St Ignatius Loyola, and why time is greater than space

Fr Frank Brennan preached at Mass at the Secretariat of the Australian Catholic Bishops Conference on the Feast of St Ignatius. As the Church in Australia prepares for the 2020 Plenary Council, Fr Brennan pointed to the example of Ignatius and how he engaged with different viewpoints in the Church.

It is a delight for a Jesuit to be invited to preach at a Eucharist on the Feast of St Ignatius Loyola for the General Forum of the Executive Secretaries of the Australian Catholic Bishops Conference. 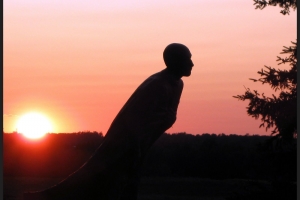 Pope Francis, himself a son of Ignatius Loyola, is fond of telling us that time is greater than space – a challenging proposition for those of us who spend a considerable time at 30,000 feet flying over vast portions of the Great South Land of the Holy Spirit.

Francis warns us against preferring space and power over time and processes. In Evangelii Gaudium, he said, ‘Giving priority to time means being concerned about initiating processes rather than possessing spaces… What we need, then, is to give priority to actions which generate new processes in society and engage other persons and groups who can develop them to the point where they bear fruit in significant historical events. Without anxiety, but with clear convictions and tenacity.’

I had cause to contemplate Pope Francis’s comparison of time and space during one of my favourite Ignatian moments of the past year when I was invited to share in the celebrations for the 800th anniversary of the Dominicans who gathered at the Convento de San Esteban in Salamanca to reflect on the Church’s involvement in human rights.

Ignatius Loyola had a hard time of it at San Esteban in 1527. He had been released from prison in Alcala and told by the authorities to go and do four years additional study before offering spiritual advice to people, and to wear ordinary clothes. He was afterall only a layman!  He was not ordained.  And he had no formal theological qualifications. And here he was daring to speak about his spiritual experiences. He sought counsel from the Archbishop of Toledo and then made his way to Salamanca to join four of his companions.

Ten to twelve days after arriving, he was invited by his Dominican confessor to come to San Esteban as some of the religious wished to see him. Then on the following Sunday the Dominicans wined and dined him and asked him some questions. ‘Why then do you preach?’ they asked. ‘About what divine things?’

This could only end in trouble. Not only was he not a member of the Order of Preachers.  He was not even ordained; he had not even studied theology. ‘When the monk saw Ignatius fixed in his resolution, “You shall remain here”, he said, “and we shall easily find a way of compelling you to make everything known.”’

Ignatius was then referred to judges. He waited three days in the monastery before being taken away to prison. After 22 days in prison, he and his companions were summoned for sentence. ‘Although they were declared to be free from reproach both in their lives and their doctrines, and were allowed to continue their work of teaching the Christian doctrine and of speaking on spiritual subjects, yet they were forbidden to draw any distinction between mortal and venial sin, until they should have spent four more years in study.’

With this constraint, Ignatius saw no option but to go to Paris and complete his theology studies. There he shared a room with Francis Xavier and Peter Faber, and the rest is history.

At San Esteban in 1527, the Dominicans had the power, the structures, the space. They had the structures of buildings, libraries, a long theological tradition, and the strictures of religious life. Ignatius had none of that. He was a lone individual on a spiritual quest.  Developing his Spiritual Exercises, Ignatius was generating new processes and engaging others who were then able to develop to the point where they bore fruit in significant historical events throughout Europe and to the ends of earth then known to Europeans.

Though Jesuits might be wary about accepting Dominican hospitality, we know that it can result only in good, ultimately, despite any temporary inconveniences or constraints on liberty. The great delight for me speaking at San Esteban was that we were gathered in the chapter house just two rooms away from where Ignatius stayed in 1527 and we were next door to the room where Francisco de Vitoria is buried.

It was as if the stones could speak at San Esteban where three of the great Dominican human rights advocates studied or lived at some stage of their lives. Being men of the sixteenth century they never thought of themselves nor were they described as human rights advocates. But in today’s parlance, they surely were three of the great progenitors of human rights and Catholic social teaching. I speak of Antonio Montesino (1475 – 1545), Francisco de Vitoria (1486–1546), and Bartolomé De Las Casas (1484-1566).

Like Ignatius Loyola, Francisco de Vitoria was a student at the University of Paris. By the time Ignatius arrived in Paris, Vitoria was back at San Esteban where he wrote in defence of the colonized Indians for over twenty years, becoming one of the founders of international law. Vitoria justified conquest and colonization but insisted that the Indians were not to be deprived of their dominion over their lands (dominium) nor were they to be enslaved.  Speaking of the Spanish conquest of Indian lands, Vitoria said:

The conclusions of all that has been said is that the barbarians undoubtedly possessed as true dominion, both public and private, as any Christians. That is to say, they could not be robbed of their property, either as private citizens or as princes, on the grounds that they were not true masters. It would be harsh to deny to them, who have never done us any wrong, the rights we concede to Saracens and Jews, who have been continual enemies of the Christian religion. Yet we do not deny the right of ownership of the latter, unless it be in the case of Christian lands which they have conquered.

The ideas, the consciences, and the deepest yearnings of these Dominicans mattered and ultimately made a difference to our world.  Within their own spaces, these Dominicans gave preference to time over space, ‘being concerned about initiating processes rather than possessing spaces’, ‘with clear convictions and tenacity’.

We are invited to do the same, whether we be contemplating the just entitlements of our own indigenous peoples in Australia or preparing ways of being Church in the wake of the royal commission and the present disrupted turbulence of our world.

On this feast of St Ignatius, we Jesuits recall the one-off event of this last year when Pope Francis addressed the 36th General Congregation of the Society of Jesus which had gathered to elect a new Superior General. Never before had the elected Jesuits and their provincials been addressed by a pope who was one of their own. We know there are some in the Church who are hoping it will never happen again!

Francis invited all Jesuits to focus on three key aspects of the life and spirituality of Ignatius.  He urged us to ask intensely for consolation, to allow ourselves to be move by the Lord on the Cross, and to do good with a good spirit by ‘thinking with the Church’.  He told our Jesuit leaders:

We walk neither by ourselves nor for our own comfort; we walk with a heart that does not rest, that does not close in on itself but beats to the rhythm of a journey undertaken together with all the people faithful to God. We walk  making ourselves all things to all people in order to help some.

This shedding of ourselves makes it possible for the Society of Jesus to always have the face, the way of speaking, and the way of being of all peoples, all cultures, by inserting ourselves into all of them, into the specific heart of each people, to build up the Church with each of them, by inculturating the Gospel and evangelizing every culture.

In this era of globalisation and in a modern Australia which is more multicultural than ever, this is an attractive vision for us all as we prepare for the 2020 Plenary Council of the Australian Church.

Let’s continue to cultivate a universal vision while retaining the humility to accept that we can only help some people. Let’s maintain hope that our Church can speak to and resonate with all people of good will. When daunted, just remember Ignatius at San Esteban en route to Paris with clear convictions and tenacity. Let’s always take time, and let’s put more faith in processes, conversations and encounters than in structures, buildings, and hierarchies.