Making a choice for change this International Women's Day

"It’s up to us – each of us – to address gender injustice wherever and whenever we encounter it. This is key to creating the world we want to live in."

“It’s up to us – each of us – to address gender injustice wherever and whenever we encounter it. This is key to creating the world we want to live in.” – Julie Edwards, Jesuit Social Services CEO

This year’s UN International Women’s Day theme, Women in Leadership: Achieving an equal future in a COVID-19 world resonates strongly for me with the campaign’s call to #ChooseToChallenge. Both present me with an invitation to pause and reflect on what kind of world I want to live in and what I’m prepared to do to help create that. It reminds me of my agency and my responsibility – personally and professionally. This invitation awaits us all. And the right starting point for this is our very selves – reflecting on the beliefs, values and attitudes we hold and how these play out in our behaviour. It seems to me that this ensures we come from a place of integrity when we then choose to speak up whenever and wherever we encounter gender injustice – at home, at work, in our communities, and in broader society. The current COVID-19 era lends greater urgency to this effort. 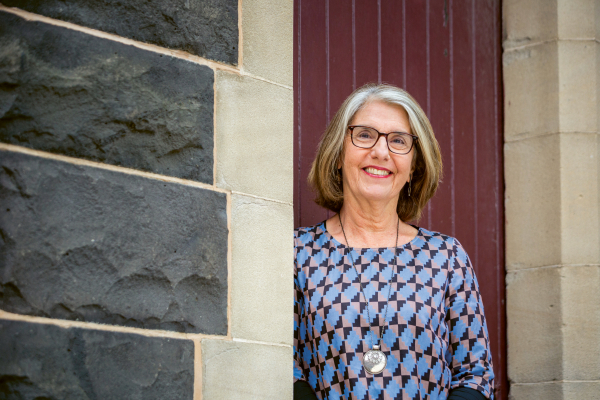 This understanding of integrity has always been important for me – in its dual meaning of wholeness and moral value. Naturally, at times I get this wrong – either when I fail to give expression to my internal beliefs and values through my actions in the world, or when my rhetoric isn’t matched by my interior life and associated beliefs and values. This is where the regular practice of reflection comes in, creating space to notice the lack of coherence between inner and outer worlds. And the outer world is much more than my own action in the world of course. It includes the context in which I live and work. Taking a realistic appraisal of that reality is a key foundation for discerning next steps. As leader of a Jesuit organisation – one that honours the process of reflecting on reality, paying attention to feelings, to thoughts, and to what the research and evidence is telling us about the reality we are observing – a couple of periods in recent years stand out as important moments in my personal and professional endeavour to promote gender justice.

The first was in 2016. I have been a feminist since my late teens and for decades I have worked with boys and men to help them take responsibility for their actions, including by accompanying them in the process of getting in touch with their deepest desires. For 20 years I have done this work in my role at Jesuit Social Services which, since 1977, has worked with boys and men who are in trouble and causing trouble. In keeping with our Jesuit identity, we say that we ‘do’ and we ‘influence’. We are in grounded relationships with people on the margins, we learn from them about what is and isn’t working in the broader society and from that point we strive to influence the policies, ideas and underlying values that foster inequality, mean-spiritedness and exclusion. After 40 years of accompanying boys and men in trouble we paused and took another look at them and their circumstances.

At that time there were a few high-profile cases that drew attention to men’s violence against women. These occurred against a backdrop of daily assaults and, on average, the murder of a woman each week. The Victorian Royal Commission into Family Violence, established in 2015 and reporting in early 2016, focused the attention of the community on this problem. This brought to the fore the challenge to do more to address systemic gender injustice. We were grateful to see women’s services finally receive some of the attention and resources needed. At the same time, at Jesuit Social Services our particular expertise was with men, and we felt challenged to consider what more we could do to keep women and children safe. I heard so many women’s voices appealing for more to be done to hold men accountable and to help them be their best selves. Jesuit Social Services responded to this call on the occasion of our 40th anniversary in 2017 by establishing The Men’s Project to do just that – taking a pro feminist approach in accompanying and supporting boys and men to live respectful, accountable and fulfilling lives free from violence and other harmful behaviour.

The moment was right. The veil was being lifted from the eyes of many in the community as courageous girls and women shone a stronger, more persistent light on the injustice they suffer. And since then, they have increased the reach and intensity of that light – including through the momentum of the #MeToo movement which followed soon after through to the recent events and accounts of rape allegations and sexual assault of schoolgirls by their male counterparts.

At Jesuit Social Services we often say we address unmet and unpopular need. One of the Universal Apostolic Preferences of the Jesuits is to ‘walk with the excluded’. Women bear the brunt of gender injustice, so in that sense they are better understood as the excluded in this situation. Our choice to walk with men comes from a desire to protect women and children, and also in recognition that the problem of male violence and what work needs to be done with boys and men is, in the main, a matter that is pushed to the margins or ‘excluded’. Let’s face it, signing up to work with men who abuse women and children, or who are at risk of doing so, is not a popular choice – but it must be done if we want to ‘choose to challenge’ the existing state of affairs.

The COVID-19 experience of 2020 until the present time was the second period in recent years where I felt challenged to reassess my personal and professional commitment to gender justice. The reality is that the pandemic has impacted unequally on people and communities, exacerbating existing fault lines in society, including gender injustice. Across the world, there are reports of women front line health workers bearing an unequal share of the burden of the disease, an escalation in family violence and, in some places, the economic path to recovery favouring industries where men predominate – such as large infrastructure builds. We need to be alert to how pre-existing conditions play out, entrenching and often worsening the existing reality of gender injustice. This remains a challenge for us all.

This International Women’s Day I am reminded that professional, thoughtful, informed and compassionate interventions to promote gender justice are essential. But, more than ever, I see that it’s up to us – each of us – to address gender injustice wherever and whenever we encounter it. This is key to creating the world we want to live in.