The annual fundraiser for Jesuit Mission invites us to lift our eyes and hearts and so to reach out to others less privileged than ourselves.

The day gathers young and old to support the work of Jesuit Mission, including the work of Jesuits in Hazaribag in India. It involves much preparation beforehand and much work on the actual day. There are stalls, events and many forms of entertainment to get ready. Many people return each year and reconnect with friends. 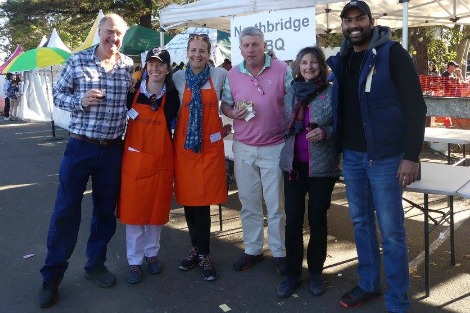 The Bazaar is enjoyable because it builds on the generosity of those who volunteer their time and effort, some over weeks and months. It is successful because so many people come to the Bazaar to offer their financial support for the work of Jesuit Mission. Both groups come together to make this a major event.

The particular relationship between our Province and the Province of Hazaribag goes back some 66 years, when Australian Jesuits first went there. Since 1952 more than 50 Jesuits, Australian and New Zealander, have spent time in India.

Santosh was appointed as Provincial in late 2016 and belongs to the Oraon tribal group. This is his first visit to Australia. Bob comes from Hawthorn in Melbourne. He left Australia as a young Jesuit for India some 60 years ago.

Our financial support for the Hazaribag Province continues to be important. Apart from its pastoral, social and spiritual ministries, the Province currently educates more than 24,000 students and runs 15 student hostels. But our support and our friendship are even more important than the money we raise.

The Bazaar invites us to lift our eyes and hearts and so to reach out to others less privileged than ourselves. It calls us to learn about them and share our resources with them. What we give of ourselves through the Bazaar will enable people distant from us to enjoy a good education, a healthy upbringing and a fulfilling life.

For all of us this is a taste of the Kingdom Jesus came to bring.