Youth that comes from freedom

Father General Arturo Sosa inaugurated the Jubilee Year of Saint Aloysius Gonzaga at the Church of Saint Ignatius in Rome, on 9 March. About 100 priests concelebrated with Father General, and a large congregation participated in the Mass. The Aloysian Jubilee Year will run from 9 March 2018 to 9 March 2019.

Aloysius Gonzaga (1568-1591) gave up a privileged life and a princely inheritance to live the vows of religious life even to the point of contracting the plague because of his selfless care for people already sick with it. He was the eldest son of the Marquis of Castiglione, and heir to the family title. The Gonzagas were known as patrons of Renaissance artists, and they ruled what amounted to a kingdom.

Below is Father General’s homily at the inauguration of the Aloysian Jubilee Year.

The youthfulness of Saint Aloysius Gonzaga is not only a matter of age. It is youth that comes from freedom, the freedom to discern to make decisions in harmony with God’s plan, and the willingness to lead a life consistent with that choice. For this reason, we welcome the happy coincidence of the dates of the Aloysian Jubilee Year, the death of Stanislao Kostka, the Synod on youth, faith and vocational discernment, and World Youth Day. 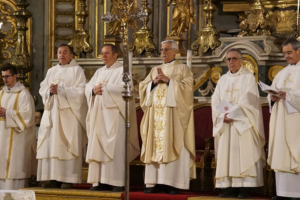 The freedom that makes us young people is the result of the liberation that humanity receives from the Incarnation and Resurrection of Jesus. Jesus, the Son, who became one of us, opens the way to liberation, the fruit of love that gives life, because we all have life in abundance. The encounter of every human being with Jesus frees us from everything that prevents us from following the path of the gift of love. The encounter with Jesus changes our way of seeing, what our narrow gaze has imposed upon us.

Liberation in Christ invites us to take the paths we have never imagined before. We do not know where the road will lead us; but it is not necessary to know because this acquired freedom derives from faith, it derives from trust placed only in God, who will guide us with his Holy Spirit. Freedom consists in maintaining our entire trust in God alone, and in letting ourselves be guided towards Him along the paths that he wants to reveal to us at the time.

From the moment he was liberated in Christ, Saint Paul affirmed: I consider everything a loss because of the surpassing worth of knowing Christ Jesus my Lord, for whose sake I have lost all things. I consider them garbage, that I may gain Christ and be found in him, not having a righteousness of my own that comes from the law, but that which is through faith in Christ – the righteousness that comes from God on the basis of faith. (Phil. 3:8-9)

To make oneself young, leaving infancy behind, means to go out of oneself, to accept that the centre of real life lies outside of us, in the love that we have received. The experience of being loved is the source of liberation, after which it is possible to make fundamental decisions. To make an election, in the language of Ignatian spirituality. Young people dream of a different life, better than the one they know around them. Inner freedom awakens the desire to contribute to making this better life real, and leads to the need to choose a way to do so.

Youthfulness is also the ability to discern in such a way as to find, in one’s inner movements and in the experiences of one’s own history, how the Lord continues to act in the world, and to confirm the call to follow him. The call to help reconcile human beings with one another, and to take care of our common home, this universe in which we live with such neglect, and also with Him, our creator.

Discernment demands that we live free from the rules that impose offerings and sacrifices on us in the name of God. That we follow love as the only way of true life and the only commandment, as the scribe who says to Jesus: ‘Well said, teacher’, the man replied. ‘You are right in saying that God is one and there is no other but him. To love him with all your heart, with all your understanding and with all your strength, and to love your neighbour as yourself is more important than all burnt offerings and sacrifices.’ (Mk 12:32-33). This is what Ignatius calls indifference to any social, family or other kind of pressure that limits the willingness to set out on the road, having as sole guide the Holy Spirit.

Freeing oneself is a process of conversion, through which the experience of the Father’s merciful love allows the forgiven sinner to prepare oneself to love one’s neighbour as oneself, to listen to the Son’s call to offer oneself, to contribute to the proclamation of the Good News of the Gospel. Freedom, experienced as indifference, brings us closer to others, to those who are different, to those who are most in need… to all those who are discarded by a sin that has become a social structure of exclusion. By approaching them as fruit of having experienced the closeness of the Lord, we make ourselves close and ready to be sent, so that we may in all things love and serve.

Young people also have enthusiasm and a strong desire to dedicate themselves totally to accomplishing what has been chosen. For the young man, the liberating experience of mercy, which frees him, is not enough. The conversion that leads him to choose to follow Christ and be sent is not enough. The young man puts all his energy into making real what he has dreamed, desired and decided to do. The young man, as the verse of the Psalm says, which composes the antiphon of today’s Eucharist, is the one who has innocent hands and pure heart: he will ascend to the mountain of the Lord, and will remain in his holy place. Innocent hands and pure hearts are the fruit of conversion, which leads to freedom and the desire to love and serve in everything. It is to set out on the road and climb to the mountain of the Lord, collaborating with his mission of reconciliation in this world.

The Eucharist that we celebrate to start this Jubilee Year of St. Aloysius Gonzaga is a good opportunity to ask the Lord for the grace of this youth, with which our heart remains in tune with His plan for the liberation of humanity, and we give ourselves totally to make it possible.