Young people carry our mission into the future

Last weekend I was in Sydney for the Jesuit Mission Indian Bazaar. I was particularly struck by the efforts of the young volunteers. By Fr Brian F. McCoy SJ, Provincial

Last weekend I was in Sydney for the Jesuit Mission Indian Bazaar. It was a lively, warm and sunny day at St Ignatius College, Riverview, raising funds for Jesuit Mission’s work in supporting communities in need beyond our shores. The Bazaar has been going now for more than 60 years. 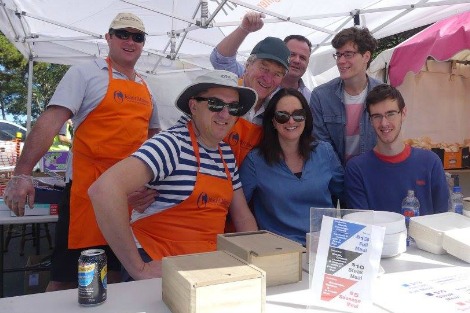 Each time I come to this event or the Melbourne equivalent, the Maytime Fair at Xavier College, I am struck by the generosity of people who give up so much of their time and effort to make it such an enjoyable fundraising day. Some have done it for years, even decades, beginning with families and friends supporting those Australian and New Zealand Jesuits who first went to India in the 1950s.

Since then our fundraising has expanded to include support for projects beyond India, in our Asia Pacific region. These are now important friendships, linking our Province with others.

I have become increasingly aware of how much it takes to prepare for the Bazaar. It involves so much care and conversation, the guidance of the event committee, and the support of the school community.

This year I was particularly struck by the efforts of the young volunteers. Some Riverview old boys were in their second year of organising a rugby 7s competition, and young people from the Cardoner Project were running stalls of drinks. There were also many other young people volunteering on the day.

I met two high school students who have been volunteering on a regular basis to help in the Jesuit Mission office. They were there all day on Saturday working at one of the stalls — they were young, happy and enthusiastic.

At the end of the day there is the task of cleaning up, a job which continues into the next morning. It is then that the school boarders move in, moving, clearing and cleaning, doing whatever needs to be done.

Such times remind me of the goodness and generosity of our youth. Often, we cannot see the fruits of our labours, but when young people become involved we know something valuable is being held and carried by the next generation.

The challenge of Jesuit Mission to support those in need will continue into the coming years. We have good reason to have confidence in those who rally and generously respond, and particularly in those young people who now are becoming involved.