Young Australians make a difference for ethnic minorities in Thailand

The local dishes are way too spicy, the lodgings are fairly basic and the amenities aren’t top-notch either. The nearest town is almost an hour’s drive away and it takes 20 minutes on a bike just to get to a market. All told then, spending a whole year in a remote part of northern Thailand may not seem all that enticing. 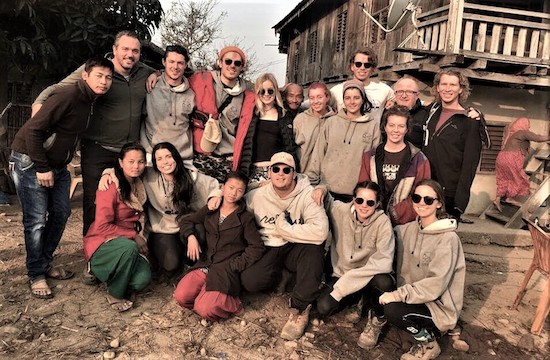 ‘We’re pretty much in the middle of nowhere,’ attests James Dunlop, a fresh-faced Australian teenager who has been volunteering in the mountainous province of Chiang Rai with its hamlets of bamboo huts for the past four months and is planning to stay for another eight. ‘We’re quite isolated.’

Then there are the occasional scares. The other day during lunch in a school canteen Dunlop glanced to his right only to discover a 2m-long snake lying curled up on the adjacent chair. ‘It was quite scary but funny at the same time with a lot of students cowering on tables and chairs,’ he recalls.

It’s been quite a change for the 19-year-old Catholic school graduate from his usual lifestyle in Sydney. But despite his relative privations he’s loving it. ‘The first month or so I was a bit out of my depth, but it’s been getting better and better every day,’ he says.

‘People here have started to feel like family,’ explains Dunlop, who plans to study civil engineering when he returns home next year. ‘They’re very open and friendly,’ he elucidates. ‘You could be walking down a street and meet a random Thai person who might invite you back to their house for lunch. The locals are really welcoming.’

Those 80 new friends are the ethnic minority youngsters who currently study at Xavier Learning Community, a newly launched Jesuit school for high school graduates in the remote Mae Chan district of Chiang Rai where Dunlop is one of several foreign volunteers who teach English.

The institution’s students range from 17 to 28 years of age and are mostly ethnic Karen who are predominantly Catholic. A number of students belong to other hilltribes like the Akha, Lahu and Hmong and hail from villages in the Golden Triangle.

A wedge of land carved out by the borders of Thailand, Laos and Myanmar (formerly Burma), the Golden Triangle was once the epicenter of the global opium trade. The area is home to a smattering of hilltribe communities in which locals eke out a living by growing crops and peddling handcrafted souvenirs to tourists.

For many local youth the Catholic school is the only place of higher learning available. XLC, which is overseen by the Jesuit Foundation for Education in Thailand, opened its doors last August for 40 students and has recently had a new building constructed so now twice as many hilltribe youth can study there. The institution will soon become Xavier College where up to 160 local youth can major in three four-year streams: English for Eco-Tourism and Hospitality Management, English for Sustainable Business Management, and English for Teaching.

‘I’ve had the good opportunity to study here,’ says Oayporn Paikhao, 24, an ethnic Karen woman who comes from a village of subsistence farmers near the Burmese border. ‘Education is really important for us,’ she explains. ‘In my village some young people get married early and never finish school. One of my cousins has just got married at age 16.’

In impoverished hilltribe villages child marriages continue to be commonplace, blighting the prospects of many local youth, especially girls, who wind up with no employable skills. Oayporn, who studied with Catholic nuns before coming to Xavier Learning Community (XLC), wants to do her part in breaking this cycle of poverty in her home village.

After almost a year at the school she speaks near-fluent English and wants to be a tour guide. ‘Many foreigners come to visit our village and I want to tell them about our lives,’ she says.

Other students at XLC are harboring similar ambitions. A young man who comes from a village where functional illiteracy remains widespread hopes to open a book store to foster a culture of learning in his community.

“Many of the students are very ambitious,’ Dunlop says. ‘They’re very diligent and stay up studying until midnight,’ he explains. ‘XLC gives them an edge and a chance for a better future. It opens up a lot more windows for them.’

But it isn’t just the ethnic minority students who are learning. So are the foreign volunteers. By being immersed into a different culture, they’re learning new ways of seeing and doing things. Chief among them are a reflexive spirit of camaraderie and an ethos of mutual support that prevail among local villagers. ‘It’s amazing to see how everyone helps everyone else,’ Dunlop says.

‘If you’re good at cutting hair, you might give someone a haircut,’ he adds. ‘If you’re a good cook, you might help out in the kitchen. If you’re handy with a hammer, you could help out by building a house. Students don’t have to do these things, but they do it because they want to help others.’

During their year-long stints foreign volunteers like him also learn the virtues of self-reliance, forbearance, initiative and leadership. ‘I’m a great believer in giving young people opportunities to lead,’ says Father David Braithwaite, a Jesuit priest who is the founder of a volunteering network for Catholic college students in Australia called The Cardoner Project.

The initiative has been so named after the Spanish river on whose banks the Basque theologian St. Ignatius of Loyola, who founded the Society of Jesus in the 16th century, experienced some of his visions. The Sydney-based priest’s ministry sees some 40 Aussie undergraduates like Dunlop heading off on yearlong volunteer missions annually. Scores of other youngsters sign up for shorter stints in various developing countries.

‘One of our aims is to develop bonds of solidarity among people (from various backgrounds),’ the priest says. ‘The idea is that our volunteers learn to serve others and participate in helping forge a sense of community.’

Often the young volunteers end up feeling they belong to the foreign communities they come to help. ‘Some of them can find it difficult to integrate back into life in Australia because that sense of meaning and purpose they experienced out there was so intense, whether it be in Sri Lanka or Nepal or Thailand,’ Father Braithwaite says.

‘It’s a similar story every time: they don’t want to leave and when they do come back, how do they find that purpose in life here?’ the priest says.

‘These are very talented young people who can have their pick of a highly paid job here – in a consultancy or a bank, say,’ Braithwaite adds. ‘But one of them recently said to me, ‘You’ve ruined us. You’ve ruined us because we don’t want those jobs anymore.’’

He chuckles. ‘But that’s a wonderful problem to have,’ he adds.

Many former volunteers are now looking for work in humanitarian development and other fields aimed at helping disadvantaged communities. ‘It’s incredibly affirming to me as a Jesuit, of course, but for them it can be genuinely life-changing,’ the priest says. ‘They have something we often seem to have lost (in the West), which is a sense of purpose and belonging.’

Dunlop himself is discovering just that sense of purpose and belonging. ‘I thought I’d be homesick, but to be honest I don’t really miss Australia that much at all,’ he says.

‘In Australia I was more attached to silly things like social media,’ he adds. ‘But after months in Thailand I’ve come to be invested in my students. I genuinely want to see them succeed and do amazing things after XLC.’