‘A very simple, dignified farewell ... does not deny the sadness of parting, but prefers to emphasise the freedom to let the other go with hope for the future and coming together once again.’

The Australian Jesuits are moving on from St Ignatius’ Parish Toowong, but Fr Brian McCoy SJ has expressed gratitude for all that the people have given the Jesuits over the last 102 years. 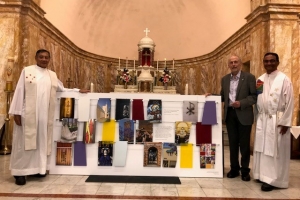 (From left) Frs Stan Lim, Brian McCoy and Gaetan Pereira with the parish’s gift to the Jesuits.

Masses were held across the weekend of 25-26 November at the parish, including a Saturday vigil service with Brisbane Archbishop Mark Coleridge. The priests of the parish – Frs Stan Lim and Gaetan Pereira – were joined by other Jesuits who have had a connection to St Ignatius’ over the years: Frs Brian McCoy, Chris Gleeson, Jack Otto, Chris Jenkins, Trung Nguyen, Ian Howells and Antonius Sumarwan.

In a homily, Australian Provincial Fr Brian McCoy spoke of how the Aboriginal people in Balgo, Western Australia, deal with the pain of parting ways.

‘I found there is no simple word in Kukatja for “hello” or “thanks” or even “goodbye”. When asked why there is no word for goodbye, they would simply say: “Saying goodbye is too sad and painful’, said Fr McCoy.

‘A very simple, dignified farewell always open and hopeful of meeting up again. It does not deny the sadness of parting, but prefers to emphasise the freedom to let the other go with hope for the future and coming together once again.’

Fr McCoy noted that it wasn’t too long ago that the parish had been blessed with the energetic presence of Fr Peter Quin SJ, along with Frs John Reilly SJ, Greg Jordan SJ and Vince Hurley SJ. However, the declining numbers of Jesuits meant that it was no longer possible to maintain that connection with the community.

‘The decision to leave this parish was not an easy one’, said Fr McCoy. ‘In the context of gratitude for all we, as Jesuits, have received in this parish over more than 100 years, it also brings with it a sense of our human frailties and our reliance on God to light the new path that we must now take.’

The weekend Masses were a chance to look back at the Jesuits’ 102-year history at the parish, and to celebrate some of the stories of people involved there.

A brief history of the parish – told in dialogue form, with various people taking on the roles of historic parish figures – was incorporated into the liturgy. One of the characters was Fr Richard Murphy SJ, the Irish priest who established the parish in the middle of World War I. Another was Sister Mary Whelan RSM, who joined the school at St Ignatius’ when it opened in 1950. Other characters talked about some of the ways parishioners engaged with the parish, as altar boys or members of women’s groups.

Parishioners presented the Province with a gift, unveiled at the last liturgy, of a collage commemorating the Jesuits’ time in Toowong.