The workshop is the latest activity of the Bookends Project, a groundbreaking initiative of the Provincial and the Australian Jesuit Province to express our commitment to justice for Australia’s First Nations peoples and for the most recent arrivals, people seeking asylum and refugees.

On Tuesday 29 May, Fr Brian McCoy SJ, Provincial of the Australian Jesuit Province, convened a gathering of Jesuits and lay representatives from Jesuit social ministries, schools, and parishes to discuss a Province-wide response to refugees and people seeking asylum in Australia. The gathering took place at St. Aloysius College, Sydney. 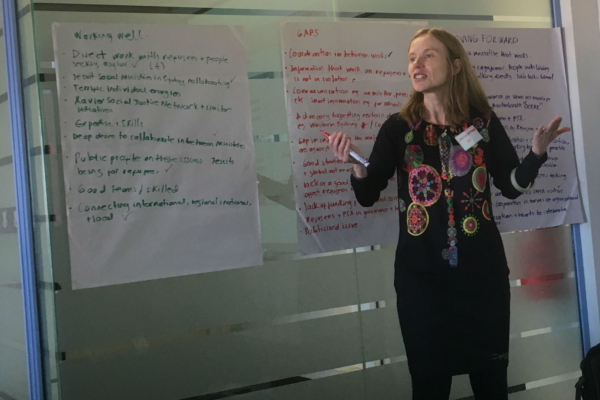 The workshop is the latest activity of the Bookends Project, a groundbreaking initiative of the Provincial and the Australian Jesuit Province to express our commitment to justice for Australia’s First Nations peoples and for the most recent arrivals, people seeking asylum and refugees.

The day began with an acknowledgment of country by Fr Greg Jacobs SJ. Based on a discussion paper, previously circulated, Anne Nesbitt, JRS’ Schools Engagement Coordinator and Bookends Project Officer, then provided an overview of the history of Jesuits’ involvement with refugees and people seeking asylum, and a survey of current initiatives and activities across the Province.

Most of the day was spent in small groups celebrating the very valuable work that is already being done and discussing key gaps in engagement, the potential for new avenues of collaboration in the future, and the ways in which these ideas might be implemented on the ground.

The key themes of the day centered around conversation, collaboration, cooperation, and coordination among ministries to improve the Province-wide response to refugees and people seeking asylum. It was suggested that a shared narrative be created across the Province.   The groups hope to continue to meet regularly and develop joint initiatives.

Going forward, the groups agreed that there needs to be a series of measures to better respond to refugees and people seeking asylum on the ground, including effective sharing of information, engagement of people with lived experiences of seeking asylum, awareness raising, initiatives to change hearts and minds, and greater employment of refugees and people seeking asylum to bring their lived experience to the workplace, among other measures. Fr McCoy commented that Indigenous people are the best placed people to welcome newcomers to this land and that the key message was to be people of encouragement and to encourage one another.

JRS Australia Director, Carolina Gottardo, expressed JRS’ strong support for the initiative, and her hope for a future of close and productive collaboration between the various arms of the Province.

‘Having a unified narrative within the Province is an excellent way to advance the voices of people seeking asylum and refugees, one of the most discriminated groups in Australia and at the same time one of the most resilient as well.’

The workshop ended with a vote of thanks from Fr McCoy, a commitment to produce a report capturing the ideas raised on the day, and to collaborative engagement across the Province going forward.