Where is our hope?

Newman College Rector Fr Frank Brennan SJ asks what is the hope that we all have as the Church community at this time? And how do we provide an answer to those who are hostile or simply politely agnostic asking us the reason for our hope.

Homily from Fr Frank Brennan SJ for the Sixth Sunday of Easter, at Newman College, University of Melbourne, 17 May 2020.

In today’s second reading, Peter has a very clear instruction for us: ‘Always have your answer ready for people who ask you the reason for the hope that you all have.’ This is a challenge for any of us in the age of coronavirus. It is an even greater challenge for those of us in the Church in this secular age of mistrust and disillusionment.

Our Australian bishops met in conference last week. They issued a statement at the conclusion of their one-week meeting telling us: ‘Now, we pray, Easter is dawning as our country recovers from the pandemic and looks to build the future. There is no room for complacency but there is certainly room for the hope that Easter brings to birth, the hope that “after you have suffered a little while, the God of all grace, who has called you to his eternal glory in Christ, will himself restore, support, strengthen and establish you”. (1 Peter 5:10-11).’ I must confess I was expecting something more programmatic, something more specifically committed, in which to put my hope.

So what is the hope that we all have as the Church community at this time? And how do we provide an answer to those who are hostile or simply politely agnostic asking us the reason for our hope. What hope can we offer to those looking for meaning, purpose and security at a time of such deep economic uncertainty and when there is no assurance that the virus might not return for a second wave and without a vaccine to counter it?

When I studied theology in the 1980s many of the leading theologians were German. They had studied theology themselves during the years of the Nazi regime culminating in World War II and the Holocaust. These appalling events were always there in the background of their writings, though rarely mentioned. I always suspected that hope was their greatest challenge. Their faith was strong, though often very intellectual. Their love for their fellow man was demonstrable, though as with all of us, limited and faulty. Their hope was not always evident, even in small doses.

Karl Rahner, born in 1904, was ordained a Jesuit priest in 1932, the year before Hitler became Chancellor of Germany. Rahner wrote prodigiously. One of his last books was entitled Foundations of Christian Faith. After a lifetime of theological reflection, he wrote, ‘Ultimately what we want to do is merely reflect upon the simple question: “What is a Christian, and why can one live this Christian existence today with intellectual honesty?”’ Addressing this question, he quoted today’s second reading from Peter’s first letter, reflecting on and justifying our Christian existence ‘before the demands of conscience and of truth by giving an “account of our hope” (1 Peter 3:15).’ He concluded his book with a chapter on ‘Christianity as Church’. He found hope in the Church as the circle of believers who ‘stand beyond all of the pluralistic confusion’, ultimately professing ‘that the absolute and living God is victorious in his self-giving love throughout the whole length and breadth of his creation.’

Born in 1927, Joseph Ratzinger like all German 14-year-old boys was conscripted into the Hitler Youth in 1941. When Pope, Benedict visited Auschwitz in 2006 saying, ‘I come here today as a son of the German people.…I could not fail to come here. I had to come. It is a duty before the truth and the just due of all who suffered here, a duty before God, for me to come here as the successor of Pope John Paul II and as a son of the German people’. He said, ‘In a place like this, words fail; in the end, there can only be a dread silence – a silence which is itself a heartfelt cry to God.’ 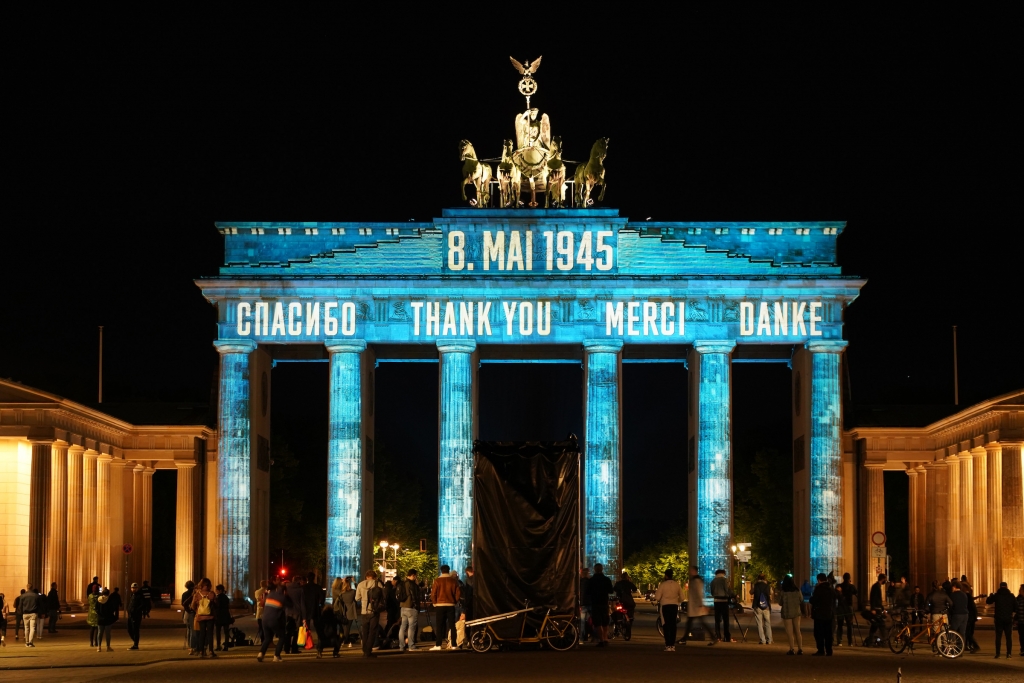 The Brandenburg Gate stands illuminated with the word “thank you” written in Russian, English, French and German as a message to the Allies who defeated Nazi Germany on the 75th anniversary of the end of World War II. (Photo by Sean Gallup/Getty Images)

A week ago, we marked the 75th anniversary of the end of World War II in Europe. The soul-searching of the German leaders and of the German bishops gives us hope. I dare say there were things they said last week which could not have been said with conviction, empathy and community endorsement for most of the last 75 years. Hope takes time to sprout.

It was a very stark scene at the Brandenburg Gate on 8 May 2020 when the German President, Frank Walter Steinmeier, gathered with just a handful of civic leaders including Chancellor Angela Merkel, maintaining all necessary physical distancing, to mark the 75th anniversary of the end of the war in Europe. They had planned to bring thousands of young people together, including those who were the grandchildren of the combatants on both sides. The president told them via the web and satellite, ‘It is you who are the key! It is you who must carry the lessons of this cruel war into the future.’ He said it had taken three generations for the German people to admit that 8 May 1945 was indeed a day of liberation – a liberation which ‘was imposed from outside’, but now an internal liberation which was ‘a long and painful process which involved facing up to the past, investigating what people knew and what they had colluded in’.

He recalled the rabbi who had written ‘No heart is as whole as a broken heart’, and the Israeli president who had told the German Bundestag: ‘If it can happen here, it can happen anywhere.’ The German president spoke of his hope for all the challenges ahead in the wake of the COVID-19 pandemic. ‘We do not yet know when and how we will emerge from this crisis. But we know how we entered it: with great confidence in this country, in our democracy, in what we can shoulder together. That shows how very far we have come in 75 years. And it gives me hope for all the challenges ahead.’

The German bishops have spent some years soul-searching in preparation for this anniversary three generations on. They issued a 23-page statement reflecting on the actions, stands, and silences of their predecessors: ‘By the bishops not opposing the war with a clear “no”, but rather strengthening the will to hold on to it, they were complicit in the war.’

Looking to the future, the German bishops said they had rediscovered that the message of the gospel does not end at national borders and that solidarity should not be limited to one’s own people. ‘Overcoming all suffering worldwide corresponds to following Jesus.’ President Steinmeier also expressed this universal theme when he said, ‘“Never again”, we vowed after the war. But for us Germans in particular, this “never again” means “never again alone”.’

Welcoming the German bishops’ statement, the president of the Polish bishops conference said, ‘This is an exceptionally courageous unilateral act of guilt admission. Its bravery can be seen particularly where the German bishops speak of how much their Church formed an inseparable part of wartime society, and confess that it was thus entangled in the war.’

Back in 1987, I spent some time in a large refugee camp on the Thai Cambodian border. I had gone there thinking that I might at least bring the people some hope. One day I greeted a man, asking how he was, pointing out that it was a fresh sunny day. He looked at me downcast. I realised at that moment that it was all very well for me. I was there as a volunteer, doing good. I could leave whenever I wanted to. He looked at me, simply saying, ‘It is fine for you, but I am a Khmer’. He had no choice about being there. He had no options. He had nowhere to go. All he could do was wait. I went home that night wondering what was the point of my being there. I could not bring him hope as if hope were a bag of fresh vegetables. I had a simple insight. A day might come when that Khmer man would find hope and he would want to express that hope to someone. I might be that someone. If hope remains unexpressed, it dies.

That’s why we hang in with the Church – our circle of believers, described by Karl Rahner as those who ‘stand beyond all of the pluralistic confusion’ ultimately professing ‘that the absolute and living God is victorious in his self-giving love throughout the whole length and breadth of his creation.’ Practising our solidarity universally, let’s pray and hope for that Spirit of truth which Jesus promises in today’s gospel as we profess that the living God is victorious in His Self-Giving, across all borders, throughout the length and breadth of the whole creation.