We are called to listen

'We are each called to listen and be messengers of God’s mercy. We are grateful for those who witness to this important and much needed call at this time.' Fr Brian F. McCoy SJ reflects on the ordinations of Nico Lariosa and Alan Wong.

When Pope Francis invited priests to be Missionaries of Mercy in 2015, I was surprised to learn that only two Australians, out of some 1000 people across the world, applied. One was our own Jesuit Fr Richard Shortall.

My surprise further increased as I witnessed something of Richard’s work, and received feedback about his two years of ministry in the Newcastle-Maitland Diocese.

It seems to me, in this vast land of Australia, that Pope Francis offered us a very appropriate and helpful model of ministry — one particularly relevant, but not limited, to remote and rural Australian parishes.

Having someone available with a ‘listening ear’, visiting parishes a week at a time, seemed to be something our Church has needed and continues to need, not just ‘out bush’ and at our geographical peripheries, but everywhere.

We are presently undergoing great change in our Australian Church, some of it influenced by the Royal Commission into Institutional Responses to Child Sexual Abuse. At the heart of such change is the need for people to be ‘heard’, to have their ideas respected and their past hurts, concerns and hopes for the future recognised.

This call to listen comes with the gift of mercy, as Pope Francis has often said, and is for all the baptised to express, not just the ordained. It is made with particular seriousness to those called to ministry, especially priests and deacons. 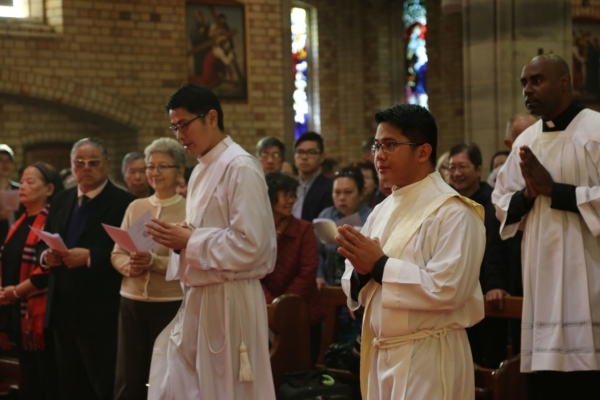 This year we are blessed in our Province to have three priestly ordinations. We celebrated the ordination of Rob Morris SJ in Christchurch two weeks ago, and of Alan Wong SJ and Nico Lariosa SJ in Sydney this past weekend.

We rejoice in the gift and generosity of these men. Their commitment causes us to reflect on what it means to live this ministry of mercy on behalf of the gospel of Jesus, particularly in the Australian (and New Zealand) Church today.

At times ordained priests, like the rest of us, will be asked to listen carefully and sensitively to those seeking a ‘listening ear’, whether in offering the sacrament of reconciliation, visiting the sick or in simple, ordinary day-to-day conversations.

Such ministry can be described as listening to another’s heart, allowing them to experience the merciful presence of God.

Pope Francis once said, ‘God never tires of reaching out to us. He is always ready to listen.’ The calling of Rob, Alan and Nico is one of further encouragement to generously live our own, personal baptismal call.

We are each called to listen and be messengers of God’s mercy. We are grateful for those who witness to this important and much needed call at this time.