The events that commemorate National Sorry Day and Reconciliation Week are among the most important in the nation, writes Saint Ignatius’ College Riverview Principal Paul Hine. First Nations students led the students in a moving Reconciliation Ceremony last week. There is much to ponder, much to embrace and much to change. But it must be done together.

In my personal view, the events that commemorate National Sorry Day and Reconciliation Week are among the most important in the nation. There are few that compare with the need to confront a hidden, fractured and broken past, to pursue a new way forward where all Australians – Indigenous and non-Indigenous – will have equal access to opportunity and outcome. 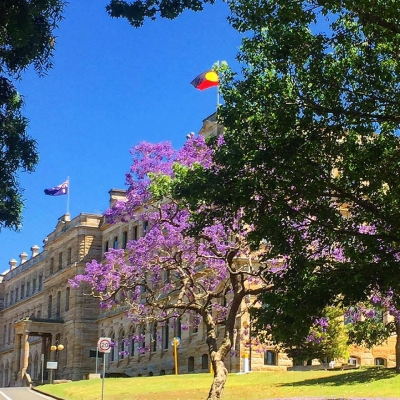 In the theme of the Reconciliation Assembly held at the College during the week, we are indeed all ‘in this together’.

Tuesday 26th May was National Sorry Day. It acknowledges the mistreatment of Aboriginal and Torres Strait Islander people who, over generations, were forcibly removed from their families and communities. Now referred to as ‘The Stolen Generations’, it is time for all Australians to carry sorrow for the loss and the pain experienced by families who were forced apart, whose generational stories have been irreparably damaged and who now live under a shadow of grief and loss. This represents a blighted chapter in the history of our nation, one which we must confront and be truly sorry for. National Sorry Day is a time for recognising loss and for lament and how we each have a role to play in the healing of our people and our country.

Two other dates are significant at this time of year, May 27th and June 3rd. They bookend Reconciliation Week and denote landmarks in Australian political, social and cultural history.

The first is the date of the national referendum conducted in 1967, in which Australians voted overwhelmingly to amend the Constitution to allow the Commonwealth to make laws for Aboriginal people and include them in the census. It was a long time in coming – too long – and it forced the Australian government in policy and practice to abandon assimilationism and embrace self-determination, reconciliation and more recently, ‘closing the gap’.

On 3 June 1992, the High Court of Australia determined that ‘terra nullius’ should never have been declared at the foundation of settlement. It asserted that Australia was deemed to be legally ‘unoccupied’ and accordingly saw the forfeiture of rights of Indigenous people to their land. The High Court, which eventually upheld Eddie Mabo’s claim to tribal lands, paved the way for the Native Title Act in 1993. Sadly, Eddie did not live to see his struggle for recognition consummated in his lifetime.

Over a quarter of a century later, we still have a long way to go to understand the destructiveness of colonial policy and the residual hurt and disadvantage it continues to cause in Australian society. There are currently considerable differences in life outcomes between Indigenous and non-Indigenous Australians. In education, health, and the criminal justice system, ‘the gap’ identified between First Nations people and other Australians in the middle of the 20th century remains painfully apparent.

Institutional change is a slow and cumbersome creature, and the redress that has been called for on a national level is in need of constant and passionate attention. Such was the impetus behind the Uluru Statement of the Heart, which called for a sustained period of ‘truth telling’ and ‘makarrata’ – a Yolngu word meaning ‘restoration after a period of struggle’. The Statement concludes:

‘In 1967 we were counted, in 2017 we seek to be heard. We leave base camp and start our trek across this vast country. We invite you to walk with us in a movement of the Australian people for a better future.’

We have been offered a way to move ahead as a nation. Until that opportunity is embraced, despite the fluctuations of national issues, global pandemics and all manner of events, we will all be impoverished.

One of the many distinguishing features of Saint Ignatius’ College Riverview is its commitment to First Nations education. Why? The reasons are many and all too obvious, but the real impulse is that education represents the fulcrum of change. The educational program has a vision of developing a generation of First Nations boys who will become informed, passionate and committed citizens, It is designed to equip these boys with the knowledge and skills to become leaders in their communities. And those in the institution of education realise that it is a reciprocal process, for as our boys are being formed, so too are our First Nations’ boys educating us. We have the benefit of growing in understanding and appreciation of Indigenous history and culture, as we walk this road together.

Our First Nations boys led us in a moving Reconciliation Ceremony on Wednesday. Kyle Wallace shared the painful story of his grandmother who suffered the ravages of discrimination and alienation. Two Year 8 boys had the courage to speak about the disadvantage that exists in their country towns and the challenges that they face dealing with racism on a daily basis.

We have a long way to go and I commend our First Nations boys who commit to educating us about their story and how we can move ahead. And move ahead we must. The sentiments of the Uluru Statement of the Heart apply to all who subscribe to the cause of human dignity, justice and equity:

‘When we have power over our destiny our children will flourish. They will walk in two worlds and their culture will be a gift to their country.’

There is much to ponder, much to embrace and much to change. But it must be done together.