Walking as a global network at the service of mission

Over the last ten years, significant energy and resources have been devoted to further developing the global network of Jesuit schools. Within Australia, there are five Jesuit-owned and governed schools: Xavier College in Melbourne, Saint Ignatius’ College in Adelaide, and three of us in Sydney – St Aloysius’ College, Redfern Jarjum College, and ourselves. In addition to this, there are five Jesuit Companion schools. Four of these schools, Xavier Catholic College (Hervey Bay), Xavier Catholic College (Ballina), Saint Ignatius’ College (Geelong) and Loyola College (Watsonia) are diocesan high schools, and the fifth Companion school, John XXIII College (Perth), is an independent Catholic school that commenced in 1977 following the amalgamation of Loreto College and St Louis School for Boys which had been a Jesuit school from its beginnings in 1938 until 1971.

For each Companion school, there is a desire for and commitment to the Ignatian charism, spirituality, and pedagogical approach to be at the heart of their way of proceeding, informing their teaching and learning and other programs within their Colleges.

Our network of ten schools within the Australian Province is part of a larger global network of 827 Jesuit schools which educate over 850,000 students and employs over 51,000 people. In addition to this, there is also the Fe y Alegria Network of schools that Jesuits began in Venezuela in 1955. This network operates just over 1,600 schools in some of the poorest and most underprivileged communities in 18 countries across the world. The other expression of Jesuit education is the work of Jesuit Refugee Service which runs over 60 educational projects offering formal, informal and online instruction for refugees of all ages across the world. 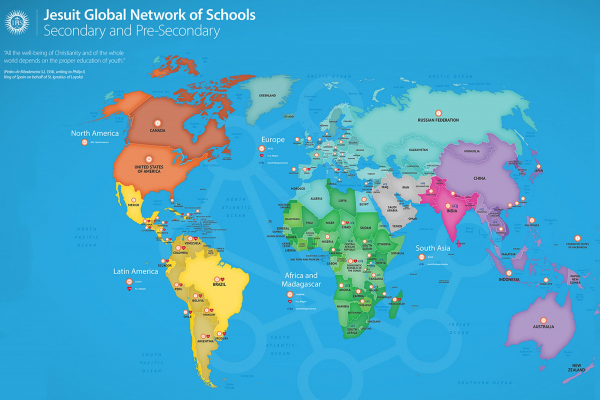 As part of the move towards learning from our global experience of education, a nine-year cycle of global gatherings was established beginning with the first global colloquium on Jesuit education which took place in Boston USA, in 2012. I was privileged to attend this colloquium with around 500 delegates from across the world. The theme of the colloquium was ‘The World is our House’ drawing upon some of the insights of Father Jeronimo Nadal SJ, who worked closely with Saint Ignatius in shaping and forming the early mission of the Society of Jesus. One of the concrete outcomes of the first colloquium was the establishment of a global online community of Jesuit educators, Educate Magis. This platform has enabled a sharing of various pedagogical approaches, units of works as well as online collaboration between Jesuit schools globally.

As part of each nine-year cycle, there is also a seminar. The first seminar was held in Barcelona in 2014, and its focus was Ignatian Pedagogy and Spirituality. The seminar was a smaller gathering of 80 individuals who participated in person including Mr John Gilles, our Director of Religious Formation. In addition to this, over 4,000 people joined the virtual seminar.

Then in 2017, there was a Congress of the Provincial Delegates for Education15 from around the world. They gathered in Rio de Janeiro. The outcome of this meeting was a commitment of all Jesuit schools globally to 13 concrete actions in four key areas relating to the experience of God, tradition and innovation, caring for our common home, reconciliation with God, humanity and creation and being sent in a global network.

This first cycle of gathering culminated in a new document on Jesuit education launched in 2019, called Jesuit Schools: a Living Tradition in the 21st Century – an Ongoing Exercise of Discernment. This document outlines ten global identifiers of Jesuit schools, drawing upon the fruit of discussions, reflection, and discernment across the global Jesuit network of schools and informed by the recent directions given at General Congregations 35 (in 2008) and 36 (in 2016) of the Society of Jesus and the four universal apostolic preferences for this decade.

These contemporary expressions of a Jesuit approach to education helped inform our College’s strategic planning process that was undertaken in 2019 and 2020, resulting in the launch of the College’s Strategic Directions 2020-2025.

Now, the second nine year cycle of gathering for Jesuit education has begun. Throughout 2020-2029 the focus is “walking as a global network at the service of mission”. This also happens to be the 8th global identifier of a Jesuit school. The second colloquium on Jesuit education was to be held last year at the Jesuit university, Sanata Dharma, in Jogyakarta. As we all know, the current global pandemic meant that this was not possible. However, in the upcoming holidays, Principal Dr Paul A Hine and I will join around 500 other delegates from Jesuit schools across the world in a virtual colloquium from 28 June 28 – 1 July. As part of the preparation for the virtual colloquium there are eight pre- recorded keynote addresses focusing on four strands:

I am looking forward to engaging with this colloquium and in time sharing with the school community the fruit of this gathering. As we continue to celebrate the Ignatian Year, reflecting on Father General’s invitation to see all things new in Christ and learning from the example of Saint Ignatius, may we continue to embrace the living tradition that began in 1548 with the first Jesuit school in Messina, Italy.