Fr Trung Nguyen SJ, Rector of Jesuit Mission, described the more than $2.45 million raised through the fair since the year 2000 as 'a phenomenal contribution' in support of Jesuit Mission's work.

Thousands of Victorians attended the 66th Maytime Fair at Xavier College over the weekend, joining a community-wide expression of faith and solidarity with vulnerable families living in poverty. 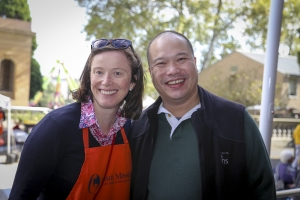 All proceeds raised from the annual fair support Jesuit Mission’s programs in over 10 countries, empowering women, men and children to live full and free lives.

‘As the dust settles on the fair, it is clear that yet again it has been a wonderful success’, said Chair of the Maytime Fair Committee, Ms Jo Bell.

‘We thank everyone who came and supported the 2017 Maytime Fair. We are thankful that the sun shone in the morning to welcome the fair-goers, and that many braved the rainy and cold afternoon to stay for the day.’

Bell expressed particular gratitude for the ‘generosity of spirit’ of the many stallholders, whose tireless efforts each year help make the event such a success.

‘Each year, we are in awe at the quality of produce, entertainment and creativity by all friends of Jesuit Mission in the various stalls and attractions’, she said.

She noted the addition of new cuisine options this year, including a Vietnamese stall hosted by St Ignatius’ Richmond Parish, the Hong Kong Waffle and Ice-cream Troup, and fresh Vietnamese summer rolls and more from Roll’d.

‘Our thanks goes to all the school parent associations, students, parents, staff, local schools and the community who contributed to make the day a success’, she said.

Fr Trung Nguyen SJ, Rector of Jesuit Mission, noted the ‘steadfast commitment from parishes, school communities and the wider Xavier family’, which remains resolute despite the ‘small changes’ that occur at the fair each year.

‘Hundreds of parents, students, teachers, leaders and volunteers young and old spend hours, days, weeks and months in preparing for the fete’, he said. ‘Their generous gifts of time, skills, spirit, enthusiasm and passion are what make the day a success.’

He described the more than $2.45 million raised through the fair since the year 2000 as ‘a phenomenal contribution’ in support of Jesuit Mission and its partners’ work ‘to uphold the innate dignity and promote the rights of God’s most vulnerable people’.

‘My Jesuit brothers and our international partners greatly appreciate and value the community support’, he said. ‘These expressions of faith and love enable our Jesuit family to promote a faith that does justice.’

‘We are truly blessed’, added Bell, ‘to have the opportunity to work and come together as a Jesuit Mission family in support of families we will never meet — this makes all the hard work, sore feet and tired legs absolutely worth it.’