Father Phillip Crotty (generally known as Phil) embodies much of the history of the Australian Province’s long and beneficial association with India and its mission in Hazaribag (begun in 1951). 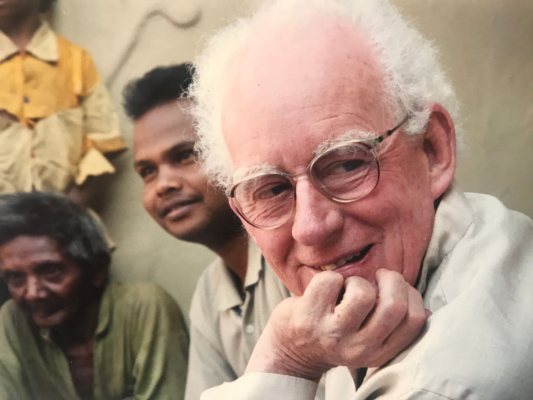 Born in regional Victoria and educated by the Marist Brothers, he knew as a schoolboy that he wanted to be a missionary. He belonged to the first generation of scholastics to make the long (and, it was assumed, one-way) journey on the SS Multan to India in December 1952. Based there for 48 years, he became a pillar of the Hazaribag mission, enabling it to grow into a Region, then a Province. He continues to be held in high esteem there.

After studying Hindi, he entered the philosophate in Pune and did regency in Maheshmunda and Ranchi, working with younger and older students with equal facility, before studying theology in Kurseong. His theologate was exactly contemporaneous with Vatican II and the new ideas being explored in Rome stimulated a generation of students coming to grips with what inculturation meant for them. The theologate at Kurseong was renowned for its staff and students and their delight and intellectual rigour in taking advantage of the Council’s opening to the world. The lessons were not lost on Phillip, who went on to apply them in practical ways in his work among the tribal people in Hazaribag. Having done advanced studies in Hindi and learnt Kurukh (also known as Oraon), he ministered faithfully to people of all walks of life and backgrounds, from steelworkers to residents in remote villages. A man of great spiritual depth and a wonderful pastor who touched many lives, he maintained throughout his life a keen but gentle sense of humour and the eye of a curious observer of the human condition, a warm gaze which included his own foibles and weaknesses.

This deep and sympathetic understanding of the human condition and his ability to contextualise it in the light of the love of God served him well as regional superior and made him well loved by subjects and colleagues alike. He became a noted spiritual father and director, serving as Director of Hazaribag’s regional theologate from 1987-1989 and of the Region’s pre-novitiate in Daltonganj in 1998.

In 2001 he returned to Australia. With his wealth of contacts at home and abroad, he served firstly as Deputy Director (based in Melbourne) and then Director (based in Sydney) of Jesuit Mission Australia at a challenging time for the organisation. It was originally established to support the Hazaribag Mission, but as India became part of the South Asia Assistancy, the Australian Province was building ever closer and more sophisticated networks of colleagues, collaborators and mission partners around South-East Asia and beyond. Father Crotty was at the forefront of this development, while also applying the lessons he had learned from his long years in India in spiritual direction and parish work. He provided invaluable assistance to Australian Jesuits working in difficult missions overseas.

His final years were spent as assistant priest in the parish of Our Lady of the Way, North Sydney. A wise and genial companion and mentor to many, he continued to inspire benefactors and those associated with Jesuit Mission and to keep its story alive. A member of the Hazaribag Province to the end, he was always abreast of the latest developments there. He died at home peacefully, aged 89, as a much loved member of the Lavender Bay Jesuit community.

Followed by a wake at the Ron Dyer Centre

The recorded funeral service can be viewed here.

In memory of Fr Phil, and to help continue his life’s work, you can make a donation to Jesuit Mission Australia here.