Fr Gardiner is best remembered for his pioneering work in support of the canonisation of Australia's first saint, Mary MacKillop.

Australian Catholics are honouring the life and work of Fr Paul Gardiner SJ, who died on Saturday 18 March 2017, aged 93. 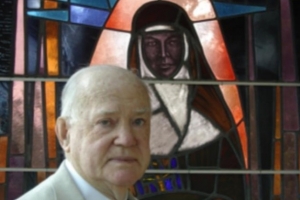 Fr Gardiner is best remembered for his pioneering work in support of the canonisation of Australia’s first saint, Mary MacKillop.

Born in Melbourne in 1924, Fr Gardiner entered the Jesuits in 1940, and was ordained in 1955. After that he spent two years at the Gregorian University in Rome, and underwent a year of tertianship in Ireland, as well as spending six weeks as chaplain to an American naval base in south-west Germany.

He went back to Rome in 1983, after being appointed as Postulator for the cause of Mary MacKillop’s canonisation. He spent six years researching and compiling the documents about her life, before putting together the case for her canonisation. The case was later published as an authorised biography, Mary MacKillop: An extraordinary Australian.

The case, or positio, was approved by the Vatican in 1993, and led to the Beatification of Mary in Sydney in 1995. Following that, Fr Gardiner worked with Sr Maria Casey on the positio for MacKillop’s second miracle. This led finally to her canonisation in Rome in 2010.

‘In Rome, it became more and more clear to me that she was a holy person’, Fr Gardiner said in an interview in 2012. ‘I got more and more closely acquainted with real holiness on earth. She gave me a living example of what the gospels are all about.’

From 1999 onwards, Fr Gardiner lived and worked at Penola, as chaplain to the Mary MacKillop Centre. Few are as familiar with the life and ministry of Australia’s first saint, and Fr Gardiner was hopeful that her example could inspire others to follow her footsteps to sanctity.

In 2012, Fr Gardiner received a Medal of the Order of Australia (OAM) for his contribution to the canonisation cause. A biography of his life, A Long Journey, written by close friend Margaret Muller, was released last year.

‘A most erudite and scholarly man, who studied the daily scriptures for Mass in Greek and Latin, he never lost the sparkle of his humour, and was in possession of his faculties until the very end’, says Bishop Greg O’Kelly SJ.

‘His great contribution to the Australian Church is the fact that it was his painstaking research and his defence of the case of Mother Mary before Vatican committees that helped bring about the very popular canonisation of the one who became known as the saint for all Australians.’

‘His admiration of the example of Mary MacKillop was unbounded. Mary will be having a great party now with him in heaven.’

The video of the funeral Mass for Fr Paul Gardiner SJ is available online.

1969 — Sabbatical at the Collegio Bellarmino in Rome