When the news came through that John had died peacefully in his sleep in the morning of Wednesday 15 March, I happened very appropriately to be sharing a presentation on Ignatian spirituality topics with the wonderful Jesuit Mission team in Sydney. 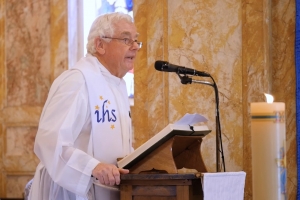 John himself was the consummate missionary. As his good friend and colleague in India, Father Phil Crotty, has written so eloquently: ‘John’s curriculum vitae reads like a Lonely Planet travel guide. He travelled the length and breadth of outback Australia as the Bishops’ representative for ongoing education of the clergy. In Manila as a lecturer in theology he accompanied his multi-cultural students across Asia. In Brisbane he was one of the inspirers of the Faber Centre for Ignatian Spirituality, but as a young Jesuit he had set out to spend his whole life as a missionary in India.’

Sadly, circumstances beyond his control restricted him to staying only 10 memorable years in India before returning to Australia in 1968. John was certainly no small thinker or petty planner. Indeed, I am told that he was appointed at one time to a parish in India and decided to move it 40 miles down the railway line to another location altogether.

With this same big thinking back in Australia, John took on a role for the Australian Bishops in caring for the Clergy around Australia in the decade from 1992 to 2001. One of his successors, Father Greg Bourke has written to us: ‘Working arduously…from the Canberra office, Fr John constantly visited dioceses and encouraged directors, bishops and clergy to embrace clergy care, education and development. Fr John retired from the position in 2001. The structure and the breadth of clergy life and ministry that we enjoy today throughout Australia is largely due to this fine pioneer who broke new ground in the care and education of clergy in this country.’

That beautiful first reading from chapter 3 of Paul’s Letter to the Philippians captures something of John’s great love for the risen Jesus. One can hear him resonating so closely with Paul’s words:

‘I believe nothing can happen that will outweigh the supreme advantage of knowing Christ Jesus my Lord … All I want is to know Christ and the power of his resurrection.’ In harmony with this passage and with the author’s permission, let me quote here Jesuit scholastic Josh Choong’s tribute to John on Facebook last week:

‘John accompanied me during the years of discernment before I entered the Society. Ever tactful and respectful of the Spirit working within me, John was gentle in his encouragement but he also knew when to push the right buttons.

‘Most significant though, was John’s long and fruitful years of Scripture scholarship, prayer and contemplating Christ, out of which he showed me a very different image of God than what I had at that time. A Christ who embraces his humanity. A dynamic and active God who is always drawing me closer. A God who is the mirror of myself. A God who gazes upon me with love and smiles.

‘Vale John Reilly SJ. Called home to Christ, with whom you will now eternally embrace and contemplate in love.’

John’s influence as a spiritual director extended well beyond the confines of Australia, of course. Outgoing Director of the Australian Jesuit Refugee Service, Aloysious Mowe, wrote to me during the week: ‘John was a very important figure to many of us in formation in Malaysia and Singapore in the 1980s, and I have had many expressions of grief and gratitude from laypeople and Jesuits from that region.’

In terms of my own experience, John was the Superior of the Toowong Jesuit Community during my very happy five years in Brisbane, the last three of which we lived together at the beautiful Santa Teresa Spirituality Centre in Ormiston. A great friend of the Cenacle Sisters who were our predecessors at Ormiston, John loved this place overlooking Moreton Bay, was Confessor to our neighbours, the Carmelite Sisters, and was very much at home here.

As a knowledgeable astronomer, most nights John would wander outside after dinner to gaze at the stars in the Moreton Bay sky — a habit aligning himself to that of St Ignatius Loyola who loved to name the stars after his companions like Francis Xavier spread across the globe. We had many wonderful conversations over meals, ranging from his progressive views in theology and his interest in the challenging ideas of Father Jacques Dupuis, his careful reading of the vagaries of politics in the Australian newspaper, and our mutual suffering at the misfortunes of the Essendon Football Club.

John, indeed, was an Essendon man through and through, having been raised at the bottom of the street where Essendon’s famous football ground, Windy Hill, was located. I remember John showing me proudly a lovely photo of himself on his first day at school in Essendon in 1934 (adorning the back cover of our beautiful order of service today) — with his sister Patricia leaning over the picket fence at home to kiss him goodbye — all beautifully captured on film by his father, Gerard, who was a well-known professional photographer for Melbourne’s Sun Pictorial in those days.

Today’s Gospel in the Jerusalem Bible translation talks about the Holy Spirit as our Advocate whose coming will not leave us orphans. As someone skilled in accompanying others in the ministry of the Spiritual Exercises, John was certainly their advocate and Counselor. This is another Facebook tribute to him written by Jesuit scholastic, Nico Lariosa, currently studying in Boston: John’s ‘wise and gentle accompaniment for five years allowed me to make sense of my spiritual experiences especially during retreats. But he was always quick to send me back to the ground, where Christian life, particularly “Jesuit life”, he insisted, “needs to be lived.”

‘Vale Fr John! Thanks for your great accompaniment and enjoy the eternal, life-giving presence of God.’

Very clearly, until the day he died, John continued to do what he had done brilliantly for the last 50 years — namely, share his love and understanding of the Spiritual Exercises of St Ignatius in accompanying an untold number of people across Australia, South East Asia and the Pacific. We thank God for John’s life, commending him to God’s loving embrace, and say: ‘farewell, John, for now.’

The video of the funeral Mass for Fr John Reilly SJ is available on YouTube. 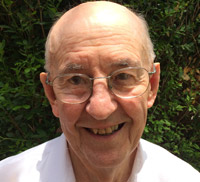 1980 — Canberra: Spiritual Exercises and seminars for various religious institutes in Australia and PNG, writer, Vatican Observer at WCC Conference on Mission and Evangelism (Melbourne, May)

1982-93 — Provincial Residence, Hawthorn, Vic.: travelling resource in theology and spirituality for priests, religious and lay leaders in East Asia and the Pacific; Provincial Delegate for Mission from 1989

then burial at Nudgee cemetery at 11.45am