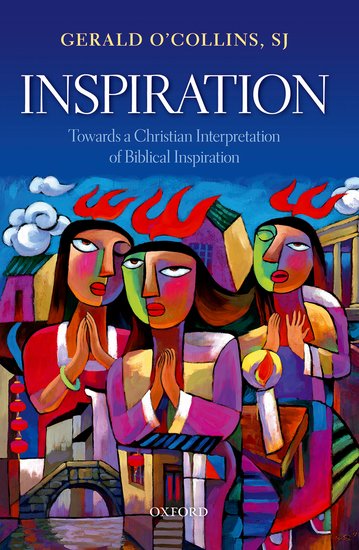 In the first chapter of Inspiration, Fr Gerald O’Collins discusses paintings of the Evangelists as they took dictation from the Holy Spirit when composing their Gospels. The dust jacket of his book features a modern painting of the Holy Spirit coming down on the gathered disciples. The two images illustrate the difference between older and more recent understandings of inspiration.

The earlier picture set inspiration in the traditional classroom. God revealed truths in writing; the scriptural writers received them passively. Inspiration was therefore strictly speaking confined to the Scriptures. Because God was the real author of the Scriptures they were truthful and without error. In a Catholic understanding, such doctrines as Mary’s Assumption that were not mentioned in Scripture came down from the Apostles by oral tradition.

The understanding in Inspiration is much broader. In it revelation, inspiration and tradition are set in the broader context of a divine relationship with humanity that involves response, interaction and development.

The inspiration of the Holy Spirit is therefore seen in the preaching of the Apostles, the faith of those who hear them, the gathering of the Christian community around the memory and presence of Christ, the writing of Scriptures, the subsequent meditation on them and the art inspired by them. Tradition represents the passing on of a lived faith within the church in different ages and cultures. God’s relationship with us and all the actions in which it is expressed involve love as well as understanding, heart as well as head.

Fr O’Collins brings to this broad theme a wealth of reference to Scripture, to theological opinions, to literature and art, and to Christian lives, in which the effects of inspiration of the Holy Spirit can be discerned.

He characteristically prefers views that emphasise continuity and harmony between different aspects of faith over those that demand a choice, for example, between faith and culture, scripture and tradition, God’s work and human work, faith and history, and so on. Although the ‘either … or’ approach may make for more dramatic and polemical reading, the ‘both … and’ approach offers a more comprehensive view.

In treating of the inspiration of the Bible, O’Collins shows himself able to accommodate the diversity and complexity that troubled the classroom image of inspiration.

He treats such factors as the multiple contributors and complex historical process involved in many scriptural documents, the consequent difficulty of speaking of an author’s intention, the inclusion of secular material in many texts, the variety of texts that seem to have nothing to say about faith or its living, the apparent ignorance of many inspired writers that they were inspired, and the fact that written Scriptures come relatively late in the earliest church.

They do not create faith but emerge out of a living faith in Christ.

Although he emphasises the involvement of the church community in the process of God’s revelation through the Scriptures, O’Collins insists that each of the Scriptural writers was inspired in what was written. This leads him to suggest tentatively grades of inspiration corresponding both to the greater or lesser place that the writing has in the faith of the church and that the contributor had in the composition of the final document. That is a reasonable suggestion.

I wonder, however, whether a stronger emphasis on the church community as the focus of inspiration might enrich discussion of this issue. The making of icons provides a useful parallel. That process is conducted in prayer, and its aim is not to innovate but to reproduce for the church community the inherited image of Christ and the saints.

The makers of icons are anonymous. They are inspired by faith, their craft is shared and their skill is at the service of the church community. If we think of the making of icons as inspired by the Holy Spirit, we would properly locate the inspiration, not in the individual artist but in the network of relationships that links the icon makers to history, to faith, to liturgy to their fellow artists and to the members of the community. It is part of the enactment of the Body of Christ.

Might that analogy illuminate some aspects of scriptural writings that are attributed to individual writers? The instinct of craftspersons who serve their communities is to remain anonymous. To the messengers only the message matters, particularly those following Christ who took the form of a slave. If they or others attribute their work to the earliest followers of Christ honoured in their community, it would not be an act of self-assertion but of self-concealment as representatives of that community.

As O’Collins says, no neat account of inspiration meets the diversity of the documents that compose the Scriptures. But to locate inspiration primarily in the Christian community and only secondarily in individual writers and contributors does have something to commend it.

The great merit of O’Collins’ comprehensive treatment of biblical inspiration is that it offers a firm base for raising further questions such as these, and for modelling their exploration. We are in his debt.