Two new members of the Society of Jesus made their first vows at Canisius in Sydney on Saturday 3 February 2018.

On 3 February, two Jesuit novices of the Australian province – Matthew Pinson and Isaac Demase – made their simple perpetual vows at St Peter Canisius house in Pymble, in the north of Sydney, supported by their friends, family and other Jesuits from Sydney, Melbourne, Myanmar, and Cambodia. 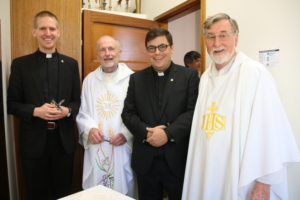 In his homily, Fr Dinh Trung Hoa SJ reflected on the Feast of the Presentation as a ‘feast of letting go.’ He invited Matthew’s and Isaac’s families to reflect on the vow ceremony as a way of letting their sons go into the mission that God will entrust to them.

‘We, as families and friends of Isaac and Matthew, as Jesuits, religious and lay companions, celebrate with them the faith journeys that have brought them here to this important moment. We give praise and thanks to God for the goodness God has shown to them, and entrust them to God’s care for the journey ahead.’

Matthew, from Cowra in New South Wales, previously trained in science, earning a PhD in Physics from Massachusetts Institute of Technology in Cambridge, USA. He also spent some time doing post-doctoral work at James Franck Institute in Chicago, just before entering religious life.

Isaac was born in Maryborough, Queensland, and grew up in Lemnos in Victoria. He lived both at St Mary’s and Newman College in Melbourne as a university student. He trained as a school teacher and worked at the FCJ College in Benalla, Victoria before joining the Jesuits.

Matthew Pinson SJ (32 years old) and Isaac Demase SJ (29 years old) have moved to Melbourne from Western Sydney to begin their training in philosophy and theology.