The scourging of the marginalised

A typical Australian formulation of the urge to justice is ‘the fair go’. The Scourging at the Pillar, by contrast, reminds us of how often the system is stacked against the voiceless and the powerless. By Fr Justin Glyn SJ

Over the Lenten season, Jesuit Communications is running a series of weekly reflections on the Sorrowful Mysteries, titled ‘Season of Consolation’. The reflections are available online, as well as in PDF form so they can be printed off and used in parishes and staffroom reflections. Click here to find them.

In the second reflection of the series, Fr Justin Glyn SJ reflects on the Scourging at the Pillar, wondering how we respond to the pain and suffering we see in the world today.

As I walked out through the gates of Maribyrnong Immigration Detention Centre, I felt a sense of hope.

Visiting had been made harder and harder (it is now virtually impossible). I had been to see Mahmoud (not his real name), a man who had fled persecution in his Middle Eastern homeland. He had a family in Melbourne and had managed to secure the services of a migration agent to progress his family’s refugee claims, which the government had refused to process. 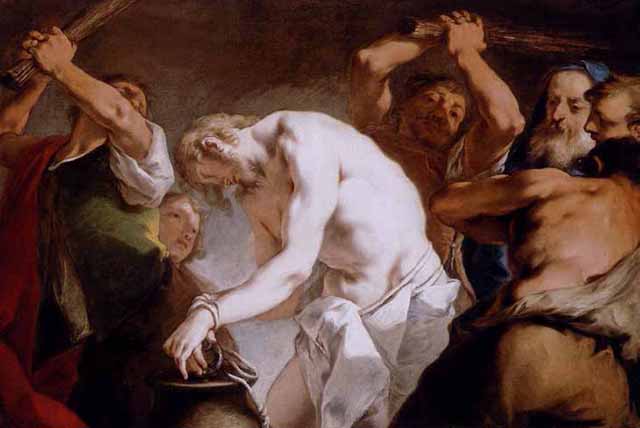 He was looking for character evidence and people had testified to how kind a man he was and how his family (including children with complex needs) were suffering under the strain of separation from a husband and father. Light seemed on the horizon as it seemed that finally there would be a chance to put his case.

Within a week, however, hopes were dashed. The following Friday, I discovered that, in one of the 3am removals which are a hallmark of the immigration authorities, Mahmoud had been taken from his bed and sent to Christmas Island, where communication with his agent was difficult and with family almost impossible.

As a lawyer and priest, I have always thought the justice of God to be more than a figure of speech. The idea that we somehow share in the work of God when we redress wrongs to give people what they need and what they are owed is powerful.

A typical Australian formulation of the urge to justice is ‘the fair go’. The Scourging at the Pillar, by contrast, reminds us of how often (as in Mahmoud’s case) the system is stacked against the voiceless and the powerless.

As with Pilate’s decision to scourge a man he knew to be innocent — and finally to send him to the Cross — justice often takes second place to political expedience.

It may have been the voice of the mob which swayed Pilate (as Mark suggests) or the fear of being denounced to Rome by local authorities frightened of a perceived threat to their power (as John proposes). Either way, such considerations were hardly unique to Roman governors.

Justice and law can, too often, be handy fictions used by the powerful to cover preying upon the weakest and most vulnerable. The abuse scandal in the Church reminds us that it is not only secular authorities who abuse the faith entrusted in them by society but that power of any kind carries the temptation to evil.

So what consolation lies here? Many will say ‘not much’, especially if, like many First Peoples, refugees or other marginalised groups, they are familiar with injustice at first hand.

Perhaps, however, we can reflect on how, just as we are called to share in God’s justice, God has already shared the human experience of injustice: shared it and — in Christ’s death and resurrection — overcome it.

The loving solidarity of Christ has overcome the torture chamber and the show trial. If we are serious about being his followers, though, how do we respond when we see him scourged in those around us?

Sign up for the Daily Prayer e-newsletter to receive more weekly reflections throughout Lent.