'The retreat house on wheels': The Universal Apostolic Preferences at work in Aotearoa, New Zealand

Way back in 1990 when I worked as an assistant priest in the Norwood Parish, I felt the stirrings of a passionate desire to offer an adapted form of The Spiritual Exercises to parishioners in our Jesuit parishes.  Circumstances meant that it was not until 2004, when I was given the opportunity to begin the Master’s Programme in Christian Spirituality at Creighton University in Omaha, that the implementation of this desire began to take shape.  In 2006 I began a spirituality ministry in the Sandhurst Diocese at the invitation of Bishop Joseph Grech to “teach my people to pray with Scripture”.  Offering parishioners Prayer Days and the three-week long directed retreat that I called the Retreat in Everyday Life – based on Annotation 18 of the Spiritual Exercises – I became known as the bishop’s Retreat House on Wheels.  In 2013 this peripatetic ministry moved to the Maitland-Newcastle Diocese where it continued for five years, including the Jubilee Year of Mercy when in a motorhome I traversed the diocese as a Papal Missionary of Mercy engaged in what Pope Francis calls the apostolate of the ear.

In 2017, Steve Lowe, the Bishop of Hamilton in Aotearoa New Zealand, wrote to Provincial Brian McCoy inquiring if there might be a Jesuit available to meet the spirituality needs of his parishioners, deacon and priests.  I was asked by Brian to visit the diocese and to suggest what our Province might be able to offer.  During the early months of 2018, Bishop Lowe accepted the proposal that resulted from my visit and in June, following the priestly ordination of Rob Morris SJ in Christchurch, I began a five-year commitment to the Hamilton Diocese – an area covering the middle of the North Island from the West to the East coast.

Until the onslaught of Covid-19, I would usually spend six or seven weeks following this pattern of ministry: offering Spiritual Direction to permanent deacons and priests and a growing number of parishioners; a four-day Silent Ignatian Directed Retreat at the Tyburn Sisters cloistered convent near Rotorua; and the individually directed Retreat in Everyday Life to a maximum of eighteen participants in one of the parishes.  Sometimes I would offer a Prayer Day to particular groups – e.g., Directors of Religious Education in the primary schools; the staff of the Diocesan Centre; the deacons and their wives.  During Advent, with its atmosphere of end-of-year busyness, parishioners appreciated the opportunity to pause and participate in the week-long Advent Retreat talks.

This year during Lent, one parish priest asked me to offer his communities some ways of praying with the Psalms as a way of marking these weeks.  Calling these sessions: Befriending the Psalms—Praying the Psalms during Lent, I noticed how quickly the parishioners came to see familiar passages in a new light.  A few weeks ago, I trialled a new prayer experience for primary school teachers that I called a Directed Retreat in the Teaching Space.  Following a preparation session on the Monday, the retreat continued for the next four days with each participant meeting me twice during school hours.  So passionate was the principal for this opportunity that she employed a relief teacher to enable the participants to meet me and have some time for their praying.  The retreat concluded on the Friday after school with a group reflection on the experience,during which I noticed how much the teachers relished this opportunity to deepen their praying and discovered how that experience could be taken into the classroom.

Over three years, this mission has been able to reach out to half of the thirty-two principal parish communities in the diocese.  One hundred and sixty-five parishioners have taken up the opportunity to make the Retreat in Everyday Life; one hundred and eighty-five parishioners have followed the Advent Retreat; forty-four people have made the Silent Ignatian Directed Retreat and ten permanent deacons, six priests and six parishioners regularly receive Spiritual Direction.  Others have followed the sessions I have offered on Discernment – How do I Make a Wise Decision with the Help of Ignatius’ Rules for the Discernment of Spirits in Everyday Life – either in person or online and many in the diocese and beyond followed the online Holy Week Retreat during New Zealand’s National Lockdown in 2020. 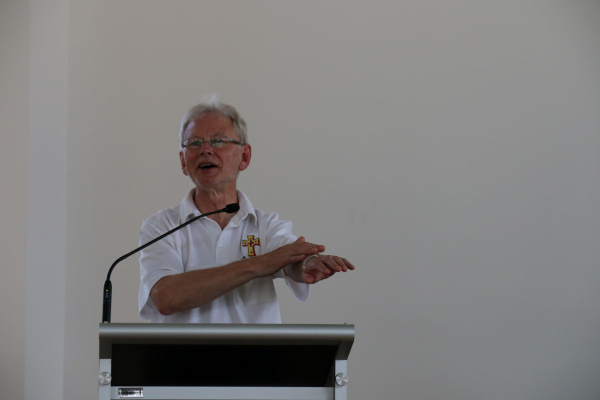 This Jesuit Province mission to the Hamilton Diocese follows a simple and manageable model.  In order to carry out this ministry I need only the following: a welcoming bishop with a passion for meeting the spiritual needs of his diocese; someone to plan and oversee what I do (the Pastoral Services Manager of the diocese); a car and petrol card; appropriate venues for my work; and priests who are willing to welcome me into their presbyteries and offer me sustenance.  All these have been provided within the means of a modestly funded rural diocese.

Last year a request came to the Provincial asking if there might be a Jesuit available to assist members of the ICPE (Institute for World Evangelisation) lay community based in Wellington.  The Maltese founders of this community have strong Ignatian and Jesuit links.  Because the borders on either side of the Tasman Sea were closed to travel for most of 2020, I was able to spend time with these people, offering a directed retreat and help with deepening their understanding of Ignatian discernment.  They are currently considering the future direction of their ministry in Aotearoa New Zealand.  Having first encountered this community in 2006, I was very happy to befriend it anew.

While the past fifteen months have proved very demanding – at times I felt incarcerated on the other side of the Tasman Sea – there have been some wonderfully graced moments as well.  I have been able to carry out the first of the Universal Apostolic Preferences – showing the way to God – on behalf of the Province in Aotearoa New Zealand in a richly grace-filled way.  Also, this ‘missionary’ ministry touches on aspects of the second UAP (walking with the excluded) in light of the simplicity of this work and its Papal Missionary of Mercy flavour that is so dear to my heart.  Thanks to the generosity of the Trinity, I have been given a deep peace,knowing that this is where the Trinity wants me to be and to serve the Church, together with unexpected instances of wonderful family encounters.  I am as healthy as can be expected at my age and I am fortunate to be the recipient of much love and care from whanau (family), friends and the local priests.

What more could I ask for?