The Feast of St Ignatius: God in all things

Ignatian spirituality is — by virtue of God’s stamp of ‘goodness’ on the world at the point of creation, and through the Incarnation, where God took flesh to embrace the world — world-affirming. As the painter Holly Schapker depicts it, Ignatius is clothed in God’s world. By Fr Ross Jones SJ

Holly Schapker is a graduate from Jesuit Xavier University in Cincinnati. Some years ago, she completed a series of paintings on the life of Ignatius Loyola. 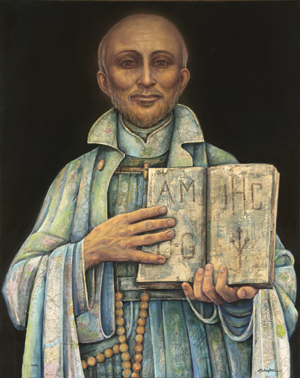 Ignatius: 40×60 oil and maps on canvas, by Holly Schapker. Reproduced with permission of the artist.

Ignatius, as captured by her, has many intriguing features. He is smiling, unusual for the rather serious man we imagine him to have been. He is garbed in blue, a change from the customary black. And, if you look closely, his soutane is actually a map.

That last feature has many levels of interpretation. In his autobiography, Ignatius styled himself ‘the Pilgrim’. He was on the road, searching for a destination in both the literal and spiritual sense. Later, in describing Jesuit mission, Ignatius told his companions, ‘the world is our home’. That is, there were no frontiers to which we would not venture on mission.

Finally, Ignatian spirituality is — by virtue of God’s stamp of ‘goodness’ on the world at the point of creation, and through the Incarnation, where God took flesh to embrace the world — world-affirming. As Schapker depicts it, Ignatius is clothed in God’s world.

Many images of Ignatius traditionally have him holding a book, usually his Constitutions or the Spiritual Exercises. Here the book displays the two logos most commonly associated with the Jesuits: AMDG and IHS.

The latter is the ubiquitous abbreviation of the name of Jesus in Greek – long-standing in Church iconography, well before Ignatius’ time. Jesus was always the heart and focus of Ignatius’ spirituality. His new band of brothers styled themselves ‘the Companions of Jesus’. But that AMDG always seems to me to need a little ‘unpacking’, as they say.

The origin of the phrase, ad maiorem Dei gloriam (AMDG), is attributed to Ignatius and adopted by him as the motto of the Society of Jesus. Translated, it is ‘for the greater glory of God’. Those with an insight into Ignatius’ style would already see a suggestion of the magis in this. All things are undertaken for the greater glory of God. Nothing less is appropriate.

But straightaway, the motto turns one’s thoughts to the question, how can we give any glory at all to God? God is God — all glory. Perhaps a clue comes from that well-known saying of second-century St Irenaeus of Lyons, who once penned: ‘the glory of God is the human person fully alive’. The suggestion here is that by living life to the full God is honoured, thanked for all that we are gifted with, and thereby is glorified.

In the Ignatian worldview, we find God in all things. Therefore all the things we undertake (unless of course they are evil) are sources of this glory-giving.

And this is not confined to things spiritual, like prayers, hymns, liturgies, sacraments or spiritual reading. Extending, expressing and experiencing all of one’s talents and gifts to the full are starting points. It is as Jesuit poet Gerard Manley Hopkins wrote in the 19th century:

‘You do say grace at meals and thank and praise God for your daily bread, so far so good, but give thanks and praise him now for everything …

‘It is not only prayer that gives God glory, but work. Smiting on an anvil, sawing a beam, whitewashing a wall, driving horses, sweeping, scouring, everything gives God some glory if being in his grace you do it as your duty.

‘He is so great that all things give him glory if you mean they should. So then, my brethren, live.’

There is an intentionality suggested here in ‘if you mean they should’. A deliberate orientation or attitude. Just as the old morning offering prayer used to begin: ‘I offer you my prayers, works, joys and sufferings of this day.’ All things. All directed.

Such glory-giving is just as Jesus prayed to his Father during the Last Supper discourse, as his life was drawing to a finality: ‘I glorified you on earth by accomplishing the work that you gave me to do.’ (John 17:4)