Mass at St Ignatius' Church in Richmond, Vic., commences a year of celebrations.

Jesuit Social Services has kicked off its 40 year celebrations with an anniversary Mass at St Ignatius Church, Richmond. 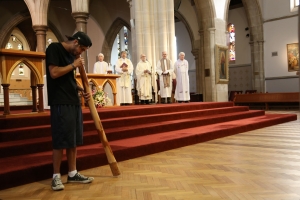 Didgeridoo performance by Brent Watkins during the Mass

In his homily, Fr McCoy said: ‘From humble beginnings with eight young adults in Four Flats in 1977 to those many thousands who have been involved since then as staff, board members, participants, volunteers, friends and companions, we have good reason to pause and give thanks for many things, particularly those gifts of mercy offered, shared and received.’

Fr McCoy also spoke to the mercy that underpins Jesuit Social Services’ work and reminded attendees that each of us is ‘more than the worst thing we’ve ever done’. The homily is available in full on the here.

At the beginning of the Mass, symbols that represent Jesuit Social Services’ values were presented and placed in front of the altar. These included tea cups to represent relationship and hospitality (welcoming), a candle to represent a reflective nature (discerning), and an image of fire to represent the fire in the belly that compels us to go where the need is greatest (courageous).