Tackling poverty is a long, hard but necessary task

It is easy to say that the poor are always with us. No doubt we shall never eradicate poverty totally. But poverty is neither natural, necessary nor inevitable, writes Fr Andrew Hamilton SJ.

We usually think of poverty as something that afflicts third world nations. But it is also present in Australia — shamefully so, in a nation of great wealth. 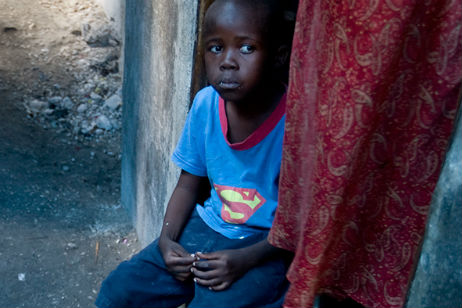 A boy sits outside his house in Cite L’Eternel, a poor neighborhood of Port au Prince, Haiti. UN Photo/Marco Dormino

We can see its effects in the lives of Indigenous Australians, with their poorer life expectancy outcome and educational opportunities, and greater likelihood of addiction, hospitalisation and jailing.

We see it also in the lives of homeless people, whether visible or forced to remain invisible in our cities, in the poor who can remain on benefits, and in the low level of benefits that make it impossible to live with decency.

At Jesuit Social Services we see the effects of poverty in the lives of vulnerable young people, often from dysfunctional families, lacking appropriate child care, support to take advantage of education and to find work, liable to physical and mental illness, lacking the social skills to connect with society and shamed by the conditions placed on the inadequate benefits open to them.

It is easy to say that the poor are always with us and to claim that we cannot eradicate poverty. No doubt we shall never eradicate poverty totally, but poverty is neither natural, necessary nor inevitable.

It is someone’s fault — the result of conscious decisions taken by human beings that result in some people increasing their already extreme wealth and in making other people vulnerable and excluded.

Poverty grows when we attribute to our economic framework a sacred power and privilege economic growth over the welfare of people who are poor. It will be eradicated when we all see people as more important than an economic system designed for inequality.

Dealing with poverty demands that good people who are not poor take pains to notice it and accept the responsibility of addressing it. Pope Francis calls this process conversion. We are invited to see the world and the people in it through Christ’s eyes and with Christ’s heart.

When we do this we notice what poverty does to people: the anxiety, the bad diet and problems with hygiene, the mental and physical ill-health, the lack of mobility to find jobs.

We also see the inequality that exists alongside poverty and the ways in which people fight to defend the advantages that allow them to amass wealth. We see the ways that governments blame people for their poverty and humiliate them when they claim their inadequate benefits.

To make the world more just is a long and hard task. We can be discouraged when we see how tiny is our power to change things. The International Day for the Eradication of Poverty encourages us to think and to speak about the causes of poverty.

It is also important to light candles rather than curse the darkness. We might stop to chat with a homeless person instead of passing by, spend some of our time with the local Vinnies, or devote an evening to the soup van.

These are small things. But they say to the people whom we meet that they matter. And because they matter we become a little more committed to eradicating poverty.

17 October is the International Day for the Eradication of Poverty