Colombia-born Carolina Gottardo is well aware of the political hot potato that is refugee policy in Australia, having served here ten years ago as National Policy Director for the Refugee Council. And she brings an impressive swathe of credentials to her role as Country Director of Jesuit Refugee Service Australia, following 20-plus years working in human rights organisations around the globe. 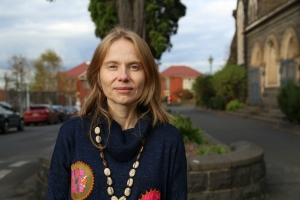 Still, there was one question that was troubling her, as she underwent a job interview with Provincial Fr Brian McCoy SJ over Skype from London. ‘I asked, “How do you feel about the fact that this organisation has always been led by a Jesuit priest, and I’m not a priest?” He answered, “We feel blessed working with laypeople. It’s working together that will make us strong as an organisation.”

‘I see it the same way. It is important that we embed the Jesuit values in all the work we do, and to me that’s about focusing on those most in need, the poorest, the most marginalised. It doesn’t matter if you’re Jesuit or lay, as long as you can take those values forward and your primary interest is to ensure refugees and asylum seekers are treated with the dignity and respect they deserve.’

Carolina began at JRS in March, following her most recent role as Director of the Latin American Women’s Rights Service in the UK. Previously she worked for the UN Development Program, the UK’s Catholic Agency for Overseas Development, the British Institute of Human Rights, and the British Red Cross. She holds degrees in law and economics, and international development management.

‘I’ve been working with human rights for a long time — since 1996’, Carolina says. ‘And I have done this work in different countries, and across different contexts. So I bring a global perspective to the table, as well as a lot of management and leadership experience, and knowledge about the specific issues related to refugees, migration and asylum.’

Perhaps more important still, though, is her passion for the people with whom JRS works. ‘I really care about the rights of refugees and asylum seekers, of people who are most excluded, whom nobody cares about. I have dedicated my life to pursuing this work. This is an opportunity to continue in that, and with JRS to try to achieve some change for the lives of refugees and asylum seekers.’

Australia is, she points out, a world leader in terms of its refugee resettlement program but, more dubiously, is also a world leader in terms of its punitive treatment of asylum seekers who arrive on-shore. It is the latter group, ‘the most excluded’, that JRS Australia is typically concerned with, and Carolina believes that to best serve them JRS needs to be more than simply a service provider.

‘You don’t produce changes by only providing services, because that only achieves part of the solution’, she says. ‘It’s by doing policy and advocacy work that you achieve something broader, by trying to change the systemic issues. It’s bringing those two points together. JRS is in a good position to do this because it has already identified that the work needs to be done at both levels.’

Another priority for JRS under Carolina’s stewardship ‘is to continue working in close partnership with our regional and international counterparts. The beauty of an organisation like JRS is that we are in almost 50 countries and we really could inform asylum policy not only at national but also regional and global levels. That places us in a unique position as an organisation.’

With this global perspective comes a need to recognise the diverse needs of particular groups, and respond accordingly. Carolina specifies the ‘multiple discrimination’ experienced by women and girls seeking asylum. This has been an area of specialisation over the years for Carolina, who elaborates that women and girls encounter specific challenges that their male counterparts do not.

‘They are both in very difficult circumstances but women have compounding circumstances.’ For example, many women who have experienced domestic and gender-based violence prior to coming to Australia, find they remain vulnerable to it once they arrive, due to the powerlessness of their situation. ‘We need to be able to respond by having very specific support for women and girls at risk.’

The same is true for unaccompanied minors or any other group with a specific set of needs; the point is that there’s no one-size-fits-all solution. ‘It means developing different programs depending on which groups we are working with. So I am exploring that. We are here to serve all asylum seekers, but we need to respond specifically to groups that are facing different challenges.’