Australian Jesuit Fr Edward Sydes was one of only two First World War Australian Army chaplains to die as a result of casualties in action. As we mark the centenary of the Armistice on 11 November, we remember the life of a Jesuit who saw the end of the war, but died just a few days later.

Edward Sydes was born off the coast of Australia in the British ship Norman Morrison on which his parents were passengers from Ireland to Queensland. His father was a carpenter and he was the seventh in a family of eight. He attended the Catholic primary schools at Ipswich and Brisbane and also a state school for 12 months.

He also won a Queensland Government University Exhibition that was worth £100 per year for three years, which entitled him to attend any university in the Empire.

He decided to attend the University of Melbourne and completed a BA, MA and LLB. The MA degree with second-class honours was taken in 1890 at the school of history, political economy and jurisprudence. In 1886 he won a scholarship for Ormond College, and later won the Oratory Prize. 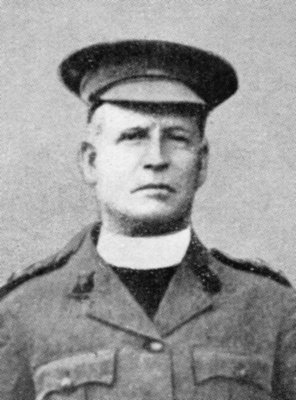 In 1891 he was called to the Bar in Melbourne and a month later to the Queensland Bar where he practised until 17 August 1903. He taught honours history and mathematics at Xavier College while reading for the Bar.

As a youth he was remembered as energetic, social and popular, and devoted to the Catholic faith, reading The Imitation of Christ daily. He was a successful barrister for 12 years, winning public acclaim for his work. He was invited to enter politics, but failed selection for the Queensland parliament twice.

He was one of the leaders of the Anti-Federation Party in Queensland in 1900 and addressed many meetings in Brisbane and other towns in the south.

His faith led him to involvement with the Catholic Young Men’s Society, the Holy Cross Guild and the St Vincent de Paul Conferences. However, surprise was noted among those who knew him when at the age of 40 he decided to enter the Society of Jesus on 7 November 1903, being impressed with the way the Society worked for the missions and the poor. He also desired to work among Protestants.

He was sent to Tullamore, Ireland, for his noviciate under Michael Browne. Further studies were made at Louvain and Milltown Park and he was ordained in 1909.

Soon after, however, at the age of 53, he was appointed a chaplain of the Australian Imperial Forces in 1917. He served with the Second Division Artillery during 1918, and earned a good name for himself because of his devoted service to the wounded and needy.

Unfortunately, he was gassed by some of his own men during the engagements at Le Cateau. From this time he developed a thrombosis in his leg, and was invalided to England in November 1918 and conveyed to Wandsworth Military Hospital.

Pneumonia set in and he died soon after. He and the Irish Jesuit Michael Bergin, who served with the AIF but never visited Australia, are the only two Australian Army chaplains who died as a result of casualties in action.

The life of Edward Sydes as a Jesuit was short and different from most Australian Jesuits, but his uniqueness bears witness to the variety of Jesuit ministries, and the mystery of God’s calling. He was buried in a Commonwealth War Graves Commission grave in a Catholic cemetery in Hammersmith, London.

He had qualified for the British War Medal, 1914-18, and the Interallied Victory Medal, which were claimed by his sister, Mary Sydes, on 9 January 1923.

This account was taken from The Australian Dictionary of Jesuit Biography 1848-2015, edited by Fr David Strong SJ. Copies of the book are available for purchase here.

‘The time I was most associated with him was when we were both away from our brigade at the main dressing-station … The troops came back from the line in great numbers, American, Australians and Germans, and it was not long before the dressing-station was tragically overcrowded. To make things worse many were left outside in the cold drizzling rain.

‘Well, your brother was in and out of that hospital (situated in a rough set of buildings) late and early, serving his Master and his comrades with very gracious fidelity in every way open to him. His knowledge of German was a great help, and enabled him to be of use to the suffering enemy, and he took full advantage of the opportunity open to him … I can fully testify to the singular beauty of his service.

‘A most cultivated man, a distinguished minister of his Church, a man quite out of the common, was there in the disorder and distress and agony of the time, mingling with his direct spiritual counsel the very lowly service of handing out cocoa and cigarettes, helping here and there and lending a hand in any way he could; but surely all was invested with the true and essential dignity of his calling.’

Another account (also published by Fr O’Neill) is from Lieutenant John, who knew Sydes from both Sydney and the battlefield and wrote a letter to his sister.

‘The first time I saw Fr Sydes he was on the altar at North Sydney, just before I left to go over the other side … His great sermon revealed to me — a stranger — his strong fearless and unusual personality.

‘Little did I think then that I in later days should be honoured with his interest and friendship in close association in the field in France and Belgium. I say close association, for that was the feeling every man, whatever his rank, in the Div Artillery had when the Padre was around …’

(From later in the letter): ‘Every day he made his pilgrimage to the front line and God knows what his presence meant there to the boys. He never spared himself, and in the midst of all his work he found time on occasion to drop into the dugout that I shared with another gunner — a young Anglican divinity student — for a yarn …

‘Religion was not talked but he opened up in his charming manner many new furrows of thought that one has ploughed more or less haltingly since.

‘I count those hours in association with one so intellectually gifted, especially after one had been living long years of an isolated bush life rather starved mentally, as among the most valuable and happy hours I have ever spent.’