The Rector of St Aloysius’ College, Milsons Point, Fr Ross Jones SJ recently addressed students at a College Leadership Assembly highlighting that the appointment of leadership is not a reward for achievement, but an invitation to a deeper commitment to the care of others.

I was surprised to read what the current worldwide General of the Jesuits, Fr Arturo Sosa, wrote about Jesuit education. He named its defining feature. What do think it was? Academic excellence? Forming strong Catholic faith? Shaping ‘Men and Women for Others?’ Cultivating written or spoken eloquence? No – none of these. He suggested that from the days of our first schools to the present, the defining feature of Jesuit education is cura personalis. The care of the individual. The person. How we look after each other. That’s a big call by Fr Sosa. The defining characteristic, he says.

So, on an occasion like this, it makes us think of this quality and our leadership style at Aloys.

You know our present Pope is keen on using the image of the shepherd when he talks about leadership. Not like the proverbial Pitt Street farmer, who might own tens of thousands of sheep in the faraway west, who has managers to mind them, who occasionally views them through the tinted windows of an air-conditioned Land Cruiser, but who wouldn’t really know a sheep dagging from a drenching. No. Francis is talking about a middle-eastern shepherd who lives with his little mob night and day, guarding and guiding them. A shepherd who, as the Pope said, “lives with the smell of his sheep” on him. Francis went on to say:

“This is why being Shepherds also means being ready to walk amidst the flock: capable of hearing the silent story of those who suffer, and of sustaining the steps of those who are afraid of not making it; careful to lift up, to reassure, and to inspire hope.” 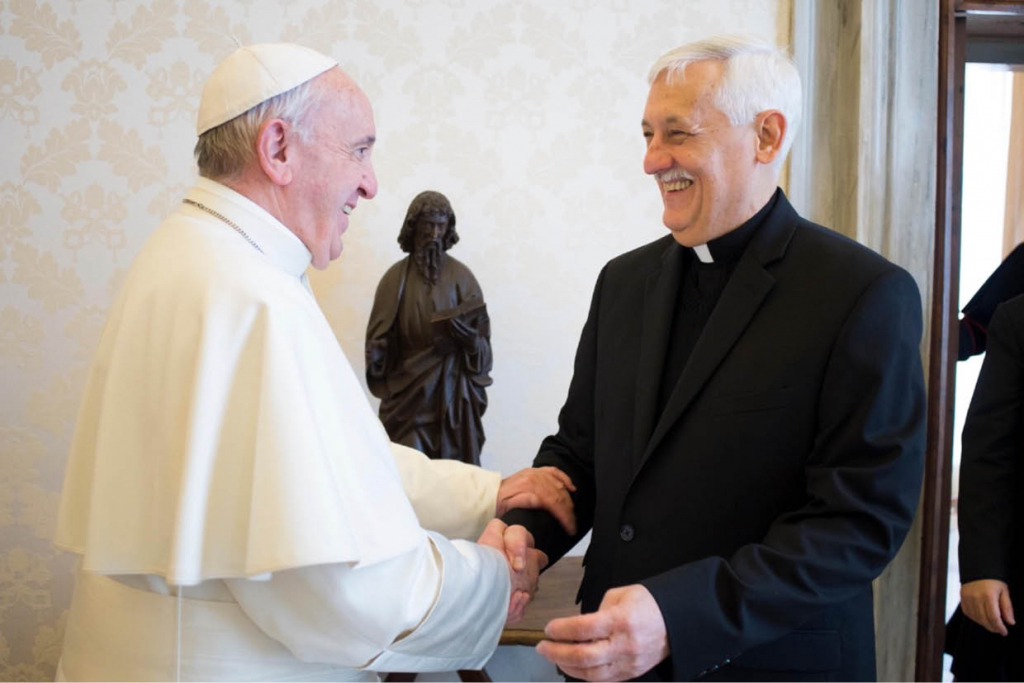 This is the leadership to which he is calling us all. It is having the common touch. Francis made his first overseas trip only a few months after he was elected Pope. Where was it? Where did he choose to go? Not to a western nation on a State visit. Not for a cavalcade parade down capital city streets lined with cheering faithful followers. Not to grand dinners with the movers and shakers, the power people. None of those. It was to the little island of Lampedusa, south of Italy, where thousands of boat people who had fled the poverty and conflict of north Africa were living – or trying to find life. He said there, “We have lost our sense of brotherly responsibility. We have forgotten how to cry for migrants lost at sea.” So that’s where he came.

How did the people respond? If you saw news footage, you could see it in their faces. The faces of many who were not even Catholic or Christian. There was a sign hanging on a wall that said it all – “You are one of us.”

Four years after that, another world leader assumed office: Donald Trump. At the lunch on his inauguration day, the chaplain to the Senate, Reverend Barry Black, said grace. He was the first African American to hold that office. This was his prayer for the President:

[May he] lead with God’s strength which reaches out to those on life’s margins – the lost, lonely, last, least and left out. May he remember that those who would leave a legacy of greatness must strive to become servants of all.

Such care for others begins with humility. Alert to others’ needs because you stand shoulder-to-shoulder with them. Every year, when we explore leadership with the Prefects-elect, they are drawn to a remark I share with them. It is by the Nobel Prize-winning Colombian author, Gabriel García Márquez. He once wrote:

I have learned that a man has the right to look down on another only when he has to help the other get to his feet.

You see, we rise by lifting others up.

Cura personalis is the defining quality of a Jesuit school, said Fr Sosa. So, whether you are captain of a team, of a House or of the school, or chair of a club or society, or leader of an ensemble, or a prefect – live out that claim of Fr Sosa.

Live out what has defined us for nearly five centuries. And believe that your leadership of others has influence when they know that you care.