Stories of the Sacraments told with humour and grace

The new book by Fr Richard Leonard SJ eschews the easy answers of religious fundamentalism and scuttles some of the Church’s legalism and control over what should be seven happy chapters and events of celebration in people’s religious journeys, writes Fr Chris Gleeson SJ

This is the full speech given by Fr Christopher Gleeson SJ at the Melbourne launch of Hatch, Match & Dispatch: A Catholic Guide to Sacraments, by Fr Richard Leonard SJ.

I am delighted to be asked to launch Richard’s latest tome Hatch, Match, and Dispatch — not a ‘flippant or glib’ title, as he claims, for this journey with him through the seven Sacraments.

Living next door to him for three years in the Lavender Bay presbytery, I have some knowledge of the discipline and generosity he gives to his writing while other Community members like yours truly found comfort in turning off their minds in front of the television.

Looking back on my own four years of theology study in the wonderful Jesuit Theological College community during the 1970s, I can’t remember much about the subject ‘sacramental theology’. We were given more teaching on how to administer the sacraments rather than look at the rich stories underlying each sacrament that Richard provides for us in what he hopes is ‘an engaging primer’. 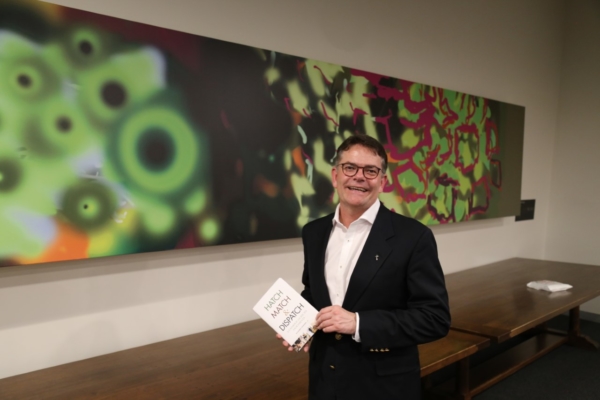 Fr Richard Leonard SJ is all smiles at the Melbourne launch of Hatch, Match, and Dispatch.

While he has not written the book, as he says, ‘for the Academy’, it will be nonetheless a very useful book for all students of theology and those interested in learning more about their Catholic faith informally. One could envision faith formation groups in parishes, for example, discovering great interest in their conversations about the various very accessible chapters.

Those who have read any of Richard’s previous books, or heard him present at conferences, would know that he is a master storyteller. In Hatch, Match, and Dispatch he uses story skilfully, both to illustrate an important theological point and also to engage us in his own personal experience.

Richard understands very well also that humour is a powerful tool for spreading the Gospel; indeed, so many of his stories are laced with words that make us laugh.

As one example, illustrating the Sacrament of Penance, Richard tells the story of a new, city-based Bishop appointed to a diocese in the outback of Australia — famous for its huge sheep ranches. Likening himself to the Good Shepherd who cares for every one of his sheep, the Bishop became excited and asked the students: ‘What would your father do if he lost one of his sheep?’

The class was silent, so the Bishop addressed his question to one of the boys. ‘Michael, what would your dad do if he lost one of his sheep?’ To which the young man replied: ‘Well, Bishop, seeing Dad’s got 42 thousand of them, he’d let the bastard go.’

Not surprisingly, Richard, who has a Doctorate in film studies and last year was a member of the elite jury of film reviewers at Cannes, weaves his knowledge of film through the book to give us another lens on the meaning of the various sacraments. So we get snatches of the following films:

It is also important to stress that Richard does not shy away from treating some of the neuralgic pastoral issues in this book. For example:

Finally, about the time I started reading this book to review it, that wise young Jesuit scholastic, Isaac Demase, sent around the Province the unsurprisingly gloomy results of the recent ABC survey of religion. I say ‘unsurprising’ because the ABC is no friend of religious coverage and has scuttled its department accordingly in recent times.

From the rather large sample of 54,000 respondents to the survey, these were some of the findings:

It had me asking the question: How does Richard’s Hatch, Match, and Dispatch address the challenges thrown to us by this survey?

In stark contrast to the ABC survey was a more recent internal report by Jesuit scholastic, Julian Butler, who attended the Australian Catholic Youth Festival in Perth in early December and found the 5000 young people gathered there enjoying ‘an incredible experience of faith and hope’. Richard’s book would certainly appeal to these young people — the future of our Church — who clearly have a love and a hunger for learning more about their faith. 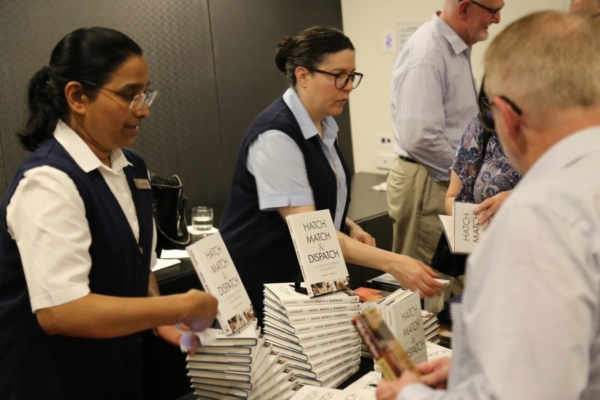 Book sellers in action at the Melbourne launch of Hatch, Match, and Dispatch.

American writer Kathleen Norris, in her book Amazing Grace, reminds us that Christianity ‘is at its worst when it becomes defensive. Often, enshrining orthodoxy into words has caused more trouble, more pain, more evil in the world than it was worth.’

In 2011, visiting Israeli writer Amos Oz said that fanaticism is ‘the most urgent issue of our times’. Religious fanaticism, which reveals itself in the easy black and white answers of religious fundamentalism is, according to Norris, ‘more about control than grace’.

In contrast, Hatch, Match, and Dispatch is a book full of grace — to lean on some other well-known words from Luke chapter 1!

At the very end of George Bernanos’ classic French novel Diary of a Country Priest, which depicts the corruption and excesses of the Church of the day, the good and honest young curate is dying of painful stomach cancer. His friend, who is with him, has sent for the Priest to administer the last rites and they are waiting for him to arrive. The friend writes:

The priest was still on his way, and finally I was bound to voice my deep regret that such a delay threatened to deprive my comrade of the final consolation of the church…He then uttered these words … And I am quite sure that I have recorded them accurately, for his voice, though halting, was strangely distinct:

‘Does it matter? Grace is everywhere …’

In Hatch, Match, and Dispatch, grace is everywhere as Richard provides the rich story behind the Sacraments, eschewing the easy answers of religious fundamentalism and scuttling some of the Church’s legalism and control over what should be seven happy chapters and events of celebration in people’s religious journeys.

I hope you enjoy the book as much as I did, and discover that ‘all is grace’ — famous theologian Karl Rahner’s last words before he died — as Richard deftly uncovers grace for us, and its first cousin, love, in every aspect of life.