St Ignatius' Feast Day: What are we called to give as disciples?

In a homily for the Feast of St Ignatius, Australian Provincial Fr Brian McCoy reflects on what makes a person a good disciple. ‘The Gospel today is asking us what are you called to give? Sometimes it’s just a little gift of blood. Sometimes it’s your life. But it’s giving out of love for the people who need it most.'

Fr Brian McCoy celebrated Mass for staff at Jesuit Social Services for the Feast of St Ignatius on 31 July, recalling his recent visit to East Timor and how we can sometimes receive unexpected requests for assistance as we follow in Ignatius’ footsteps. 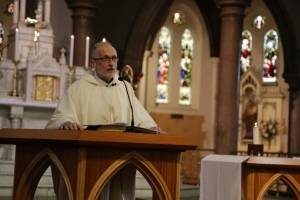 Fr McCoy recently returned from a visit to East Timor, where the Australian Province funds a number of projects in conjunction with the Japanese and Philippines Provinces.

Among the places he visited was the community of Railaco, where the Jesuits support a health clinic, a school and a parish, and where a new hostel to help young female students stay in school is under construction.

‘We were meeting the builder, who was married to a Timorese woman. He says to us, as he’s showing us around the building, “Are any of you A-positive blood? My wife’s having an operation on Thursday for breast cancer, and we need some blood”. Because in East Timor there’s no blood bank – your family has to provide the blood’, Fr McCoy recalled.

The next day, Brian and Mark – along with a sponsor from Germany, Thomas, who arrived that day – went to the hospital to give blood.

‘It was a good reminder of what you’re prepared to give, spontaneously, when you’re being asked, and there’s a need, and there’s no other support’, said Fr McCoy.

‘We were meeting families there who were asking us if we were A-positive too, because they were trying to find people to help their loved ones.

‘The Gospel today is asking us: “What are you called to give”? Sometimes it’s just a little gift of blood. Sometimes it’s your life. But it’s giving out of love for the people who need it most.

‘And that’s what Jesuit Social Services does. It’s what our Province tries to do. It’s humble, it’s weak, it’s human, it’s broken. But we’re all of us trying to be people following the Gospel, to give life to those who most need it, out of the privileges that we have shared and which we have had for so long in this country. 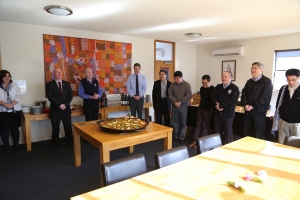 Meanwhile, staff at the Province Office were joined by the tertian group and other special guests for a feast day lunch.

The tertians will be finishing their time in Australia in ten days. Also joining in the celebration were Fr Trung Nguyen from Jesuit Mission, and Ms Carolina Gottardo from Jesuit Refugee Service.

In honour of Ignatius’ Spanish origins, the guests feasted on paella.