St Ignatius College Geelong celebrated its 10th anniversary with a full school assembly on the Feast of St Ignatius. One of the school’s ‘Ignatian Promoters’, Year 11 student Kiera Ford, reports on the events of the day. 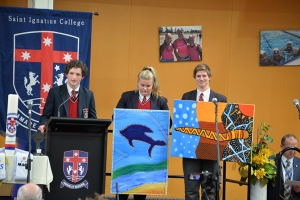 To make up for the weather-cancelled Sorry Day ceremony early in the year, the assembly began with a traditional didgeridoo performance from Wathaurong elder Mr Norm Stanley along with some beautiful words about the importance of family and language. This touching ceremony ended with a prayer for the stolen generations.

Principal Mr Michael Exton addressed the school community. He spoke about the importance of creating our own story. As the Feast Day is a celebration of the story of St Ignatius, we as a community and as individuals should use his story – as well as the school motto this year ‘believe we can be more’ – to challenge ourselves.

Mr Exton encouraged us to develop our conscience, compassion and competence, to live more and learn more, and to develop ourselves to be the people who we really want to be.

Kerry Kingsbury spoke to the school about her recent immersion in East Timor as the school’s representative on the Australian Jesuit Schools Immersion. The immersion involves students from Jesuit and Companion schools across Australia, and takes place each year.

Kerry told us that, while confronting at times, the experience was a transformative two-week experience. She shared how she learnt a lot about our privilege and gained a new appreciation of this through visiting schools and prisons in East Timor.

Our two college captains, Kelsey Notting and Greg Lewis, then addressed the school. 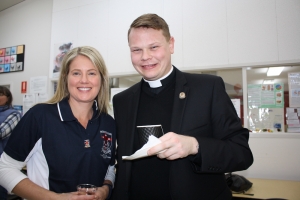 Nick Malone addressed the school about his experience on the recent Minjerrable immersion to North Stradbroke Island for six days. On this immersion students were given the opportunity to learn about Indigenous culture from two different Indigenous community leaders, including learning about connection to the land and hunting and gathering. The students were also given the opportunity to help out at the local primary school that had been recently damaged by a devastating bushfire.

The assembly was concluded by Anglican priest Fr Mathew Crane, a student from the class of 2007, the year the College began. He blessed the school and cut the anniversary cake, and then the school sang its song, ‘We are Companions of Ignatius’.