A splendid contribution to understanding the Australian Province story

Fr David Strong's Dictionary of Jesuit Biography 1848-2015 celebrates the variety, achievements idiosyncrasies and frailties of our brother Jesuits who have worked in Australia. 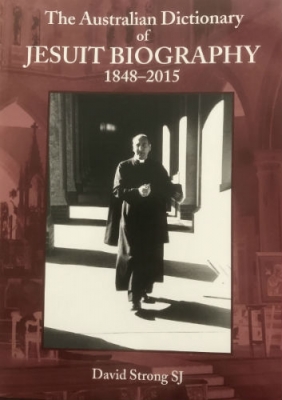 The Dictionary of Jesuit Biography 1848-2015, by Fr David Strong SJ

In this splendidly produced book Fr David Strong SJ has put us in his debt by offering short accounts of the lives of the vast majority of Jesuits who have worked in Australia. It will be an invaluable work of reference for discovering the dates and ministries of Jesuits who have worked in Australia. In its brief entries it gives snapshots of Jesuit history.

The Dictionary expands on the earlier edition by including Jesuits who have died in recent years, and also brief entries provided by Fr Michael Head, SJ of Irish Jesuits who worked only for a brief time in Australia. Its most significant limitation, understandable in such a massive labour of love, is its restriction to men who lived and died as Jesuits. The contributions to the Society of such men as Michael Scott and Peter Kelly who later left it are central for understanding the Australian Province story.

The Dictionary celebrates the variety, achievements idiosyncrasies and frailties of our brother Jesuits who have worked in Australia. The entries on Jesuits who have recently died are understandably fuller than those who died earlier. They draw on more written and oral sources and also inevitably reflect partial judgments and chatty reminiscences. They will provoke lively discussion among readers who will have had different experiences and made different estimations of the Jesuits represented.

The photographs are particularly evocative. From the rows of men in their black gowns and white collars beneath faces made grim by the long exposure times of 19th century photography to a photographs of four archetypal square-jawed Aussie men in a speedboat on Sydney harbour to the striking image of Geoff James in unaccustomed clerical collar and more typically quirky scarlet biretta, the photographs represent a great diversity of times, talents, temperaments and commitments that somehow contribute to a shared enterprise.

I cannot see any solution that will be truthful, respectful and that will win universal approval. We are travelling without compass in the thickly wooded foothills of a climb to a summit where, only when we’ve reached it shall recognise what might have been the best route to take to the goals to which we aspire: to recognise fully the harm done to people sexually abused by Jesuits; to accept our duty to seek pardon and make recompense and protect against its repetition; to abhor the betrayal of faith in such abuse; to acknowledge our failures in communities to know each other well enough to divert our brother Jesuits from the path that led to abuse or to confront the signs that indicated it; and to tell our story in all its shameful as well as in its admirable aspects.

Later we might see a better way. Bush bashing as we now are, the directions taken in the Dictionary at least confront the questions and express a desire to find a route that meets all these demands.

Both the entries and the photographs conceal as much as they reveal. They invite us to muse on the inner world of the Jesuits mentioned and to wonder how far their inner Jesuit-self, formed in different worlds from ours, corresponds to our own.

To take one example of a Jesuit whose ministry is well covered in the Dictionary: Fr John (Sammy) Bourke, then in his eighties, used to visit the Noviceship from time to time.. He delighted us with his florid gestures and melodramatic intonation as he celebrated the Latin Mass. I remember vividly a phrase in the sermon he preached at the death of his contemporary Fr Vin Conlon SJ. Vin’s brother Felix, also a Jesuit, had died 26 years earlier while attempting to rescue a swimmer in trouble. Fr Bourke recalled his death, saying ‘A monster of the deep came up and seized Felix’.

Just as his gestures and intonation took liberties with the rubrics, so his line played creatively with the historical truth. Both reflected a time when the preacher’s unamplified voice had to hit the back wall of a church that held a thousand people or of a hall with five hundred boys. An effective preacher or speaker had to find the colourful and creative rhetoric that was later provided by radio and television.

To us even as novices Fr Bourke seemed to belong to a different age. Now I wonder how his rhetorical style coloured his sense of being a Jesuit — how he prayed, understood the Spiritual Exercises and imagined his world. I am led to wonder, too, how my own rhetorical style formed in a very different world, shapes the way I do these things. The merit of the Dictionary is that, for all its limitations, it leads us to muse on such questions and leaves us pondering mystery.

The Dictionary of Jesuit Biography 1848-2015 will be launched in North Sydney on Thursday 19 October 2017. Click to RSVP.