Speaking up for refugees on Palm Sunday

‘Don’t be discouraged. Our voices need to be heard.’ Palm Sunday rallies across Australia were an opportunity for people to put the plight of asylum seekers on the agenda ahead of the upcoming federal election.

Thousands turned out at events throughout Australia on Palm Sunday, calling on all parties to address justice for refugees as a key campaign issue in the upcoming federal election. 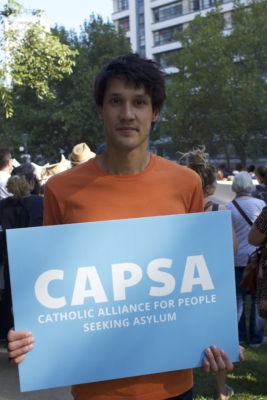 The largest rally was in Melbourne, where thousands gathered at the State Library before walking down Swanston Street.

The Catholic Alliance for People Seeking Asylum (CAPSA) held a prayer and reflection gathering at the Melbourne Archdiocese’s Cardinal Knox Centre ahead of the event, with Bishop Mark Edwards a special guest.

Among the many Catholic groups at the protest were staff from Jesuit Social Services, as well as members of the Xavier Social Justice Network from Xavier College.

The event also drew contingents from other Christian denominations, as well as groups representing other community segments, including the Jewish community, Grandmothers Against Asylum, the medical community and the Victorian Humanist Society.

Josh Lourensz, from CAPSA, said hosting the event on Palm Sunday was significant for Christians, but the size and diversity of the gathering showed that the issue has support across the Australian community.

‘It’s aspirational. It’s about how we can treat people humanely and compassionately’, he said.

Fr Claude Mostowick MSC was among the speakers at the event, urging people to continue to stand in solidarity with those who are seeking asylum in Australia.

‘Don’t be discouraged. Don’t stop. Our voices need to be heard’, he said.

Watch: Eureka Street has produced a video of the event, featuring interviews with Josh Lourensz from CAPSA, as well as Bronwen Kellett from the Xavier Social Justice Network, and Rasika Crowley, Ignatian Service Coordinator at Xavier College.

View: Some photos of the Melbourne event.

View: Photos from the Sydney event from Jesuit Refugee Service.