Social entrepreneurs in the making at Saint Ignatius’ College Riverview

The program, developed in collaboration with Jesuit schools, allows students to immerse themselves in international development aid programs while gaining hands-on experience in social entrepreneurism. 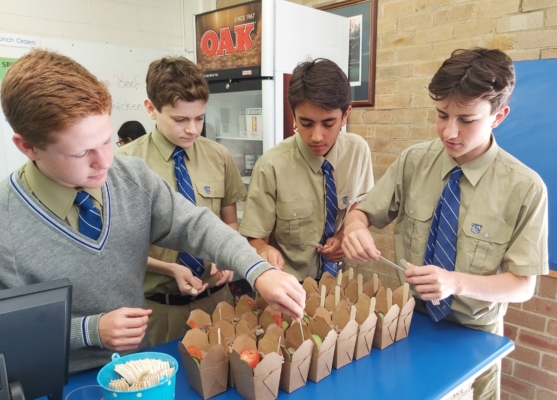 The winning students putting the final touches to the dish before it is served.

Every year, year 10 English students are provided with live programs that are supported by Jesuit Mission. In groups, they select a program to support by developing a fundraising activity. The group with the winning idea implements the activity, with all proceeds going to Jesuit Mission to support its programs.

This year, the winning group’s idea was to support the farmers in sustainable rice production in Cambodia, a Karuna Battambang Organisation Project supported by Jesuit Mission.

The idea was to promote and sell a traditional Cambodian dish, Beef Lok Lak, once a week at the school canteen, with all profits going to help the project.

Adam Sidhu, Hugh Samsa, James Roche-West and Ed Ryan are the creators of this simple yet engaging idea. As well as raising funds, they wanted to raise awareness of Cambodia and have other students engage in the project.

The activity ran from beginning of term four in October until the end of the school year. Beef Lok Lak proved to be a very popular dish with the students, thanks to the canteen manager Michele Law and her staff, who cooked the delicious and beautifully presented dish.

The dish sold out every week, and as a result, the project made more than $600 in profit.

Jesuit Mission is able to support the most vulnerable people living on the margins in over 13 countries because of the commitment from supporters such as Saint Ignatius’ College Riverview.