The soaring ambition and earthy reality of Sevenhill

The Sevenhill church is an icon on South Australian tourist brochures, but the history of the Sevenhill Mission is one of ambition constantly clawing at the edge of possibility.

The story of the Jesuit ventures at Sevenhill described in the richly informative and illustrated book The Vine and the Branches: the fruits of the Sevenhill Mission is one of ambition constantly clawing at the edge of possibility. 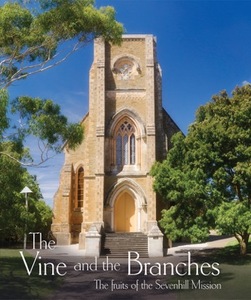 The Vine and the Branches: the fruits of the Sevenhill Mission

The title is ambiguous, with its reference both to viticulture and to the mission — apparently disparate things that Sevenhill strove to bring together. The name of the township itself sums up the soaring ambition and the earthy reality. The seven hills are not named after those edging the Clare Valley but the Seven Hills of Rome. The dip in the ground through the property down which water runs in torrential rain is known as the Tiber.

The first Jesuits from the Austro-Hungarian Empire came to Australia accompanying farmers fleeing from religious discrimination. They found their way to the Clare valley, and soon ministered to Polish immigrants, local Catholics and a few surviving Aboriginal people. But they were soon entrusted with the care of the pastoral and mining settlements in the North of the State. They built churches, invited Mary MacKillop’s Josephite Sisters to staff schools, and rode thousands of miles to care for their scattered communities.

At a later time the Austrian Jesuits made a commitment to Indigenous Australians by starting the Daly River Mission where Mary MacKillop’s brother Donald, formerly a boy at the Sevenhill school, was Superior. The venture was precarious, and perhaps the Jesuits withdrew from it when they recognised the difficulty of maintaining it.

Sevenhill was the centre of the Mission. It became a college — a name full of possibility at a time when mining an agriculture were drawing people to the area. It included a small boarding school for boys and for some time a seminary to prepare priests, with its own handsome church. It also produced wine, initially to provide altar wine for churches throughout the State.The Jesuit Brothers provided and developed the skills in building and in wine-making;  the priests provided the sacramental ministry and the learning necessary  for teaching and giving retreats throughout the southern states.

Later those high ambitions receded. The diocesan clergy grew sufficiently in numbers to take responsibility for the north, and boys and seminarians could find a better resourced education elsewhere. The Austrian Jesuits could no longer provide men for the mission, and were replaced by Irish Jesuits who based themselves in Melbourne. The mission shrank to Sevenhill and a few surrounding churches. In the depressed economic times at the end of the nineteenth century the Irish Mission Superior put the property on the market but could not find a buyer.

So Sevenhill survived, as it did through subsequent reviews. A succession of gifted and long sighted Brothers saw possibilities in the winery. They repeatedly modernised the winery and introduced a new range of grapes for table wines that could subsidise the altar wine. They then set out to market them. In time, of course, the table wines outsold the altar wine.

More recently, too, the Jesuits at Sevenhill tested the possibilities of running a retreat centre there. With improved transport retreatants from Adelaide or further afield could easily make a retreat at Sevenhill. The creature comforts of country cooking and wine with meals, and the inspiring history of the buildings drew retreatants who spilled over to the recently bought property across the road.

These changes have created new possibilities for integrating in a fresh way the constant elements in the history of Sevenhill: the pastoral mission built around the church (the sesquicentenary of whose consecration this book celebrates), the visitors who come to visit the church and winery, to buy wine and perhaps pray, and the ministry of the Spiritual Exercises.

The Sevenhill church is an icon on South Australian tourist brochures. As old buildings have been restored as shrines, for many people it has become a place of pilgrimage where they can pause a while, visit the church and shrines, wonder at the enterprise and vision of the early Jesuits, and share a picnic lunch by the winery. It reaches out to people on the margins of church as the early Jesuits reached out to the Indigenous people at the edge of society.

The heart of a mission lies in its people. This richly illustrated book presents many pictures of the people who have shaped Sevenhill and its church. It also testifies to the rigours of building churches and communities in a bare, baked land. It is a fascinating pictorial record that leads us deep into the craft of winemaking and the business of saving souls.