Sevenhill Nature Reserve contains the largest known population of the nationally Endangered orchid Caladenia argocalla (White Beauty Spider-orchid). This species is protected under the Commonwealth Environment Protection and Biodiversity Conservation Act 1999. It is currently known from thirteen populations, which mainly occur in the Clare Valley and the Barossa Valley regions of South Australia and has a total population size of 4,300 mature plants. Sevenhill nature reserve contains approximately 70 percent of the total population of Caladenia argocalla (approx. 3000 plus mature plants). 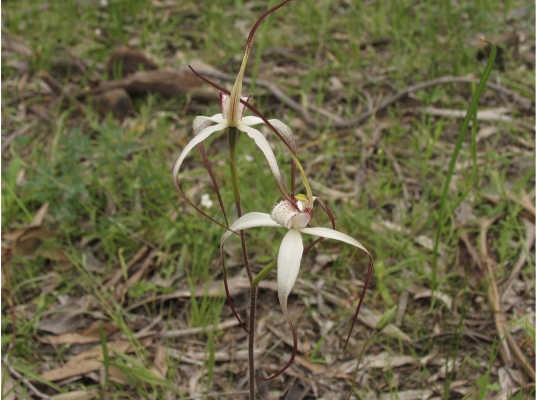 Caladenia argocalla usually produces a leaf in July or August. However, it does not always produce a leaf or flower every year. During mid August to mid September Caladenia argocalla produces buds, followed by flowering in late September to late October. Underground tuberoids are all that remain over the summer months.

The distribution of Caladenia argocalla is estimated to have declined by at least 80 percent in the last 50-100 years. This decline is mainly attributed to habitat loss and fragmentation caused by land clearance and degradation.

Weed invasion is currently the most significant threat to Caladenia argocalla. Topped Lavender is a serious threat to all populations in the Clare Valley region, especially Sevenhill scrub. Vegetation clearance, herbivory, lack of pollination, and inappropriate land management activities also threaten the species.

The Department for Environment and Heritage (DEH) is working with landholders and community groups to implement on-ground recovery actions for Caladenia argocalla. It is vital that Sevenhill nature reserve is adequately protected and managed for biodiversity conservation. It is particularly important that a weed control program is implemented, using minimal disturbance ‘bushcare’ techniques such as cutting and swabbing. 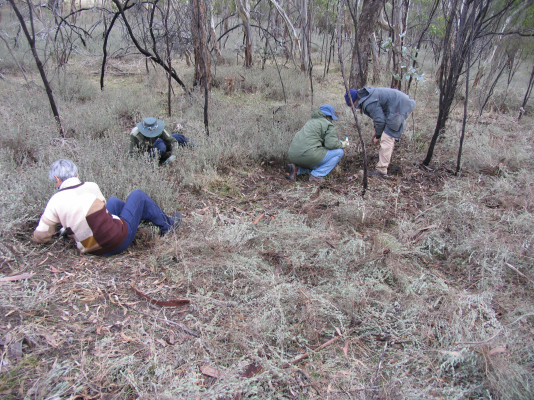 Solar power at the College, Winery and Retreat house

Capital spent on infrastructure to restrict use of imported water which would add additional salt to the soil from outside of the local area. (Mulching under vine and using drought-tolerant rootstocks on planting material

Restricted use of chemical-based fertilisers particularly nitrogen which if used adds to greenhouse gas emissions.

Parasitic mistletoe has been removed from some trees located around the Sevenhill College site.

Separation of paper, cardboard, glass, and plastics from the waste for recycling is standard practice.