Descendants of the first Polish settlers to the Clare Valley will join the South Australian Polish community, Jesuits and local Catholics for the anniversary of the arrival of Fr Leon Rogalski SJ as the country’s first chaplain to the Polish expatriate community.

Descendants of the first Polish settlers to the Clare Valley will join the South Australian Polish community, Jesuits and local Catholics for the anniversary of the arrival of Fr Leon Rogalski SJ as the country’s first chaplain to the Polish expatriate community.

Fr Rogalski arrived in SA on April 7 1870 to serve the growing Polish community in the region. He is believed to be one of the first. 150 years later, the descendants of those first settlers at Polish Hill River have spread across the country but families still trace their lineage back to these early Polish pioneers. 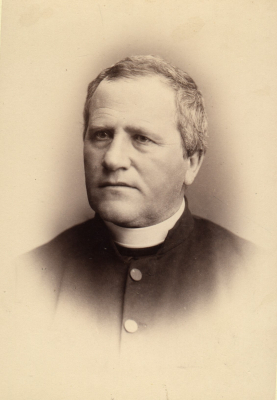 The Federation of Polish Organisations (FPO) in South Australia along with the Polish Hill River Church Museum Committee invite descendants of early Polish settlers back to the Clare Valley for the anniversary celebrations on the weekend of March 13, 14.

In addition to his preaching Fr Rogalski taught Polish children in their mother tongue and ran three pastoral missions as far as Tanunda.

The Polish Hill River Church dedicated to St Stanislaw Kostka was the first Polish church to be built in Australia. It was renovated by the Polish post World War II migrants and now is a museum and a monument to the early pioneers.

The Jesuit community in Victoria has funded the painting of the inside of the church and arranged for the hanging of a replica painting of St Stanislaw Kostka, the original of which was removed when the church was deconsecrated.

The Jesuits have also put into print Fr Rogalski’s letters to his superiors in Krakow and together with the Sevenhill Winery have released a Rogalski Shiraz.

The celebrations will commence with Stations of the Cross from Polish Hill River Museum and St Stanislaus Kostka Chapel at 10.30am on March 13.

Mass will be celebrated by Emeritus Bishop Greg O’Kelly SJ followed by lunch and cultural activities including Gorzkie Zale at Polish Hill River Chapel at 3pm and a visit to the historic Sevenhill cemetery.

The day will conclude with a barbecue dinner on the lawn of Sevenhill Cellars. To book, click here.

On Sunday there will be Mass at 9am in St Aloysius Church, Sevenhill, following a blessing of the crypt where Fr Rogalski was interred after his death on June 6 1906.

The FPO is organising buses from Adelaide to Sevenhill. For bookings and timetable information, phone 8232 1464 before March 6. Bus fare: $30 or $20 for FPO members.

This article was originally published in The Southern Cross.