‘I am convinced that the person of Father Pedro Arrupe, in this time of grace as we move toward a desired beatification, will inspire in Jesuits and in those with whom we partner in mission a greater desire of union and spiritual renewal’, said Fr General Arturo Sosa. 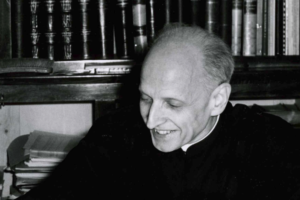 ‘The process toward possible beatification of Fr Pedro Arrupe, the 28th Superior General of the Society of Jesus, has officially begun’, said Fr Sosa. ‘From now on, therefore, he is considered a “Servant of God”.’

The process is taking place in the Diocese of Rome where Arrupe died. To support the cause, a new website has been launched with information about Fr Arrupe’s life, testimonials from those who knew him, and an archive of some of his writings.

‘We are in the first stages of the cause’, said Fr Sosa. ‘Once the nihil obstat of the Holy See and the consent of the bishops closest to Rome in the Italian Episcopal Conference have been received, and the absence of obstacles among the People of God has been assured, on 5 February 2019 – the 28th anniversary of his death – the session formally opening the cause will take place at the Basilica of John Lateran.

‘Then, the various persons in charge of the diocesan process will begin their work by recording the testimony of more than one hundred witnesses, mainly from Spain, Japan and Italy.

‘In fact, in recent months, two commissions have already begun their labour, reviewing all his published works and many unpublished documents written by or about Fr Arrupe and the socio-ecclesial context in which he lived.’

Fr Arrupe became Superior General of the Jesuits in 1965 and participated in the last session of the Second Vatican Council. Fr Sosa noted that the 18 years Fr Arrupe spent as head of the Society coincided with the implementation of the Council.

‘His enthusiastic, free, wise and faithful presence in the tumultuous Church of the Council, on which the Spirit had shed its light, expressed the desire to integrate the best values of the tradition with those necessary for the adaptation of Christianity to new times’, said Fr Sosa. 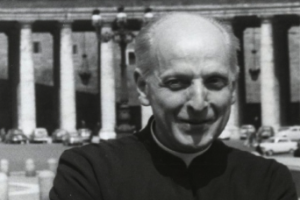 ‘In the decades following the Council, he applied it with “creative fidelity”, so much so that [his successor] Father Peter-Hans Kolvenbach in 2007 described him as a “prophet of the Conciliar renewal”.’

His contributions included an emphasis on inculturation in outreach and missionary work; a response to the call of refugees that led to the establishment of Jesuit Refugee Service; an invitation to students to be “men and women for others”; and the promotion of reconciliation, ecumenism and inter-religious dialogue.

‘At the same time, at the individual level, he treated each person with great respect, listening and trusting each one as the bearer of unique gifts of the Spirit’, said Fr Sosa.

‘This attitude was another face of his trust in the Lord, which was facilitated by the poverty and simplicity of his daily life. Until the end, he communicated a great goodness, which matured even more through his illness, when he knew that he was totally in the hands of God.’

Fr Sosa first announced that the beatification process for Fr Arrupe was underway earlier this year. Since then, he said, he has spoken to many people about him in his travels.

‘I have been able to see for myself how alive the memory and legacy of Fr Arrupe are. Eloquent and even moving postulatory letters received from all over the world confirm that his reputation for holiness is recognised in different sectors of the Church. This reputation of holiness is spontaneous, continuous and enduring.’

The Postulator General of the Society has been tasked with collecting information about Fr Arrupe’s life and holiness, his ongoing impact on the Society, and the graces and favours received through his intercession.

‘I am convinced that the person of Father Pedro Arrupe, in this time of grace as we move toward a desired beatification, will inspire in Jesuits and in those with whom we partner in mission a greater desire of union and spiritual renewal’, said Fr Sosa.