Seeking a spirituality of displacement

Fr Sacha Bermudez-Goldman SJ reflects on his doctoral research on giving the Spiritual Exercises to people who have experienced forced dislocation.

If spirituality has to do with our outlook in life and our response based on what is deepest in us and what has touched us or affected us mostly deeply, what might the spirituality of forcibly displaced people — asylum seekers, refugees, the internally displaced — be like?

Could we speak of a particular ‘spirituality of displacement’? If so, what might characterise it? What could we learn from it? Is there anything we could do to help nurture and sustain it in the lives of ex-refugees as they resettle in new countries such as Australia? Could Ignatian spirituality offer something to them?

These were some of the questions I tried to explore in my recently completed doctorate thesis. Through my years of accompaniment and friendship with asylum seekers and refugees, I have often been inspired by the depth of their faith in their various traditions. Many of them have in fact expressed that it was their faith — and their hope in a better future for themselves and their loved ones — that kept them going through their long journey of displacement, especially in moments of greatest trial and suffering. 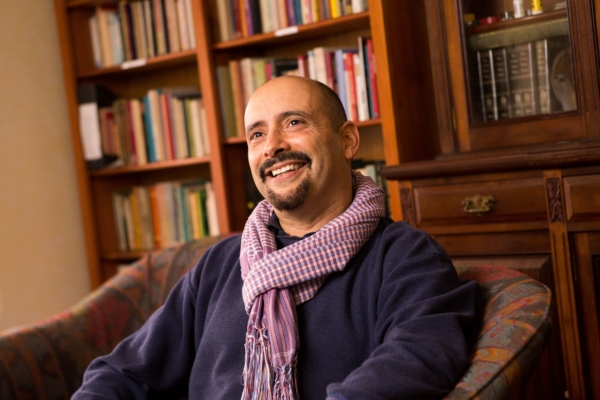 Some of their comments give testimony to that deep-rooted faith: ‘God is in control of my future, and my family is in his hands’; ‘If there is no longer hope where you are, then you have to do all that you can to get to a place where you can at least cultivate that hope’; ‘I have lost faith in human beings, my only prayer is that I do not let myself lose faith in God’; ‘I believe God is my Father and will not abandon me’; ‘Detention almost killed my soul; prayer and humanity saved me.’

A basic tenet of the Christian faith is that God gives people the graces they need to face the challenges they encounter throughout their lives. My research led me to conclude that for forcibly displaced people this fundamental grace is the gift of hope — a gift they not only receive and accept but also make their own to gift to others; a gift which constitutes the essential element of their spirituality.

A fundamental aspect of the spirituality of hope in forced displaced peoples is that they must literally hope against all hope. They must continue hoping even when there are no visible signs of hope anywhere around them. It is a spirituality also characterised by a great deal of paradox, where realities that in principle should only be bearers of damnation and death can become bearers of life and blessing: it is possible to love your greatest enemy, who by a twist of fate becomes your neighbour in a refugee camp, who offers a piece of bread or a blanket that saves the life of your dying child.

It is also a spirituality of hope based on the belief in a God who never abandons forcibly displaced people despite all evidences to the contrary. A God who is present in their extreme suffering (because God has lived it) and somehow will make sense of that suffering, even if there does not seem to be a conceivable way for this to happen. And it is a spirituality of hope based on companionship, solidarity and relationship, because forcibly displaced persons cannot survive on their own.

The hope of forcibly displaced peoples is a hope that has had to survive the in-survivable. And this is the reason that their testimony of hope is so credible. The key in the proclamation of hope does not reside in the consistency or the quality of its content, nor even in the way that it is transmitted, but in the credibility of the witness. In the case of forcibly displaced people this credibility means that their hope can simply be expressed through a smile — words are not needed because one who has lived through hell and can still smile is an icon of hope.

As survivors of forced displacement settle into their new homes, they hope to put their pain and suffering behind. They know it will not be easy to start a new life, but they trust that the God who never abandoned them during the displacement journey, as horrific as it might have been, will continue to bless them and accompany them as they resume their journey of life, now in peace.

But it has to be ‘relevant’ spiritual support that addresses the issues and circumstances forcibly displaced people have had to live through and continue to deal with. Thus, through my thesis I sought to answer the question of how to nurture the spiritual lives of survivors of forced displacement, now in their countries of resettlement, in ways that could help them sustain their faith and hope, and lead to healing and freedom and to living abundant lives in service to God and to the world.

My proposed answer was to offer a program of spiritual exercises and resources in the Ignatian tradition that would meet their current needs and circumstances. This program is now ready, and I hope to be able to offer it soon to ex-refugees who have resettled in Australia.