Fr Ross Jones SJ, Fr Peter Hosking SJ, and Fr Rob Davoren SJ have all been farewelled from their schools in recent weeks as they prepare to take up new roles in 2018.

Communities at three Jesuit schools across Australia have held events in recent weeks farewelling Jesuits who are moving on to new ministries at the end of this year. 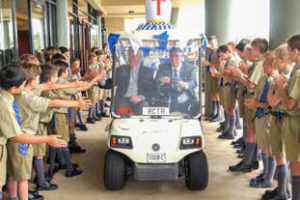 The school community at St Ignatius’ College Riverview came together on 22 November for a Mass and assembly to thank Fr Ross Jones SJ for his contribution to the school as Rector over the last seven years.

Following the Mass, Fr Jones was ushered into the ‘Rector Mobile’ (pictured) and driven through the school to a special morning tea featuring his favourite delicacy – sausage rolls. In appreciation for the many pieces of art that Fr Jones commissioned in his time at the school, he was presented with a simulacrum of two panels from the College Chapel, by artist Michael Christie.

Riverview Principal Dr Paul Hine said it was clear at the event that the students had a great admiration and respect for Fr Jones.

‘It was clear that the current Rector is something of a cultural icon in the school, much loved and much respected. But he is bigger than any notions of being indispensable – he is a man who has made an unfailing commitment to others and he has served his ministry with great zeal and faith’, he said. 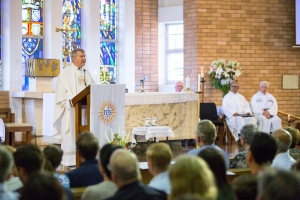 Students, families, staff and Old Boys gathered to thank both Peter and Martin for their contributions to the school – Peter’s over the last seven years and Martin’s over 38 years.

As thanks for this contributions, Fr Hosking was presented with a stole to take to his new school, St Ignatius’ College Adelaide. The stole features the Southern Cross, and has an inscription saying ‘Ad Majora Natus – 2011-2017’. 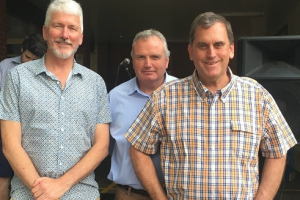 St Ignatius’ College Adelaide has had a number of farewells for Fr Rob Davoren, who is finishing up as both Rector and principal at the school.

Parents and friends held a picnic at the Junior School on Sunday 11 November which was an opportunity to farewell Fr Davoren and the Head of Junior School, Mr Shaun Fitzpatrick who is also leaving.

The Athelstone Eucharistic Community held a morning tea on Sunday 3 December, and staff at the college will hold another farewell before the end of the term.

Fr Davoren has been appointed as the new Province Socius, and will be replacing Fr Robin Koning in the role in late April, 2018.