The issue of COVID vaccinations has raised matters of conscience in both theological and civil legal terms, writes Fr Ross Jones SJ. 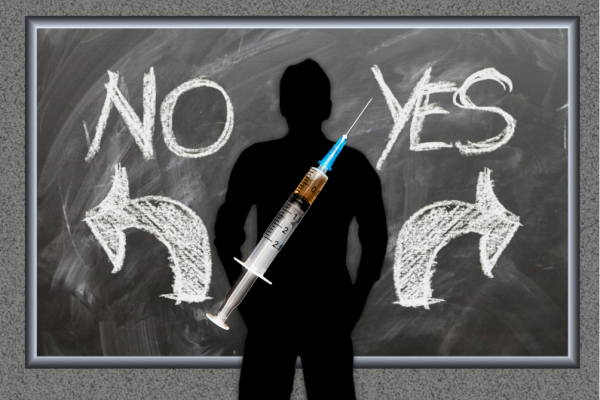 As an infant-school student, my first introduction to the notion of conscience was not the Penny Catechism, nor the good Josephite sisters, but courtesy of Jiminy Cricket in Walt Disney’s cartoon adaptation of the story of Pinocchio. That little chirper sang the memorable line, “Always let your conscience be your guide”.

Of course, the principle, of the primacy of conscience – that is, one’s personal conscience as the ultimate guide in all our moral activity – predates Jiminy by some seven centuries. Such was clearly established by one of the Church’s greatest theologians, the Dominican St Thomas Aquinas. He even proposed that an erroneous conscience was morally binding, provided one had made every possible effort to inform one’s conscience.

“Conscience is the person’s most secret core, and their sanctuary. There they are alone with God whose voice echoes in their depths.”

A sanctuary. And, significantly, “alone with God” – no props, no bible, no parish priest leaning over one’s shoulder or a canon or civil lawyer over the other. Just you with your integrity and with God.

The recently canonised St John Henry Cardinal Newman underscored this primacy in a letter to the Duke of Norfolk (England’s leading Catholic at the time) in 1875:

Certainly, if I am obliged to bring religion into after-dinner toasts, (which indeed does not seem quite the thing) I shall drink – to the Pope, if you please, – still, to Conscience first, and to the Pope afterwards.

A boldly forceful position, especially given that Newman penned this only five years after the First Vatican Council declared the doctrine of papal infallibility.

However, appeal to the primacy of conscience comes with certain expectations. One’s moral position cannot be just a whim, or based on ignorance, or a prejudice. The moral person is expected to have an “informed” or “formed” conscience. That is, time must be taken, and effort expended, to first gather all the data.

Freedom of conscience, of course, does not mean “do what you will”. To have a properly informed conscience, one must seek out either the Church’s tradition and teaching, or a properly enacted State or National law. Next pray and seriously reflect over it. Then try to bridge any gaps, if such exist, between that teaching or position and your own considered beliefs. Matters of gravity are not to be treated lightly or slickly. Only then one can act in good faith and in good conscience. By way of example in the Church forum, I would suggest there are many Catholic couples who, in good conscience and after prayerful reflection, have considered Pope Paul VI’s 1968 encyclical naming artificial forms of birth control “intrinsically evil”, but then discerned with integrity to choose what they see as a higher value. In their sanctuary before their God.

This is in contradistinction to culpable ignorance – a deliberately ill-informed conscience where one chooses not to gather all the data, but to cultivate a “hardness of heart” – for which the person is to blame. That individual’s starting point may take the form of “I don’t care what the Church teaches or what the law says …” And they are in error.

As I have indicated in the foregoing, one is often called to act on conscience in civil as well as Church issues. Regarding the former, the 1960s-70s in Australia were marked by civil disobedience with conscientious objectors to the National Service Act of 1964 and, specifically, to conscription for the then Vietnam War. This was an Act passed by a legitimate, democratically elected Parliament. But some young men, in good conscience, discerned they could not comply with conscription in general, in this particular war. And for their stance, they were jailed in military prisons – some claiming they experienced inhumane treatment therein. Their choice in integrity came with a cost. Interestingly, the very first act of the newly-elected Whitlam government in 1972 was to liberate these detainees of conscience.

The issue of COVID vaccinations has raised matters of conscience in both theological and civil legal terms. Almost a year ago now in this column, I raised the anxiety that some Catholics had (and may still have) about the ethics of such a vaccination. This was premised on the fact that vaccines could be derived from human tissue electively aborted many years earlier. However, the Vatican’s Pastoral Academy for Life declared there is no material cooperation in the taking of a human life here. It is not a case of “the end justifying the means”. The abortion was not conducted to produce research tissue. It is analogous to a man (a registered organ donor) being shot by a Mafia hit man because of a feud, then his organs being harvested for someone critically ill. The man was not killed to secure his kidneys, heart or corneas. The evil of his murder is quite independent of the good to be done with his planned donation.

The other matter of conscience here has to do with a government mandating vaccination before people may enjoy certain civil liberties. There has already been talk among some of objections to governments in the future prohibiting overseas travel without a COVID vaccination. These people have short memories. When I first began to travel overseas in the 1970s, all Australians travelling abroad had to carry a card verifying that they were vaccinated against such diseases as hepatitis, cholera, typhoid and smallpox. Even more for certain other destinations. People accepted this for the greater good.

At the moment, nursing homes make a COVID vaccination a condition of entry. The NSW government is currently exploring mandatory vaccinations for all health workers. Last weekend, the same government announced compulsory vaccination for all construction workers and tradesmen in Western Sydney who want a job, and also for all NSW airport and quarantine workers. There are exemptions granted on medical grounds.

Presently, following Government guidelines, the College encourages all staff and all students over sixteen years of age, who are eligible for a vaccine, to be vaccinated. We respect the right of parents to make their own decisions regarding their children. At this stage, vaccination is not compulsory. Some may choose not to be vaccinated on medical, ethical or religious grounds. And the latter two categories are matters of conscience. We would respect all three positions.

I would suggest that forming one’s conscience for a COVID decision employs the same principles as for one concerning a response to a Church teaching. Those elements are: Consider the legitimate authority of the one who issues the expectation. Be free to take into account, in this case, a range of other health care professionals’ opinions. Think through any ethical or moral considerations. Then reflect deeply – unswayed by, say, those strident street demonstrators and their banners of “Fully Vaccinated Against the Gladys Variant”, “Freedom not Vax”, even “Drain the Swamp”. Or the online anti-vaxxer scare tactics which have claimed the vaccine will make women sterile or cause Bell’s palsy, or that mRNA technology will mutate your DNA. Listening to such voices will only mean consciences will not just be “unformed”, they will be “ill-informed”.

Lockdown has certainly forced a certain reflective mode upon us. So let us use it well as we discern the way ahead – for ourselves, for those we love, and for the community which also bears the consequence of some of our choices.