Remembering those who served God and country on ANZAC Day

Catholic chaplains played a significant role in World War I, providing pastoral care and support to servicemen and women on the ground. In Province history, there have been a number of Jesuit chaplains who also served in the military.

On Anzac Day, we will commemorate those who served and died in all wars, conflicts, and peacekeeping operations, and acknowledge the contribution and suffering of all those who have served.

Catholic chaplains played a significant role in World War I, providing pastoral care and support to servicemen and women on the ground. In Province history, there have been a number of Jesuit chaplains who also served in the military.

Much of the work of Catholic chaplains involved the administration of the sacraments to Catholic servicemen. They worked alongside chaplains of other denominations, living alongside the soldiers as the fighting played out around them. The letters they wrote were published in Jesuit journals, and provide an insight into life serving God during the war.

“Up at 3am, a ride of one hour after my Mass, train for some hours, and then a march to a camp in the rear. We arrived at 4pm and encamped in thick mud”, wrote English Jesuit Fr D Doyle, chaplain to the 2nd Leinster Regiment (recruited from Ireland), in January 1916.

“You cannot realize what it is like, duck-boards have to be put down before one can move about. Over these one goes at a kind of fox-trot, for they are slippery. Even so the spirits of the men were wonderful, and next day they set to work to tidy things up and bring more comfort into things, though it is impossible to do anything to get rid of the mud…My hut was just the size of a novice’s cubicle, unfurnished absolutely, and, instead of a door, a piece of canvas put up to keep out the wind, which was cutting…My Mass I said in a stable open at the side. The men had to stand ankle-deep in mud the whole time. Yet someone always finds a piece of carpet or sacking for the priest to stand on…”

On this day, we remember all those Jesuits who served God and country during these conflicts. Two of those Jesuits were Fr Joseph Hearn, who was parish priest at St Ignatius Richmond before he became a chaplain, and Fr James Magan, who came to Australia after the war and taught at Xavier College, St Aloysius College and St Ignatius’ College Riverview

The following two profiles are extracted from The Australian Dictionary of Jesuit Biography 1848 – 2015 by David Strong SJ, published by Halstead Press. 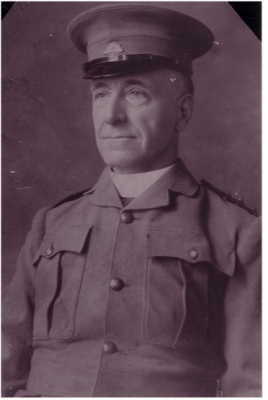 Joseph Hearn was an old boy of Tullamore College, St Stanislaus, before its amalgamation with Clongowes. He entered the Society at Milltown Park, 31 October 1878, at the age of 24.

He came to Australia and taught at St Patrick’s College, 1892-96, and Riverview for a short time in 1896. He was appointed superior and parish priest of Richmond, 1896-1914, and was a mission consultor at the same time. Then he became a military chaplain and served with the Australian Expeditionary Force in its campaign in the Dardanelles. He served with the 7th and then the 2nd Infantry Battalions, returning to Australia early in 1917.

Hearn was called ‘blood and iron Joe’, and lived up to this by the severity of his manner, both with himself and others. He had a vein of sardonic humour that suited well with the temper of the First AIF. He joined the army at the age of 60. Though his service in the army tended to overshadow his other work, the real high point of his career was his long period as parish priest of Richmond; the parish schools are especially a monument to him.

Magan was a most devoted and respected pastor, especially good with young people. He was also very humble, and would even ask for advice about his sermons and retreat notes, even though he was highly skilled in preaching.

He was educated at Castleknock College by the Vincentians, and Clongowes College, before he entered the Society at Tullamore, 7 September 1899. After his juniorate there in mathematics and classics, he studied philosophy at Gemert, Toulouse province, 1903-06, and then taught at Mungret and Clongowes, 1906-12. Theology studies at Milltown Park followed, 1912-16, and tertianship at Tullamore, 1916-17.

For a few years afterwards, Magan became a military chaplain with the 6th York and Lancasters, British Expeditionary Forces, 1917-19. Afterwards, he set sail for Australia, teaching first at Xavier College, 1920-22; then at St Aloysius’ College, 1923-24, and finally spent a year at Riverview.

They shall grow not old, as we that are left grow old;
Age shall not weary them, nor the years condemn.
At the going down of the sun and in the morning
We will remember them.