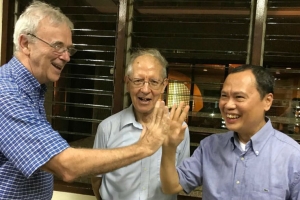 Infectious humour, refreshing simplicity, clear insight and natural warmth have characterised Fr Adolfo Nicolás in many roles and responsibilities. Jesuits and collaborators across the world could relate to him as a leader certainly and easily as a friend. Somehow the roles of leadership to which he was called, which included Provincial of the Japanese Province (1993 – 1999), Conference President (2004 – 2008) and later General (2008 – 2016), were a surprise to him. Yet he fulfilled each with a distinctive simplicity, grace and warmth.

As a Spanish missionary in Japanese society, Nico, as he was affectionately and widely known, developed a sensitivity and respect for cultural difference. He guided and taught at the richly diverse East Asian Pastoral Institute (EAPI) from 1978 to 1984. After completing his term as Provincial of Japan he lived in a tiny house among migrant workers on the outskirts of Tokyo. As President of the Asia Pacific Jesuit Conference, he moved easily and with authority in many cultures, at home in the slums of Navotas in Manila and the villages of Battambang in Cambodia, an adult educator, a theologian, a pastor and a leader.

Nico’s time with migrant workers marked him. In his first homily as Superior General, he told of a Filipina migrant worker who consoled her friend, saying: “Let us go to the church to speak to God, because God listens to the poor and we are poor.”  Ever so simple, yet carrying a profound wisdom typical of Nico. Referring back to that experience, he spoke of how to find silence in a noisy, crowded space. To pray, learn to enjoy silence, he would say. “In time you will realise that you are not alone.”   From that migrant community he was called to lead the Jesuit Conference. In Manila again, he returned to live at the EAPI and delighted in helping with part-time teaching. As President he reached out to befriend many and encourage frontier mission initiatives across Asia Pacific, always with time for the collaborators, especially the lay people.

Fr Nicolas’ nose was ever sensitive to the smell of Jesuit triumphalism. A good Jesuit parish, he would say, is first and foremost a good parish. Jesuit education must first be good education. It should model a way to reach the poor. Marriage is not a Christian invention, he would say. “For thousands of years we have been searching.” “Pastors and Ministers of the Word have to become good helpers for good and fruitful encounters”… knowing where people really are, presenting the Word, and being good company in the search for depth. “Good Christian leadership”, he said, “is a service of love for community”. Adolfo Nicolás was that ‘good Christian leader’, constantly modelling service of the community and seeing that each encounter is fruitful.

He rarely wrote in full his talks or classes, at least until he became General, yet he prepared them thoroughly, making detailed notes that guided him as he led an audience through wit, paradox and stories to deeper wisdom. His core message was: “Be happy, be free, be centred on God and Jesus Christ”. Constantly he would stress the need for depth as against the “globalisation of superficiality”.

Soon after Fr Arturo Sosa was appointed by the 36th General Congregation in October 2016 to succeed him, Adolfo Nicolás was diagnosed with progressive supranuclear palsy, an uncommon disability that affects movement, control of walking and balance, speech, swallowing, and vision.  The effects of this condition had begun to appear when he had fallen unexpectedly a number of times, or with occasional slowness of speech. As this disability increasingly took over his body, then or in the few years that followed, he never lost his focus, wit or his care for the people around him. Rather, as his speech became more laboured, every word was measured and insightful. At first he was able to live at Arrupe International Residence in Manila with Jesuits from all over Asia and beyond studying theology.  He rejoined his beloved EAPI, occasioning unforgettable encounters with the scholastics, and participants at EAPI.  As his disability progressed, he returned to Japan to his own Province to be cared for there.