JRS Australia joined NGO leaders and community groups in Canberra on Monday to implore the Australian Government to stop cuts that are leading to a humanitarian crisis.

The Turnbull government is cutting life-saving supports, including basic financial assistance and torture and trauma counselling, for people seeking asylum who have been waiting for years for decisions on their refugee claims.

Over 13,000 people nationally, including families with children, are at risk of losing all income support and are at risk of being left homeless and hungry.

‘A preventable humanitarian crisis looms in our communities across Australia: this Government-created crisis will see people in our neighbourhoods, schools and communities thrown on to the streets’, said Refugee Council of Australia (RCOA) CEO Paul Power. 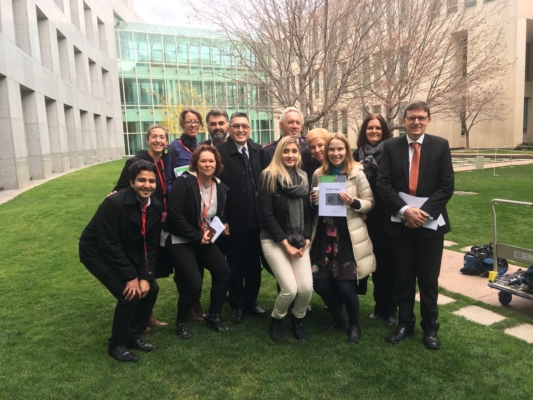 Leaders from key NGOs and community groups at the end of a press conference in #Parliament discussing cuts in support services to people seeking asylum. JRS Australia director Carolina Gottardo is in the front row, second from the right.

‘This calculated cruelty denies people seeking asylum living in our community their basic human rights and dignity. It goes against everything that Australia stands for: the fair go, an egalitarian society, decency and dignity for all.’

Under the changes, people on SRSS who have the right to work and do not meet a very high threshold of vulnerability will be exited from the program, losing all financial support. This will happen even if they are unemployed, and they will not be given further assistance to find work.

‘The government is cutting off the sole source of income for thousands of people seeking asylum. People will lose their housing, their ability to feed their families, and will be forced to access emergency relief.

‘The Australian Government has a responsibility to ensure that everyone has access to a minimum level of income if they are in need. Removing SRSS from people seeking asylum shirks this responsibility. This is a human rights issue and we urge the government to reverse this decision to ensure that individuals and families are not left destitute.’

The number of people eligible for support has reduced dramatically since August 2017, when the Government made changes to the SRSS program without consulting service providers or peak bodies.

Many are now coming to organisations that receive no government funding, such as Jesuit Refugee Service.

JRS CEO, Carolina Gottardo, said, ‘We are really struggling to meet the growing demand for safe, affordable, and sustainable housing, but also for basic necessities such as food, clothing, sanitary pads and nappies. While we are all doing the best we can, with the deep impact of these cuts, it’s just not enough. JRS staff and volunteers say it’s like nothing they’ve seen before.’

A significant number of people currently in the SRSS program are likely to be refugees who will remain in Australia for years to come. The changes are forcing already vulnerable people into destitution, particularly when many are likely to become long-term residents of Australia.

One such person is Sarvenaz, who was cut off from the SRSS program in February because she is studying full-time on a scholarship at Swinburne University. She is part of the media conference and delegation to Canberra.

‘It’s important for me to come to Canberra and speak up about this issue because I want everyone to know the real consequences of the SRSS cuts and I don’t want to see anyone else going through what I went through’, she said.

‘Something has constantly been going on in my mind over the past months – Why did they make me choose between studying and surviving? And why did I have to suffer just because I wanted to study?’