Jesuit Refugee Service Australia has been working with a number of schools in Sydney to provide education programs and facilitate advocacy work around the experiences of people seeking asylum, writes Anne Nesbitt.

A group of boys crowd around Simon as he finishes his story. The horrific details of the war in Syria that resulted in Simon’s journey to Australia has piqued their interest. Students often experience a personal connection to Simon and feel compelled to talk to him.

Another speaker tells of being awakened in the middle of the night as a ten year old. Her parents dressed her in several layers of clothes, put her into a taxi, and told her they were going on holiday. The ‘holiday’ included a seven day walk through the snowy mountains from Iran into Iraq, eating only raisins for sustenance. To this day, she cannot eat raisins.

These are but two of many speakers with extraordinary life experiences who visit Sydney based schools as part of Jesuit Refugee Service’s Refugee Voices program. Each story is unique, but all of the speakers show amazing resilience, perseverance and courage.

In 2018, JRS has partnered with 15 schools to run the Refugee Voices program. The Catholic Education Diocese of Parramatta has also worked closely with JRS to build capacity among its staff on issues of people seeking asylum. 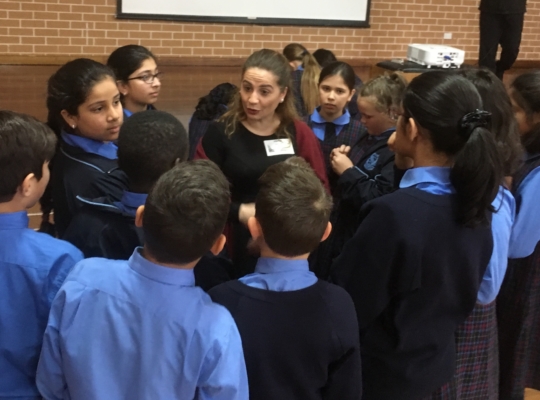 Speaker Deena speaks to students at Our Lady of Lourdes Primary School.

Based on storytelling, the program aims to raise awareness of issues surrounding people seeking asylum and refugees, particularly those whom JRS accompanies, serves, and advocates for here in Australia.

The opportunity to hear a person with lived experience describe their previous life and the need to seek protection from persecution is very powerful.

Using elements of the Ignatian Pedagogical Paradigm, the challenge is to empower students to further reflect upon and engage with the issues, and take action to question the injustices of the present system.

Confronted by the lived experiences of these speakers, students are made to question their preconceptions, and learning becomes transformative.

While each presentation is tailored to a theme nominated by the school, all begin with a JRS representative explaining the current global situation for refugees, utilising visuals and UNHCR statistical data.

It is critical for students to clearly understand Australia’s complicated refugee and asylum policies, and to acknowledge the impact of our response to the current world situation.

Opportunities for further action are suggested and provided to students and the school community, such as writing to MPs or organising events. This enables the students to consider their role in Australian society and how they can move beyond knowledge to action.

JRS’s work with schools is not limited to the speaking program. In 2018, an additional 13 schools have engaged with JRS in a variety of ways.

The Australia Province’s Bookends Project maintains a website with updated JRS campaigns and actions undertaken by various ministries with regard to the two bookends: how the country treats people seeking asylum and how it treats First Nations people.

By highlighting the various efforts undertaken by Jesuit schools, the message is being shared, and schools are encouraged to submit their news.

Examples of such support and engagement abound.

Recently, JRS has begun to work with the St Aloysius’ College Beninson Society on advocacy issues. The JRS Policy and Advocacy Coordinator plans to include members of this social justice-minded group in a meeting with their local MP to discuss policy.

Many schools celebrated Refugee Week with fundraising activities for JRS, including Jesuit schools across the Province. Loyola Mount Druitt, for example, held a Rice Day and raised funds that were given to JRS during the Refugee Week Mass.

JRS has been invited to work with many schools in the Parramatta Diocese to support Bishop Vincent Long’s campaign ‘Walking with Refugees and People Seeking Protection’, inviting all to begin a conversation with and about refugees. Catholic diocesan schools have undertaken activities and projects within their schools to learn about refugees.

The year one students at St Francis of Assisi (Glendenning) sold popcorn, hot corn, and cakes in several stalls over lunch to raise money for JRS, while the year five students at St Angela’s (Castle Hill) ran Mission Markets for a week after completing a project-based learning unit on JRS.

In partnership with Sydney Alliance, JRS helped plan and conduct a Table Talk at St Oliver’s in Harris Park. The year 12 students at Xavier College (Llandilo) have chosen their class gift to be a sleepover fundraiser for JRS; the sleepover will begin with a presentation by Simon and JRS to the students.

Numerous schools, including Jesuit schools, continually provide donations for the Foodbank operated out of the JRS Parramatta offices. Multiple appeals for Foodbank items are held at various times of the school year as it relies totally on donations.

During Riverview’s celebration of Refugee Week, the Director of Jesuit Refugee Service, Carolina Gottardo, spoke at the school assembly about a family seeking asylum that JRS assists, describing the anguish the family is experiencing due to Status Resolution System Service (SRSS) cuts. The school also held a financial appeal to help assist these families.

JRS is appreciative of all the support received from the Sydney based schools and looks forward to future collaboration with schools to raise awareness and facilitate action about current government policy.