Reflections as a Jesuit Bishop

"It is an awesome vocation to try to be a Shepherd after the heart of Jesus. Yet that is what is demanded if one is to be faithful to the office of Bishop." - +Gregory O'Kelly SJ Bishop Emeritus

Father Provincial has asked me to make some reflections on my thirteen active years as a Jesuit bishop, in the dioceses of Adelaide and Port Pirie.

It is an awesome vocation to try to be a Shepherd after the heart of Jesus. Yet that is what is demanded if one is to be faithful to the office of Bishop. The scope of the vocation, the ultimate human responsibility placed in your hands to guide, mould and care for the whole Catholic Christian community of a diocese is daunting daily. If a bishop ceases to feel that stress, then, for the sake of the People of God, it is time to step down. 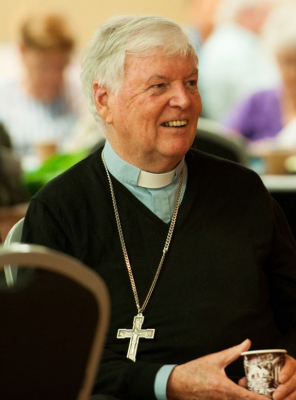 +Gregory O’Kelly at a Diocesan Assembly.

Father Ignatius made it clear he did not want Jesuits to be made bishops. An indication of his adaptive spirituality, however, was that he did condone occasional exceptions. And the difference in the social and political role of bishops between the 16th century and now creates a different reality. Nevertheless, with his clear mind on the issue and a vow against prelatures, it remains part of our Jesuit culture not to aspire or even think about such appointments. So when the call comes to assume the episcopal office, it is a devastating experience. One is being called both to live a lonely calling of final responsibility, and in a family not your own. The warmth and the affection of the diocesan priests around you changes that last bit. But the call having come, and reference made by the Nuncio to the special vow of the Jesuits to undertake missions of the Holy Father, the question is fundamental: is this really God’s will for me?

Many prayers and anguish; consultation with five brother Jesuits; phone calls to Fr General Kolvenbach, whose advice was “follow what the Spirit tells you”, advice that sent me back to square one. Jesuits are formed in an intelligent but also obediential culture, so any message that “the Holy Father wants to appoint you as bishop …” has a real impact. Our Jesuit Constitutions speak bluntly; our obedience is “first to the sovereign pontiff and then to superiors of the Society” (para. 547). That was a hard one to get around. I was told the Bishops Conference would profit from my experience in Catholic education and my experience of Jesuit spirituality and formation. Certainly, I was to share that as a bishop in my roles as member and then chair of the National Catholic Education Commission and the National Council of Caritas Australia.

My Jesuit brothers were mainly—but not all, of course, given their diversity—very supportive and a large number took the trouble to attend the ordination, for which I was profoundly grateful, and reassured. I sensed they were happier when I was transferred in 2009 from being Auxiliary Bishop of Adelaide to becoming Bishop of the Diocese of Port Pirie. This was a more missionary appointment, it seemed. There are no Episcopal Palaces or marble churches in a remote country diocese. But there was a vocations crisis, with a significant number of the 28 clergy being elderly and still running parishes beyond retirement age, and no seminarians for several years, no Religious priests or brothers, and the number of Religious Sisters had declined to a dozen or so, who were not young. The entire administration staff in the Diocesan Office was the bishop’s secretary and a receptionist. The financial records were done part-time by one of the priests of the parish. There was a very large debt, and an annually diminishing income stream as parishes based on little country towns experienced the effects of a dwindling population. We were 57 churches, mostly in small and distant communities, along with thirteen schools and three Homes for the Aged. All this in an area the same size as France and Germany put together, or three times the size of Italy, going from the industrial towns on the Gulf to the great cattle Stations and aboriginal lands in the north. Long car trips were the order of the day when visiting far-flung parishes like Ceduna or Coober Pedy, or Stations on the way to Uluru or lnnamincka; trips to Adelaide needed to be frequent, for various local and interstate meetings involving the bishop, taking three hours each way.

When for two years I was also made Apostolic Administrator of the Adelaide Archdiocese, the Adelaide visits might be twice a week, there and back. After I fell asleep on one occasion and went off the road into the scrub, air bags out, gas that I thought was smoke, writing the car off, driver’s door jammed, it was decided to have parishioners drive me on the long trips. 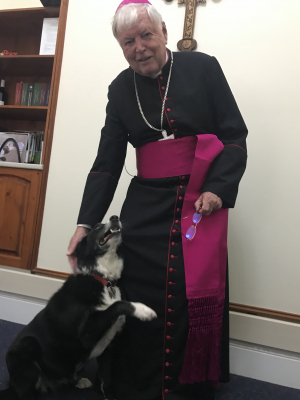 It was one of my sayings, that we didn’t have problems in the diocese, only challenges. We certainly had a marvellous and very loyal spirit among the clergy and the people, and a very strong attachment to the diocese. The schools and Centacare Catholic were in very good shape, active and appreciated. In terms of my own vocation, I saw my task as bishop as being akin to other Jesuits in the Province who were working on special or individual ministries, separate from the normal corporate commitments of the Province. What was consoling to me was that I was taking up what the pioneer Jesuits from Sevenhill had started. They were the first priests and brothers who built the diocese, doing the great horseback journeys to beyond the Northern Flinders, establishing more than twenty churches as the little towns sprang up, and liaising with St Mary MacKillop as she founded a similar number of convent schools in the hamlets and mining towns. It gave me a sense of pride and unworthiness to be following such men and women.

There are two Churches in Australia, one the coastal and inner regional Church, the other the Outback Church. The daily challenge facing the second is called viability. Hence the need to be trusting in God and missionary, and to look to fostering the gifts we do have. One of the great blessings of the diocese has been its Diocesan Assembly, held every year for over twenty years, not matched in other dioceses, a two-day gathering involving over two hundred parishioners and their clergy from each corner of the diocese, and concluding with the great ecclesial liturgy of the Mass of Holy Chrism. The Assembly serves to strengthen diocesan unity and spirit and offers means to reinforce strategies such as the five Regional Diocesan Councils, and to recognize that none or few parishes have sufficient resources within themselves, but grouped together they may cope. The spirit this Assembly fosters feeds the diocese and its initiatives and was a source for the wonderful energy that inspired so much involvement with the asylum seekers in Woomera and Baxter, a spiritual legacy we have not ceased to draw upon since.

Two of the initiatives were to face our need to strengthen our prison ministry and the aboriginal apostolate. With eight hundred prisoners in three prisons, and with the social disaster that affects so many of our urban and homeland aboriginal people, we increased the personnel involvement of laity, clergy and religious Sisters from India in those ministries, making those works features of our diocese. I went on some recruiting visits to the Philippines for seminarians, and some seven new priests, including two Aussies and one Iraqi, have come into the diocese; we also now have two students for priesthood, one local and one Pinoy. It was important also to introduce and promote the Permanent Diaconate, and we are blessed now with two Deacons serving regional communities.

What has been a saving boon to the diocese has been the securing of good leadership/management skills in key apostolates – clergy leadership in the Vicar General, financial and business management in the Bursar and staff, the directorship of Catholic Education and our schools, Centacare Catholic, which serves the poor on many fronts, the Aged Care Homes. We continue to have significant financial challenges and must still search for appropriate pastoral models that can serve our needs over such distances, but the placing of our leaders of those positions has been a long-awaited and saving blessing for us into the future.

As a bishop physically separated from a Jesuit community, it was a priority for me to keep in touch with the brethren and the Province as much as possible. Visits to Sevenhill, partaking in Jesuit Feast Days with the Adelaide communities, going to Province assembly days, Anglesea Villas, sending emails to individual Jesuits for anniversaries were all means to do more than stay in touch; they helped reinforce me in my own ministry, as did, of course, the affection and support of the country parish communities, from townies to farmers. The Jesuit Provincials were assiduous in their sustained interest in my welfare, and the two personal, hand-written letters of support from Fr General Adolfo Nicolás, and his open warmth and welcome when I stayed at the Jesuit Curia in Rome on several occasions meant a very great deal to me. Now that I am emeritus and back with the Norwood community, the shared life is a rediscovered blessing. The Province never left my heart, but shares it now with the most grateful memories of the wonderful people and clergy of the diocese for whom it was my privilege to be their bishop for more than eleven years. I was enriched by my bond of affection with so many of the people and the priests of the diocese, especially those in the Pirie presbytery and those in the seminary and from overseas with whom I had dealt so closely.

A priest from here, called recently to be a bishop in another country, wrote me for some counsel when his appointment was announced, and these are the reflections I sent him, composed as I was moving out of my leadership of the diocese:

“The Holy Spirit moves in the Church and has called you into this special vocation as a successor to the apostles. May you not ever change in your personal goodness, your gentleness and love of your people … as you try to be a Shepherd after the heart of Jesus. Your first duty will be to get to know your priests as well as you can, especially the quirky ones, and love them all… Then you must give great energy to supporting the community-builders among your people, so that they can lead the way for others, becoming lighthouses for your diocese, models for lay involvement and leadership. You will need to show your Religious Sisters how much you love them and trust them, because they are so often the frontline of involvement with the people. Keep talking in snatches of conversation with Jesus, your brother and Lord, through the day. And then, at night when the day is done, you must thank God for your calling and tell God you have done what you can, and now He must do His part!”

In writing such comments to that priest, nervous as he was, I was perhaps looking back at what I hope I might have done myself as Pastor. Whatever that was, God knows, so let me leave it there.