Rebalancing our Church community at Lent

Fr Brian F. McCoy SJ reflects on ritual payback in Aboriginal tradition, and what it might teach us about how we respond to the history of child sexual abuse in the Church.

I remember when I encountered ritual payback for the first time. It was in an Aboriginal community in the Kimberley and in response to a violent death. People had gathered to punish the offender. 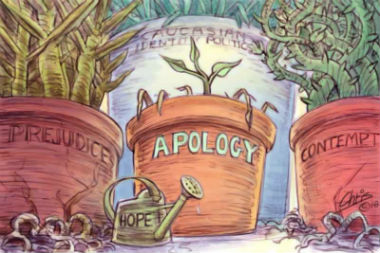 I found the ritual highly tense and deeply emotional. The occasion was serious, with defined parameters around acceptable expressions of violence towards the offender. And then there was the shedding of blood.

It was only much later, and after many conversations, that I came to realise the ritual of payback was ultimately about redressing community balance. A serious form of violence had entered and unbalanced the community. A response was needed — a correction, along with public acknowledgement. Life could go on but only after an attempt was made to rebalance community life with some further suffering.

But rebalancing a community is not easy. An apology involving words can sound cheap. Revenge can continue to lurk. Grief and pain can lie deep and unresolved.

The last two days bring home this grief and pain. Yesterday we remembered the tenth anniversary of then Prime Minister Kevin Rudd’s apology to the Stolen Generations of Aboriginal people.

Like some apologies, it took a long time to come. Some doubt its longer-term effectiveness: did the actions that followed match the words of that day? Some might well argue that the balance these Aboriginal Australians seek with us, and which we all need, is yet to come.

One way, I believe, that we can respond to the bishops’ invitation is to see ourselves as a Catholic community needing to find a new balance, one we lost when children in our care suffered sexual abuse.

This is no easy or quick task. Words can be said and apologies offered, but where is that rebalancing that shows we have listened to those who were most hurt, even accepting some pain and suffering ourselves?

That is why fasting and reparation can help. These actions can help us acknowledge our humanity, weakness and sin. They can help us accept, in small but personal ways, the suffering and pain of others, and open our hearts to living something new.

They can also help us accompany Jesus on his journey. We can look at the payback he accepted, the price he paid for living the truth, leading to the shedding of his blood.

In our Lenten journey may we come to experience a more true balance with God and each other once again.