Michael McVeigh from Jesuit Communications recently sat down with Fr Hans Zollner SJ, a member of the Pontifical Commission for the Protection of Minors, to explore how the Church is responding to the abuse crisis internationally, and what can be learned from our experiences in Australia.

The President of the Centre for Child Protection at the Gregorian University in Rome, and a member of the Pontifical Commission for the Protection of Minors, Fr Hans Zollner SJ, was in Australia recently to speak to Catholic ministry leaders and survivors.

Michael McVeigh from Jesuit Communications sat down with him during the visit to explore how the Church is responding to the abuse crisis internationally, and what can be learned from our experiences in Australia.

MM: This is your third trip to Australia. You’ve visited quite a few other countries to see how the Church is responding to abuse around the world. Can you give us some idea of what the global picture looks like? 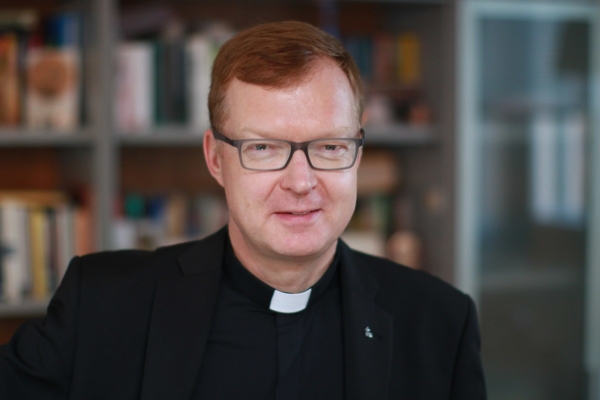 HZ: My understanding, after having visited about 50 countries on five or six continents, is that the Church is really starting to move over the last couple of years on the issue of doing justice to victims, of listening to them, and doing whatever can be done in terms of safeguarding.

I was with the Jesuit Provincials from all over Africa at the end of April, and the President of the Jesuit Assistancy of Africa and Madagascar is very much committed and dedicated to this. He has put up a thorough action plan for formation and for introducing guidelines all over the place. It’s a very considerate and very deliberate effort to do whatever can be done to be proactively engaged as Jesuits in Africa — in a continent where until a few years ago all of this was a foreign language.

One of the challenges of trying to develop this global approach is that you’re dealing with so many cultures, and so many different understandings. How do you bring this together and try to provide training and support religious communities tackling these issues?

This is one of the major questions we have. I think what I can do is stimulate discussion, stimulate reflection, and prepare people as much as possible so that they can do the groundwork.

The Centre for Child Protection at the Gregorian University does not pretend to have the response to every question. Not only because we don’t know the specific contexts — we might know a few of them, but we’re talking about thousands of cultures, we’re talking about hundreds of languages, we’re talking about very diverse legal backgrounds. It varies even sometimes within one country, such as Australia where you have states within the Commonwealth of Australia that have different laws than other states.

I am somebody who tries to elicit and stimulate discussion and reflection. I’m also very happy to listen to people.

You mentioned the need to listen and support victims in being heard. We’ve obviously had the Royal Commission here in Australia, but what are some of the other ways that you’ve seen that the voices of victims are being supported around the world?

In France there is one diocese that has established what they call ‘The Listening Space’. There, victims can come forward and they can express themselves. The bishop is present. It’s an open space in which people who have been hurt tremendously are free at least to express what they want to ask from the Church leadership etc.

There are other places in the USA or in other countries where victims have been invited by dioceses, by Provinces, by the leadership of the Church, to come forward. I have to say that overall I think there is a good will, and there are more people like bishops and provincials who listen to victims than we know. But there is no one model of giving victims not only the space to express themselves and be listened to, but also to engage actively in Church development.

In terms of setting up spaces for support for victims, what are some of the things you’ve seen that could really help — and that we could be considering here in Australia?

One of the major points that many victims bring up is, ‘Can’t we have, within parish settings, within schools settings, a regular conversation going on that includes survivors of abuse as regular members of a committee, a commission, a sounding board, a feedback group or something like that?’ So that this voice is not only brought in on a specific occasion, or where a person feels like he or she is at a point to be able to speak out about it, but [is heard] on a regular basis — build that voice into the system.

That will help all of us. It will help survivors and victims because they will feel welcome and appreciated in the specific experience, and in the specific life challenges, that they went through. Secondly it will help the community at large, because we can at least make ourselves more and more sensitive to what the concerns and specific needs of survivors are — that can also talk to the needs of young people.

M: We have strong groups of survivors here in Australia who have been able to support each other through that process. But what you’re saying is that we need some way of supporting those groups, and supporting those people, through our own institutions as well?

And I think we need to be creative. It will work for one school and one parish and one diocese in one way, and for others in a different way. Because the survivors with whom I am in constant contact, they have quite similar requests, and similar experiences in regard to being welcomed in the Church or not — feeling thrown out or dismissed. But they have also among themselves quite different expectations. So I have learned that you have also to be very forthcoming in accepting the differences in what this specific group, or this specific survivor, wants, requests and needs.