Public engagement on abortion: a US perspective

In the near future, we cannot realistically expect complete agreement among all participants in the abortion debate. Our confidence in the persuasive power of well-articulated defences of pro-life positions sustains us, even as we acknowledge the long struggle ahead.

St Ignatius wrote, ‘In our dealings with others, we ought to speak little but listen much, and when we speak, our few words should be spoken as if the whole world were listening.’ In our public engagement on abortion, we must never forget that our first task is to listen. 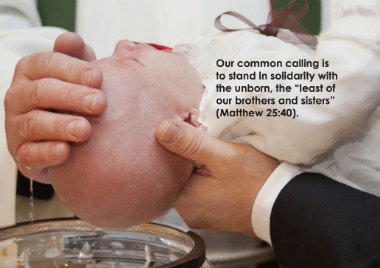 In particular, we listen to the stories of women for whom considering abortion is a lived reality. Our discussions of abortion policy must always be attentive to the human lives, especially women and their children, echoing in the background.

We see this work as an extension of our ministry of reconciliation. Ignatius and the early Jesuits were deeply committed to the work of reconciliation, through hearing confessions and public dialogue on matters of faith.

Recent General Congregations have also emphasised the importance of attending to the world’s wounds of sin and division.

Therefore, at its best, work on this topic will not exacerbate discord, but will be a healing balm for a broken society. Given the deep political divisions in our country, this may seem naïve.

A political context such as ours offers several temptations that we must avoid. One is a retreat from a corrupt world, preserving an illusion of moral purity. The second is moral relativism, which is another kind of retreat. Relativism advances the false claim that multiple conflicting positions about human existence can all be accepted as correct.

The great American Jesuit theologian John Courtney Murray suggests a process where we retreat neither from the world nor from the truth. Instead, we engage those who initially disagree with us, seeking to create an acceptable consensus by building upon those truths on which we can reach agreement, while continuing to persuade and educate those who disagree with our convictions.

This process is ‘proposing, rather than imposing’, and we believe it is the only way to create sustained change in this area.

The fundamental challenge is that this work does not just require a change in policy, but a change in culture. We see great hope in the large number of individuals who are active in pro-life efforts.

But we also see troubling signs as to where our culture is headed. Advances in genetic technology make it much easier to screen for disease and disability in utero. This can be a great gift if used prudently for treatment or preparing couples to care for their children once born.

Yet it is also creating a situation that verges on eugenics, wherein persons deemed less than perfect are eliminated before they are even born. It is also increasingly easy to access pharmaceuticals that act as abortifacients.

We take these realities as evidence that we must give those committed to this work more tools for engagement.

A regular criticism from abortion rights advocates is the narrow focus of the pro-life movement on abortion to the exclusion of life issues such as the death penalty, economic justice, access to health care, or warfare. Sadly, this criticism is sometimes valid.

Effective advocacy will not dismiss this challenge, but see it as an opportunity to broaden the coalition of individuals interested in shaping our culture to one that respects human life in all its forms. We have the best chance of effecting change on abortion if our pro-life narrative is consistent and comprehensive.

We are committed to narrowing the gap between the current civil law and the demands of the moral law as we understand it. Our long-term goal remains full legal recognition of and protection for the unborn child — from the moment of conception.

In the near future, we cannot realistically expect complete agreement among all participants in the abortion debate. Our confidence in the persuasive power of well-articulated defences of pro-life positions sustains us, even as we acknowledge the long struggle ahead.

Our common calling is to stand in solidarity with the unborn, the ‘least of our brothers and sisters’ (Matthew 25:40), through prayer and political activism. It is our desire that Jesuits, along with their colleagues, will continue to offer a consistent message of respect for life, especially for unborn children.

This is an edited extract from a statement from the Society of Jesus in the United States. Read the full statement here.