In good company, in a good cause: Jesuit Assembly 2017

'These days we’ve had occasion to ponder and rest our bruised feet, to recall the straw beds on the journey, to feel the caress of the kind hands, and to bend the knees in lament.' - Fr Frank Brennan SJ

A Jesuit Assembly was held at Peter Canisius House on July 11 and 12. Most Australian Jesuits, including many whose ministry is outside Australia, attended the meeting. 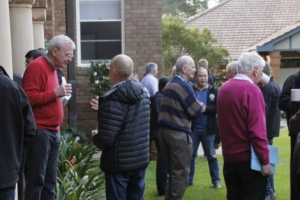 The Assembly, which was preceded by a day of prayer, was part of a program of reflection and renewal of the Province Mission. It offered space for people to share their experiences and hopes for their Jesuit life and ministry and their reflections on future Jesuit ministry.

The conversation focused on the context of our ministry, and in particular the crisis caused by child sexual abuse, on the quality of community life and on the three Province foundations for mission — Ignatian Spirituality, Solidarity between Jesuit and Lay people and Mission with the Poor.

It was also an occasion to enjoy one another’s company and to mark significant anniversaries of entering the Society and of priesthood. It was the first gathering of Jesuits to be photographed by a drone, surely a sign of adaptation to the world of the future.

Being in good company, in a good cause — Homily by Fr Frank Brennan SJ

In the rhythm of today’s gospel, these are the names of the 18 Jubilarians:

Antony the nephew of Basil, Robert, Ian the son of Eccles, and Terence

Peter whose birthday is tomorrow, Stephen the son of Henry, Andrew, and Michael

These 18 with such a variety of gifts but the same Spirit, and not just the same formation, were sent out with instructions to seek reconciliation with God, with one another, and with creation.

They, like all of us, were sent out on mission to proclaim the nearness of the kingdom, to engage in battle with evil, and to offer healing to the wounded, the sick and the hurt. Or to adopt the words of our most recent General Congregation: they were ‘summoned to join the Lord in caring for the neediest and to extend God’s mercy to where injustice, suffering or despair seem to thwart the divine plan’. We know that the more exemplary amongst us have always continued to minister fraternally amongst those of us who are lost in our own Jerusalems whilst then going further afield amongst the Gentiles and the towns of the Samaritans.

These days we’ve had occasion to ponder and rest our bruised feet, to recall the straw beds on the journey, to feel the caress of the kind hands, and to bend the knees in lament. We know that there’s always a plan in the offing. As circumstances and numbers change expectedly or unexpectedly, we refine those plans or trust Brian our provincial, his consultors and others to do it for us.  Listening in small groups, in clusters and in the whole, we’ve been able to ‘Conceive and shape our ministry Through lives well earthed and God aware’.

The contemporary rendition of our ministry has been classed with 3 foundations. When allocated to a small group to discuss Ignatian spirituality, I was heard to utter irreverently that we had drawn the short straw. I am one of our company who always fears that the gap between the rhetoric and reality of Ignatian spirituality is almost too wide for even grace to do the work in my own life. We all treasure deep interior freedom, indifference, discernment, the magis and finding God in all things. But some of us find that the mess and complexity of life and our world preclude a spiritual journey calibrated into four weeks, with three degrees of humility, and two standards.

We all espouse our solidarity between Jesuits and lay people, but if we’re honest, we continue to harbour the suspicion or the hope that we are special. After all, it’s only 12 who are named in today’s gospel, and not all comers, most of whom remain anonymous. Now in the wake of the royal commission, we know that we can do nothing credible and trustworthy without lay people. If we try and find solutions just amongst ourselves we will perpetuate the clericalist mindset which has caused us so many problems.

Ever since GC32 when I was a novice here at Canisius with Peter Hosking and Steve Astill, we have been espousing our Mission with the Poor. Now with an ex-provincial and participant in previous congregations as pope, we wonder about the Francis effect in our own lives, in our province, in our least Society. We are blessed but also slightly perplexed in having one of our own as pope. When our Jesuit rhetoric of faith and justice is given universal application through a papal amplifier it can be rather daunting. Pope Francis tells us, ‘I want a Church which is poor and for the poor.’ (Evangelii Gaudium #198) Do we want a Society of Jesus which is actually poor and for the poor? Do we pray for a province which is poor and on the side of the poor and therefore against those who are not? Or do we still yearn for a province which is rich and well connected even if it be, or especially if it be, to do more for the poor? Is that yearning to have access to all available means the work of the bad spirit? Or is it the good spirit allowing the truly indifferent to magnify solidarity with the poor?

Moving from the three foundations of ministry to our Jesuit life, we have confronted diminishment, despair and even detraction. When I was a scholastic, I attended one of those many scholastic meetings at Anglesea. At the end of the meeting, Michael McGirr in his inimitable way said that it had been a very good meeting because people were always asking him how many Jesuits there were in formation. Now he knew. There was a roomful and there always would be.

In the past at province meetings we have come together at Riverview in a much larger hall and in a much larger chapel. But here we have gathered together in a hall full of Jesuits and a chapel full of us, and there always will be.

We first met as a province in 1989 at Riverview. Peter Steele our provincial gave us ‘A Province on Mission to the World’. Ten years later, this is how Peter concluded his reflection on that same Mission Statement:

Let me end with two images. Some weeks ago I went to a fine large circus – Ringling Brothers and Barnum and Bailey’s Circus, to be exact. It was deeply politically incorrect in that it had fourteen elephants: but it was deeply politically correct in that its final act was one in which both a man and a woman were shot simultaneously out of a double barrel cannon. Not for the first time, I thought of the analogies between a circus and the Society, a circus and humanity. All in all, it was impossible to regret being there.

That image of the learned literature professor at the circus surrounded by 14 elephants in the room and a human catapult marked by gender equality should continue to sustain us.

Peter then concluded with the second image – ‘a beautiful image that we are returned to at the end of the Exercises, namely that divine Fountain which we believe to be given to humanity, not in a world without taint, mortality, or broken hearts, but in just that world which each of us brings here, as though it were each man’s shadow. We have God’s word for it that He is its providence. We have the warranted hope that we, his children, are also its servants. We are surely in good company, in a good cause.’

That reassurance of last century that we are surely in good company, in a good cause should continue to animate us as we pray again the liturgy of lament:

As your spirit of Justice is needed,

As your spirit of Truth is needed,

May it enlighten and liberate;

As your spirit of Compassion is needed,

May it be deeply experienced;

As your spirit of Hope is needed,

May it change hearts and minds;

As your spirit of Healing is needed,

May it restore and renew.

The conclusion of Peter Steele’s 1989 Mission Statement is all the more poignant now that he has died, leaving the proclamation of hope amongst the living to us:

‘The policies we adopt and the choice we take should be informed by the hope that St Paul’s “new creation” or “wholly new creature” has historical as well as apocalyptic reference. We ourselves have received benefits from our begetters in the Society, as have the members, in each generation of the Church. In turn, like them, we are building a future which we will not see. In that we are like our earthly Lord. Of that future, like the earlier generations, we know little or nothing, except that He, resurrected, will continue to be its Lord. Because of that, and in the face of every adversity, intimate or public, we know that our watchword must continue to be, as the Second Vatican Council has taught us in our time, “joy and hope”.’

Building and crossing bridges whether in Venice or Melbourne, rather than building walls and injuncting others from entry, we have gathered these days praying for ‘the courage and the freedom to dare the (inflamed) audacity of the “improbable,” as we respond to God’s call with the humility of those who know that, in this service where the human person engages all their energy, everything depends on God.’( Decree 1, GC 36, Decree 1: Companions in a Mission of Reconciliation and Justice, quoting in part the opening homily of Rev. Bruno Cadoré, O.P.)

Having affirmed each other’s gifts in the same spirit, let’s refresh ourselves at the table of the Lord and go forth in joy and hope proclaiming that the kingdom is very near in our disrupted world, in our discredited Church and in our diminished Society. Despite and because of the disruption, discrediting and diminishment, we are in good company, in a good cause, friends in the Lord, friends of the Lord who suffered and died so that others might live life to the full. For you have searched us Lord, and you know us. All our ways lie open to you.

Having shared the bread and wine of the Eucharist, let’s put out into the deep and cast our nets wide, with joy and hope.