Fr Kevin Penry SJ: A priest with just one homily

‘I used to tease him and tell him that he had only one homily – and that was that God loved you', said Fr Kevin Penry SJ's long time friend Sr Helen Carboon at his funeral on 28 July. 'In whatever guise he preached it, that was always the central message. And really, what other homily do you need?’

Family and friends joined many Jesuits at Immaculate Conception Church in Hawthorn on Friday 28 July to remember the life of Fr Kevin Penry SJ. 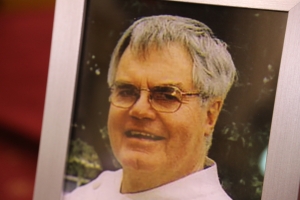 Fr Kevin died on Monday 24 July after a long illness, and was remembered at the funeral for his accompaniment and spiritual direction in particular.

Fr Pat O’Sullivan SJ gave the homily at the funeral. He remarked on Kevin’s many different appointments over the years, and the many different ways he shared his talents – teaching in the schools, adult education, parish work, hospital chaplaincy, seminary work in Fiji, assistant director at Corpus Christi Greenvale, helping with the care of senior Jesuits.

But the ministry he is most remembered for is his work in the area of spirituality. Fr Pat noted that he’d learned a great deal from his Jesuit brother.

‘Kevin was a man for friendship, and that was because his deepest relationship in this life was his friendship with Jesus’, said Fr Pat.

His younger brother, Vincent Penry, remembered a Jesuit who was at times ‘a bit of a rebel’, but who was also someone he could go to for advice and support.

‘Kev became my life coach, and possibly my life-after-life coach. If anything needed sorting out, I would spend some time with Kev’, he said in his eulogy.

‘I thank God for Kev’s life amongst us. And I thank all those who cared for Kevin and who have shown him kindness over these last years.’ 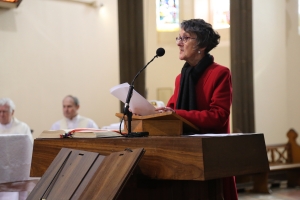 Also speaking at the funeral was Kevin’s long-time friend Sr Helen Carboon PVBM, who was among those who cared for him after his car accident in 2009.

‘These were difficult years of transition for him’, she said of the time after Fr Kevin’s accident. ‘From a full and free and very active, very mobile life, to one of increasing frailty and limits, and total loss of independence.’

‘[However] it was certainly a privilege to be with him as he struggled to come to terms with his limitations. And it was something of a profound adventure, not necessarily one you would choose, in discovering new depths and dimensions to what could be seen as a very restricted existence. For as Kevin’s outer world contracted, his inner world grew larger and more expansive.’

Just recently, she said, they had spoken together about the Prayer of St Ignatius:

Take, Lord, and receive all my liberty, my memory, my understanding, and my entire will, all I have and call my own. You have given all to me. To you, Lord, I return it. Everything is yours; do with it what you will. Give me only your love and your grace, that is enough for me. 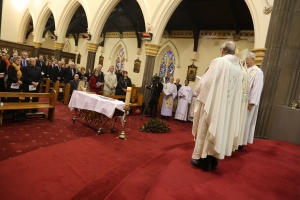 She said, ‘It seemed to us both that he was now living this prayer in his own day to day experience, in his own body. His liberty, much of his memory and understanding, were all gradually being taken from him. And it was the love and grace of his God that increasingly were more than enough for him’, she said.

Sr Helen said she would remember Fr Kevin’s spiritual wisdom, and the simple message that he shared with others around him.

‘I used to tease him and tell him that he had only one homily – and that was that God loved you. In whatever guise he preached it, that was always the central message. And really, what other homily do you need?’