The text of the exchanges between Francis and the local Jesuits in Myanmar and Bangladesh have been published in La Civilta Cattolica.

From 26 November to 2 December, Pope Francis travelled to Myanmar and Bangladesh on his 21st international apostolic voyage. 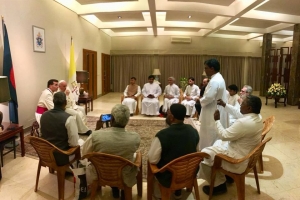 On Wednesday 29 November, following his encounter with the bishops of Myanmar, Francis entered the chapel on the ground floor of the archbishop’s house to meet 31 Jesuits based in the country.

Francis sat down and said he needed an English translator, promptly presenting Msgr Mark Miles. Jokingly, the Pope said, ‘He is a good man and will not reveal any of the Jesuit secrets we will talk about here.’ Then he spontaneously thanked those present.

On the afternoon of 1 December, in Bangladesh, the Pope met a group of Rohingya. He welcomed them, listened to their stories, and asked one of them to pray.

At the end, he went to the Apostolic Nunciature in Dhaka, where 13 Jesuits who carry out their mission in that country were waiting for him in a room, seated in a circle.

The text of the exchanges between Francis and the local Jesuits have been published in La Civilta Cattolica. Click here to read full text